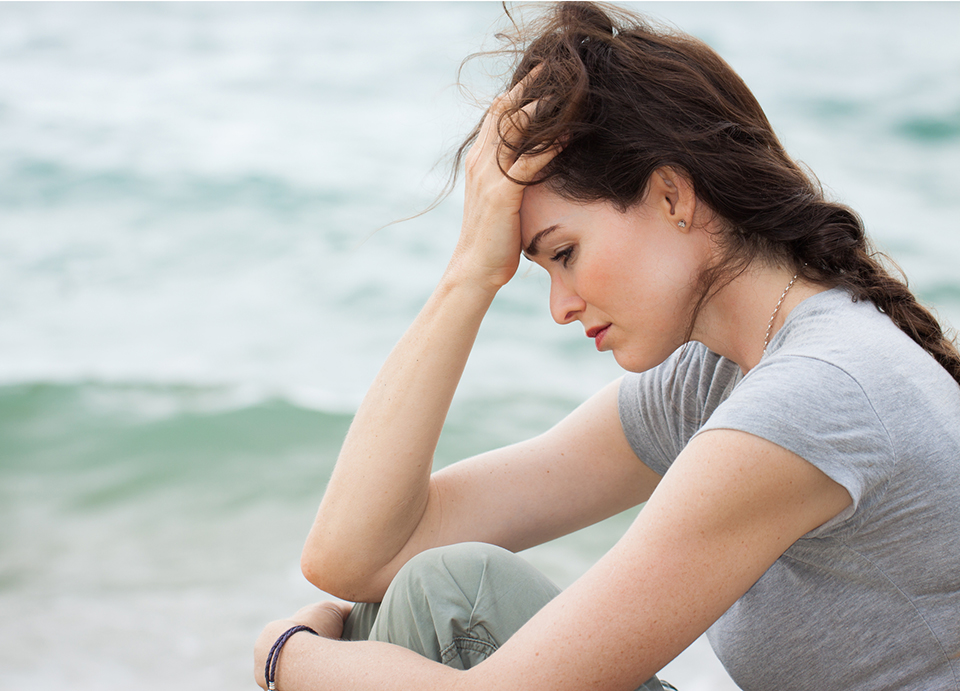 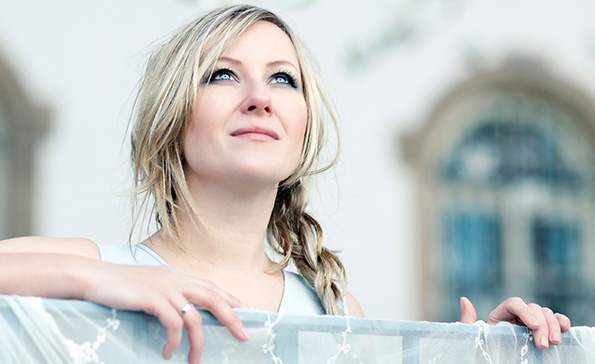 Summary: Antidepressants can significantly help people with major depressive disorders, but they typically offer little relief to people with milder forms of depression. If you’re looking for natural ways to cope with mild depression—or if you’re already on SSRIs and want to complement their effects—consider these nutrients and supplements.

The occasional down day and even short stretches of the blues are a natural part of life. The Centers for Disease Control estimates that one-in-ten Americans (people ages 40 to 59 in particular) suffer from depression at one point or another. Seeking help to regain a more positive emotional balance is a healthy step. But for people with persistent mild depression, are prescription antidepressants the answer?

Like many natural health practitioners, Tieraona Low Dog, MD, at the University of Arizona Center for Integrative Medicine in Tucson, questions the overuse of antidepressants, the most commonly prescribed medication for people ages 18 to 44. Antidepressants are now used for conditions that go beyond depression, such as anxiety disorders, pain, and menopausal symptoms, says Low Dog, who serves on Delicious Living’s advisory board. “Some are FDA-approved uses, some are off-label uses. But the number of antidepressant prescriptions for children and adolescents as well as adults is growing exponentially and is a little bit scary.”

Antidepressants can significantly help people with major depressive disorders, but they typically offer little relief to people with milder forms of depression, according to a 2010 study in the Journal of the American Medical Association. And like any drug, antidepressants can cause unwanted side effects. Researchers are finding that natural strategies—including regular exercise, eating a healthy diet rich in omega-3s, meditation and stress relief, practicing gratitude, and enjoying a strong community of family and friends—can mitigate depression symptoms and boost mood over time.

If you have symptoms of depression, including feelings of sadness, a loss of interest in normal activities, and difficulty concentrating, consult your health practitioner for advice. And if you’re currently taking or considering taking a selective serotonin reuptake inhibitor (SSRI), the common class of antidepressants, read on for Low Dog’s tips on how the right supplements and nutrients can support your body and mood.

St. John’s wort. According to a 2009 review published in Evidence-Based Mental Health, St. John’s wort extracts used in clinical trials were as effective as prescription antidepressants, had fewer side effects, and were superior to a placebo. “St. John’s wort is appropriate if you’re not taking any other medications and you have mild depression, possibly with some anxiety, because it also reduces anxiety,” says Low Dog. “For example, if you’re a 24-year-old and you have mild depression and a little anxiousness and aren’t on medication, St. John’s wort may be appropriate for you.” However, it interacts with a lot of medications, including SSRI antidepressants and birth control pills, so only take under a doctor’s supervision, Low Dog warns.

S-adenosylmethionine (SAMe). “A lot of people think of SAMe as nature’s Wellbutrin,” says Low Dog. “Very good studies show that SAMe, a naturally occurring compound in the body, can be as effective as antidepressants. This is for the person who is what we call dysthymic: melancholic, low energy, fatigued, not motivated. SAMe is considered a stimulating antidepressant, so you would never give this to someone who is anxious or agitated and certainly not to someone bipolar. It’s also highly effective for pain, so it’s the right supplement for people who have arthritis, fibromyalgia, and dysthymia with depression,” she says. SAMe is available over-the-counter. Start by taking 200 mg once or twice a day; then increase by 200 mg every five to seven days until you reach about 1,000 mg daily, Low Dog advises. “Older people generally need less.”

Rhodiola. “This has been studied in Scandinavia for depression, and a UCLA study looked at it for generalized anxiety disorder,” says Low Dog. “It helps with people who are under a lot of stress or who have mild forms of depression, fatigue, and anxiety. Rhodiola was traditionally used to help prevent colds and flu, so when someone says, ‘I feel kind of depressed, and I’ve gotten sick five times this year,’ rhodiola may be a good choice.” Start with 150–200 mg daily of extract standardized to 3 percent rosavin and about 1 percent salidroside, the active compounds. “Stay on that for five to seven days; then you can increase the dose to 400–500 mg if necessary. Most people need between 300 mg and 500 mg per day of the standardized extract,” Low Dog says.

L-theanine. “Some people have depression, but the anxiousness is what really bothers them,” says Low Dog. “In that case, don’t forget green tea. Have yourself a cup of green, oolong, or even black tea (green and oolong have less caffeine); these teas help focus, calm, and quiet you because of the L-theanine amino acid. Or you can take L-theanine as a supplement, 100–200 mg two to three times per day. I tell patients, ‘Look, just keep this with you, take it in your purse, and if you feel like you’re getting into an anxious situation, the boss is yelling at you, or you’re at school, you have a big test and you need to be alert but you have a lot of test anxiety, just take 200 mg.’ It’s nonsedating but it just calms you down. It’s a much better alternative than [the anti-anxiety drug] Ativan for milder forms of anxiety.

If you’re taking an SSRI antidepressant, work with a health care provider to supplement with nutrients that complement your medication, says Low Dog. 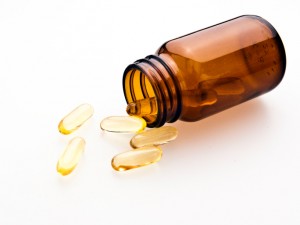 Omega-3 fatty acids. “Fish oil, which is rich in omega-3 essential fats, seems to help an antidepressant work better, but it doesn’t [produce] an interaction,” she says. In her practice, she recommends 1,000 mg EPA per day. “You really need to get up to that amount of EPA to get the benefits.” A key point: “Please, please, please remember to take fish oil with the largest meal of the day. You have to take it with some fat; otherwise you won’t absorb it. I usually tell people to take fish oil at dinner because that tends to be people’s largest meal.”

B vitamins. Low Dog recommends taking a multivitamin with solid doses of B vitamins or B-complex stress formula with high-dose folic acid, B6, and B12, all of which are needed for the body to make neurotransmitters such as serotonin. “While SSRIs keep neurotransmitters around longer, if you can’t make enough, you’re only going to get a modest effect from antidepressants. And when people are under a lot of stress, they burn through those B’s. So if you’re taking an antidepressant and you’re not getting the full effect, make sure you talk to your health care provider [about supplemental B vitamins].”

“[Prescription antidepressants] can have a number of side effects, ranging from mild—such as dry mouth, insomnia, and headaches—that go away in three or four weeks, to problems that typically do not,” says Tieraona Low Dog, MD. If you notice any of these effects, inform your health care provider; a different dose or medication may be in order.

Weight gain. “Some selective serotonin reuptake inhibitors [SSRIs, common antidepressants] stimulate appetite centers,” says Low Dog; “in other cases, patients who feel less depressed are hungry and want to eat more. Paxil is commonly associated with weight gain, as is Trazodone and many tricyclic antidepressants; other SSRIs, such as Lexapro, are not.”

Sexual dysfunction. “This is a huge one for many people,” says Low Dog. “It’s really hard when a woman tells me, ‘I had more libido when I was depressed than I do now.’ We focus on men because of erectile dysfunction and sort of ignore that [some] women [taking antidepressants] not only are not able to achieve orgasm but have completely lost their libido.”

Mania. “If you put a patient on an antidepressant and that person has undiagnosed bipolar disorder, it may induce a manic episode,” Low Dog says. “This is something we try to be very careful with in teenagers in particular, when you may not be able to diagnose bipolar yet. [An antidepressant] can throw them into this mania. We tell parents this a lot: If your teen is being more aggressive, angry, agitated, and seems to have more anxiety, that is a clear indication that this antidepressant is bringing out that manic aspect.”