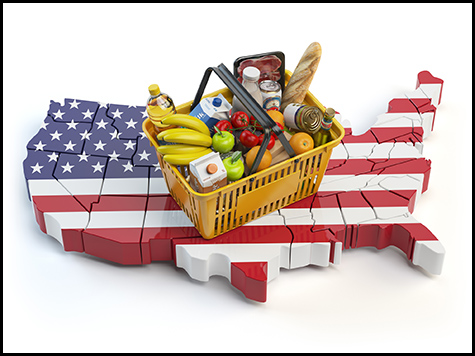 Obesity in the U.S. has reached a new high with a 5 percent increase since last year, according to a report published Wednesday ranking the healthiest states in the country.

About 31.3 percent of U.S. adults are obese, up from 29.9 percent last year, according to the United Health Foundation’s annual report.

“That’s incredibly concerning to us as a nation that this trend is going in the wrong direction instead of improving,” said Dr. Rhonda Randall, an adviser on the report. “This is something that is very much an opportunity to us — as individuals, as communities, at a state level and at a national level — to turn it around.”

Hawaii is ranked as the healthiest state this year, with a low prevalence of obesity, smoking, depression and air pollution. The Aloha State also counts a high number of primary care doctors. However, 21 percent of adult Hawaiians — compared with the national average of 19 percent — overindulge in alcohol.

Massachusetts, No. 1 last year, is the No. 2 healthiest state this year, followed by Connecticut, Vermont and Utah.

What these states have in common and with those in the top 10 is a focus on healthy individual behavior, said Dr. Randall, chief medical officer for United Healthcare National Markets.

“These are generally states that have lower smoking rates, higher rates of physical activity, lower rates of obesity, more focused on prevention and wellness, things like vaccination and access to primary care,” she said.

Louisiana ranks last, with high rates of mental illness and low birth weight, and a high percentage of children living in poverty, which puts them at risk for chronic stress from instability at home, food insecurity and unreliable access to medical care.

“When our children are living in poverty, it puts greater pressure on the ability for them to live healthier lives over the course of their entire life,” Dr. Randall said.

The other four states with the worst health records are Mississippi, Alabama, Oklahoma and Arkansas.

Overall, the national health statistics are grim, with high rates of obesity joined by an increase of deaths from heart disease. Despite an overall decrease in cancer deaths in the country, at least 30 states have increasing rates or no meaningful changes.

The report also found that suicides are on the rise and that Americans more frequently are reporting long periods of depression, stress and anxiety. At least 1 in 8 Americans report frequent mental distress.

Though more mental health professionals and primary care doctors are available than last year, they are not evenly distributed at the state and community levels.

The United Health Foundation on Wednesday will launch a website where all state health statistics can be viewed and adjusted to see how a particular factor affects a ranking, Dr. Randall said. The goal is to better help policymakers visualize what health factors make the biggest impact on wellness.

“So a state like Kentucky, for example, if they put a lot of effort on smoking and decreasing the rate on tobacco use, there would be a likelihood that their rank would move higher than 49 … and each state can do that,” Dr. Randall said. “The ‘adjust my rank’ tool can be very beneficial to understanding where to invest and what resources.”

Also promising, the childhood poverty level declined by 6 percent overall, with a national rate of 18.4 percent this year compared with 19.5 percent in 2017.