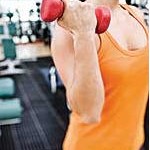 Findings published in PLoS ONE demonstrate a protective effect for brief periods of exercise against stress-induced damage to telomeres: pieces of DNA that cap and protect the ends of chromosomes which play an important role in cellular aging.*

Elissa Epel, PhD and her associates evaluated the effect of exercise in 63 women with varying levels of stress during the prior month as assessed via the 10-item Perceived Stress Scale. The women were divided into an active group, who engaged in vigorous exercise for an average of at least 33 minutes daily, and a sedentary group.

Among inactive women, a one-unit increase in the Perceived Stress Scale was related to a 15-fold greater risk of having short white blood cell telomeres, while stress did not appear to affect the active group. “Even a moderate amount of vigorous exercise appears to provide a critical amount of protection for the telomeres,” stated Dr. Epel.