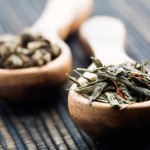 Be it work, finances, relationships, or health issues, most of us experience stressful events at some point in our lives. But today, researchers are witnessing levels of stress that are virtually unprecedented.

The effects of this pandemic on the public health are profound.

Researchers have linked the cumulative impact of stress to a host of age-acceleratingconditions and degenerative diseases.

These range from cardiovascular disease to diabetes to various cancers.

The good news is that recent confirmatory data show targeted nutritional interventions exert a beneficial effect on many of the biological risk factors produced by stress.

Two natural compounds in particular have been shown to reduce stress levels, enhance attention and productivity, and lower many stress-related factors associated with risk of death.

In this article you’ll learn the most recent data on the stress-relieving properties of lemon balm, a common garden herb, and L-theanine, an amino acid found exclusively in tea.

Lemon balm has been shown to exert a calming effect in healthy individuals, while L-theanine has been found to soothe anxiety, without side effects.

Lemon balm is a common garden herb closely related to mint. It has been prized in traditional cultures for its capacity to induce sleep and mild sedation, as well as for its memory-enhancing properties. Modern-day laboratory techniques reveal some of the underlying mechanisms of lemon balm’s clinically proven efficacy.

Lemon balm and rosmarinic acid also boost levels of the relaxation-inducing neurotransmitter called GABA in the brain. They do so by inhibiting the enzyme that normally degrades GABA. The result of these lemon balm – induced elevations of GABA is a reduction in anxiety. Increasing brain GABA activity is the mechanism by which prescription anti-anxiety drugs act as well, though they can lead to chemical dependency and side effects.

Lemon balm also modulates the important neurotransmitter acetylcholine, the levels of which are reduced in Alzheimer’s disease and other neurodegenerative conditions. Rosmarinic acid inhibits acetylcholinesterase, the enzyme that breaks down acetylcholine and reduces its availability to brain cells. This effect is similar to that produced by prescription drugs meant to treat Alzheimer’s disease.

Human studies of lemon balm are equally compelling, as demonstrated in a series of trials conducted in the Human Cognitive Neuroscience Unit at the University of Northumbria in the United Kingdom. Researchers there found that 600 mg of lemon balm produced sustained improvements in a test of “accuracy of attention.” Three hundred milligrams of lemon balm produced an increase in self-rated calmness in a group of healthy adults, while 900 mg of lemon balm reduced self-rated alertness. That latter finding is a desirable effect in a supplement meant to produce relaxation.

The British researchers next evaluated lemon balm in a more challenging test, namely in a setting in which subjects are deliberately stressed in the laboratory. They gave 18 healthy volunteers doses of 300 or 600 mg of lemon balm, or a placebo, and then subjected them to the Defined Intensity Stressor Simulation, a battery of challenges designed to impose stress. The higher dose counteracted the negative mood effects of the stress test, while significantly increasing self-ratings of calmness and again reducing self-ratings of alertness. Similar results were later shown with a supplement containing both lemon balm and valerian root, another natural sedative.

Interestingly, the lower dose of lemon balm (300 mg) also increases the speed of mathematical processing, with no reduction in accuracy, in human studies. That observation, combined with some findings about the molecular actions of rosmarinic acid, has led scientists to examine lemon balm’s effects in Alzheimer’s disease and other conditions of cognitive impairment.

The antioxidant protection provided by lemon balm shows promise in reducing oxidant-related brain cell death, an important contributor to Alzheimer’s and Parkinson’s diseases as well as age-related cognitive decline. Lemon balm and its components are also highly effective at reducing accumulations of the harmful amyloid-beta, a protein that is a leading contributor to Alzheimer’s disease. Lemon balm’s ability to inhibit the enzyme acetylcholinesterase boosts brain levels of the neurotransmitter acetylcholine, which are low in Alzheimer’s. These and other mechanisms of lemon balm and its components are credited with improving cognitive performance in maze experiments with animals.

L-theanine is a non-protein amino acid found exclusively in green tea. It contributes significantly to the favorable taste of green tea and has numerous health-promoting benefits. It has traditionally been used to enhance relaxation and improve concentration and learning ability. Those features have modern scientists interested in its potential as a natural stress-reliever.

Animal studies verify the behavioral benefits of these biochemical effects. In isolated rat brain slices, L-theanine reduces electrical activity associated with anxiety. L-theanine reduces evidence of anxiety and depression in several different animal models of stress. In freely moving rats, L-theanine led to decreases in nearly all frequencies of brainwave activity, indicating a state of calmness and relaxation. That is hardly surprising: L-theanine is known to be synergistic with the GABA-enhancing anti-anxiety drug midazolam, a relative of Valium®.

Brainwave studies have shed some light on how L-theanine achieves its remarkable anxiety-reducing effects. In one study, healthy subjects took a soft drink containing green tea enriched with L-theanine while their brainwave power was measured. Power was initially reduced in all frequencies and areas during the first hour, indicating relaxation. Later changes indicated both an increase in mental performance and a higher degree of relaxation. In this case, L-theanine seemed to produce desirable increases in attention, accompanied by durable relaxation – that means subjects could concentrate better without being distracted by anxiety.

Another brainwave study demonstrated that L-theanine significantly increased activity in the frequency band indicating relaxation without inducing drowsiness. And a third concluded that L-theanine plays a general role in sustaining attention during a long-term difficult task. That’s important, because it is known that while stress and anxiety can reduce your ability to maintain attention and focus, promoting attention and focus is an effective way of reducing your stress and anxiety.

Another way to assess stress and anxiety is by measuring vital signs such as heart rate and salivary content of certain proteins that are increased during stress. Japanese researchers did just that with 12 subjects during a mental arithmetic test given as an acute stressor. Results showed that the supplement reduced heart rate and salivary protein responses to the acute stress task, compared with placebo. In addition, heart rate variability was improved, a sign that the L-theanine was reducing activation of the sympathetic nervous system, or “fight-or-flight” response. Improved heart rate variability is a protective factor against cardiovascular disease, so L-theanine’s anti-stress effects in this case are also indirectly cardioprotective.

Unfortunately, the amounts of L-theanine in a regular cup of caffeinated green tea are not large enough to produce the anti-anxiety effects, meaning supplementation is necessary. Most studies of L-theanine showing benefits use doses of between 100 and 250 mg per day, while a cup of green tea typically contains 20 mg or less.

L-theanine’s many neuroprotective effects make it an attractive natural product for preventing and treating disorders such as Alzheimer’s disease. A placebo-controlled clinical study in mid-2011 examined the effects of L-theanine and green tea extract on memory and attention in a group of adults with mild cognitive impairment. Mild cognitive impairment is often seen as a precursor or risk factor for Alzheimer’s disease. The supplemented group experienced improvements in memory and selective attention (the ability to attend to one task without being distracted by others). Brain waves indicative of cognitive alertness were significantly increased by the supplement as well.

Stress and anxiety plague 80% of Americans. Far from being mere annoyances, these psychological conditions have profound physical implications. It is no exaggeration to say that stress can shorten your life.

Prescription sedatives and anti-anxiety drugs have some short-term benefit in reducing symptoms, but their long-term safety and effectiveness has not been established, and they carry risks of significant side effects, tolerance (loss of efficacy) and addiction.

Lemon balm and L-theanine, on the other hand, offer powerful protection against stress and anxiety through distinct and complementary mechanisms. Both have been shown to reduce not only stress but the biological manifestations it produces in the body and brain. And both have additional neuroprotective characteristics as well. If you suffer from stress and anxiety, consider adding a combination supplement containing high-quality lemon balm and L-theanine to your health maintenance regimen.