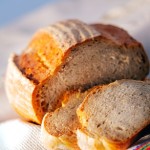 The FDA’s food pyramid says you should be eating between 6-10 servings of ‘whole grains’ every day.  For many people that translates into several wheat-based products throughout the day like toast or waffles for breakfast, a sandwich for lunch, wheat-based croutons on your salad, wheat in soups and other processed foods, etc.  At the same time, you notice that, despite eating what you think is a healthy, food pyramid endorsed-diet and exercising, you can’t seem to get rid of that roll of belly fat.

Not only that, your doctor recently may have started putting question marks after your fasting blood sugar levels as they are a little higher than they should be. Did you ever think that your belly fat and your abnormal blood sugar levels may actually be tied to eating all those “healthy” whole grains? Well, there’s a school of thought that says exactly that and more.  Let me tell you about it.

Are Super-Starches Making You Sick?

Thousands of years ago when our ancestors started harvesting wheat to eat as food, we ate something called einkorn, or farro, wheat.  According to Einkorn.com, einkorn is a German word meaning “one kernel”, as it refers to the one kernel per spikelet on the head of the grain plant.  Einkorn has a simple, diploid (two cell) genetic structure with 14 chromosomes.  Ancient wheat was a tall, willowy blond plant that waved gracefully in the wind.

The “wheat” we eat today, though, is genetically much different.  So different, in fact, that it’s garnered the nickname “frankenwheat” – after Frankenstein, the “monster” man created by a scientist who put random body parts together and brought it to life with electricity.

Modern wheat is now hexaploid (six-celled) with 42 chromosomes after selective cross-breeding and hybridization started some 50 years ago in an attempt to make it disease resistant with greater yields.  It’s also much shorter in height – about 2 feet – making it stockier to support its heavier seedbed.  But with that added strength and yields many researchers and integrative medicine doctors feel this type of modern dwarf wheat has adversely affected your health.  Here’s how:

Research out of The Netherlands Plant Research International in 2010, revealed that modern wheat “breeding” likely has contributed to the rise in CD – celiac disease (gluten sensitivity).  Their study showed that CD has significantly increased in the last few decades since wheat breeding began and that ‘increased wheat and gluten consumption is considered a major cause’. Modern wheat, their study showed, contains much more of the gluten proteins that fuels CD versus wheat that was grown over 100 years ago.

Not only is modern wheat a “super-gluten”, it also is a “super-starch” being full of a dense starch called amylopectin A.  This starch, although it can be a baker’s friend making cakes and pastries richer and fuller, it can also create blood sugar spikes with resultant belly fat gain.  Could this be why we’ve seen an epidemic rise in type 2 diabetes in the last few decades?  Many physician/researchers think so.

In his book, Wheat Belly, cardiologist, Dr. William Davis, explained that amylopectin A is more easily converted to sugar than even the simplest of sugars – table sugar.  Two slices of wheat toast, he says, increases blood sugar levels higher than a candy bar!

Add to that, modern wheat contains certain wheat polypeptides calledgluteomorphins which trigger the pleasure centers in the brain.  This causes an opiate-like response every time you eat a wheat-containing food.

The upshot?  Not only is this super-wheat constantly ratcheting up your insulin levels and making your belly get fatter and fatter, you can actually become addicted to it, like a drug, craving more and more of it. That may explain why trying to eat just a few wheat crackers, or cookies made from wheat flour, can lead to eating the whole bag.

But that’s not all, other researchers say.  In addition to contributing to celiac disease, type 2 diabetes, and obesity, super-starch wheat is thought to also cause widespread inflammation throughout your body.  It likely does this by raising blood sugar levels so high that is causes blood to become much more acidic and inflammatory.

Inflammation, medical researchers now agree, is thought to be the big culprit behind many, if not all, disease states, including cancer. In fact, an Italian study done in 2007 found that people who ate a lot of bread had higher incidences of kidney cancer.

What Can You Do To Avoid Bad Health from Super-Wheats?

If you eat wheat products, and are plagued by abnormal blood sugars/type 2 diabetes, resistant belly fat, stomach bloating and/or intestinal distress with constipation/diarrhea/cramps, and other conditions and symptoms, cut out all wheat products from your diet for 2 weeks and see how you feel.  Be sure to read labels of any processed foods you may eat as foods you may not think of as “grains” can contain wheat.

You can also try other non-wheat grains like quinoa, or amaranth, or spelt and see how you do with those. You can even buy “ancient einkorn” type wheat to make your own bread which is available at health food stores or online.  Yet, despite what the FDA tells us in their food pyramid of “healthy eating”, there is no real reason to eat grains period. You can get all the fiber you need from fruits, vegetables and legumes.

Many researchers feel that our bodies have not evolved enough to be able to process cereal-grains and may be why we become fat and sick from eating them. Keep in mind that our paleo-ancestors thrived quite healthily on non-grain diets.  Returning to that way of eating, even somewhat, may help reduce the type 2 diabetes epidemic and, perhaps, many more diseases.