A Bag of Popcorn, a Can of Beer: Recipe for Alzheimer’s? 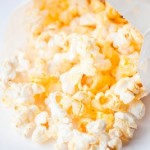 After a busy day at work, or you’ve exhausted yourself working out at the gym, or doing outdoor work around your house, you may like to make a bag of microwave popcorn, grab a cold beer and relax watching television.  There’s nothing wrong with that…except that your favorite snacks may be contributing to a potential brain toxin that may lead to Alzheimer’s in your later years.  Let me explain.

Can Your Popcorn Give You Alzheimer’s?

Several months ago, CBS News reported about the potential dangers of diacetyl – a food additive that gives many snacks like microwave popcorn and butterscotch candy their buttery flavor.  The chemical diacetyl (butanedione), more commonly known as DA, occurs naturally from the fermentation process so it is also found in beer and wine.  Food manufacturers also synthesize DA and add it to margarine, milk products, artificial coffee flavorings, butter, cookies, crackers, chocolate, cocoa powder, candy, potato chips, corn chips, shortening oils, oil sprays, gelatin desserts, flavoring extracts, syrups and pet food.  It should be noted, however, that both the FDA and food safety organizations of the EU approved the use of diacetyl in many foods. As reported, the dangers to exposure to diacetyl seemed to be in respiratory illnesses that affected workers in food processing plants that used diacetyl.  Breathing in vapors from processing apparently resulted in airway irritation and inflammation resulting in symptoms like coughing and wheezing.  Conditions like bronchiolitis obliterans, and other similar respiratory conditions, had been reported in lawsuits from people working with diacetyl.  Material Data Sheets, or MDS, for product ingredients may not list diacetyl if it is fewer than 3%. Many sources have reported that there is no danger to end-consumer use though – supposedly people who ate products with diacetyl in them. However, in September 2012, a Colorado man was awarded $7 million in damages for having developed what’s now being called “popcorn lung” after eating 2 bags of microwave popcorn daily for 10 years, being exposed to diacetyl.  The report didn’t differentiate whether the man’s condition developed from inhaling the fumes while microwaving the popcorn, or from eating it. Then a research study published in Chemical Research in Toxicology, reported that scientists at the University of Minnesota in Minneapolis revealed some other potentially troubling news about diacetyl.  Apparently, the researchers found that DA (diacetyl) has structural properties similar to a substance that is known to create beta-amyloid proteins in the human brain. These proteins can clump together and build up into plaques that cover the brain and become the hallmark sign of Alzheimer’s disease.  Researchers wanted to learn if DA also could clump these proteins together. The results of their study showed that, yes, DA also led to beta-amyloid clumping resulting in toxic effects to nerve cells grown in their laboratory.  DA was found to easily penetrate the blood-brain barrier which is a layer of cells that are supposed to prevent harmful substances crossing from the blood into the tissues of the brain.  DA was also found to cancel the protective effects of glyoxylase-1 a protein that protects nerve cells of the brain from becoming damaged. In March 2013, Newsmax online news, reported that diacetyl was still in microwave popcorn, yet “there is disagreement over whether ordinary consumers who pop a bag or two a week are at risk”. In April 2013, The U.S. Department of Labor’s OSHA (Occupational Safety and Health Administration) cited the Natural Flavors Company in Newark, New Jersey for 12 workplace violations for worker overexposure to diacetyl.

Should You Stop Eating Diacetyl-Containing Foods?

I’m not a fan of food additives period. I know that some food additives may or may not be toxic.  From the reports noted above, it seems to me that there’s reasonable doubt that diacetyl could pose a problem to both your lung and your brain health.  Even though research findings of diacetyl’s effect on nerve cells have not yet been duplicated in actual brain tissue of people, only in lab dishes, the researchers themselves are wary about the possible long-term neurotoxic effects of DA. The fact that it has been shown to be able to cross the blood-brain barrier, makes me concerned about the safety of your future brain health if you continuously consume foods that contain diacetyl. I would caution my readers, as I would my patients, to stay away from any foods known to contain diacetyl such as those mentioned above.  You may want to forego eating microwave popcorn altogether and buy an inexpensive air popper to make your own.  It’s not only cheaper than microwave popcorn but you know there are no added potentially risky chemicals in them.  As for beer, wine and other fermented foods naturally containing diacetyl, limiting alcohol usage for this reason, would be wise as well. Stay Well, Mark Rosenberg, M.D.