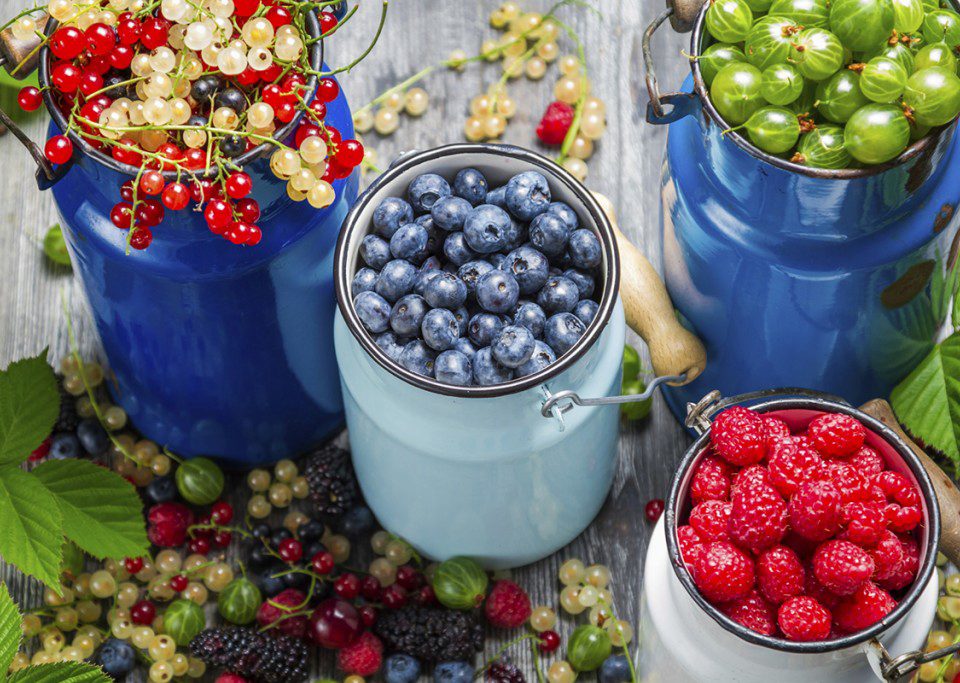 I just love berries! Not only are they sweet and delicious, but they are loaded with healthful antioxidants, vitamin A, vitamin C and fiber. Soon we’ll be heading into prime berry season. Strawberries are already here, and June marks the prime time for blueberries, raspberries and boysenberries, and other berries. There are scores of recipes and serving ideas for them. But there is another berry that’s available starting now in late spring that’s a little different and a nutritional powerhouse — Indian gooseberries, also known as amla fruit. The fruit is about the size of blueberries and looks sort of like veined, slightly hairy green grapes. They taste extremely tart, and ripened gooseberries are hard to find.

Since it is difficult to obtain riper gooseberries, the fruit is often used with sugar in dessert recipes. Indian gooseberries are a close relative to currants and should not be confused with Chinese gooseberries (AKA kiwifruit), Barbados gooseberries or star gooseberries. Gooseberries have been used in traditional Indian or Ayurveda medicine for centuries as well as finding their way to England and Western Europe into tasty cobblers, pies, crumbles, smoothies jams and preserves as well as cooked into sauces to accompany rich meats like roast duck and pork. 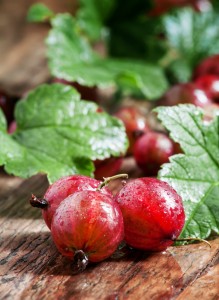 Gooseberries have some amazing properties that make them extremely valuable to a healthy diet. Like most fruits, they are low in calories and fat and cholesterol-free. Gooseberries are a good source of vitamin C—about 50% of the day’s requirements in one cup serving — vitamin A, manganese and dietary fiber. According to the United States Department of Agriculture’s Nutrient Data Laboratory, canned gooseberries are similar in nutrition to raw gooseberries. Since the raw berries are only available from about May through August, canned or gooseberries are available year round and can be acceptable substitutes. Look for fresh gooseberries in Whole Foods and your local farmers market in season or order fresh-frozen ones online from Northwest Wild Foods in Burlington, WA. and there are a number of varieties. You can also buy red or green gooseberries at Northwest Wild Foods. 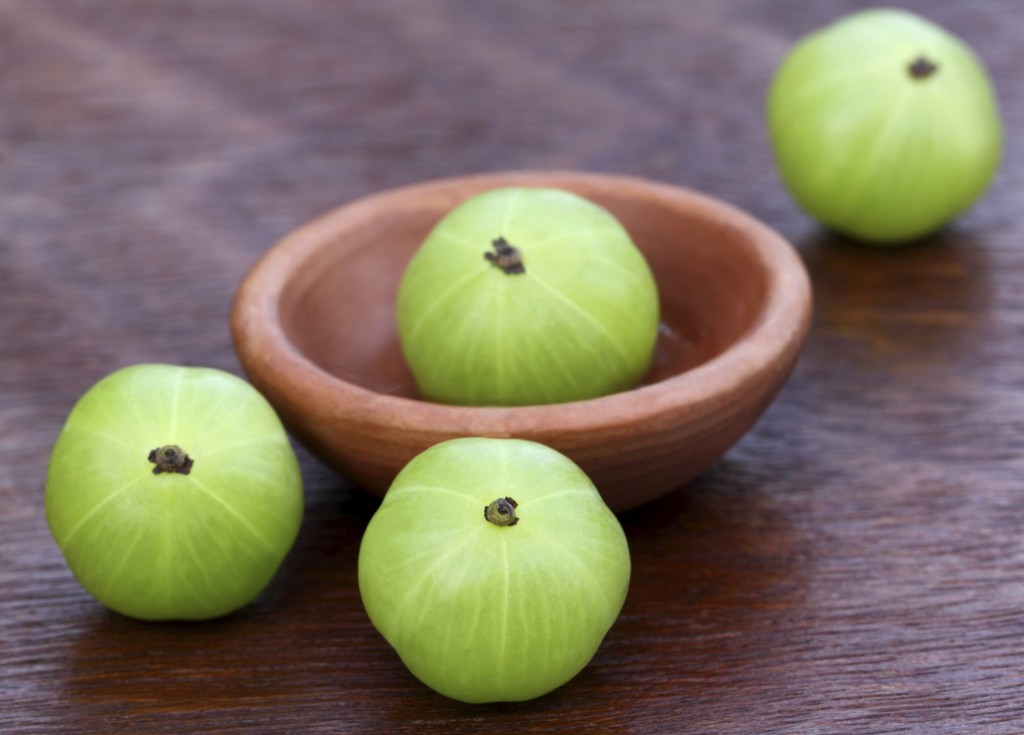 Research shows that gooseberries have properties important for helping to ward off metabolic diseases and to maintain good health. These include anticancer, antioxidant, boosting the immune system, cholesterol balancing, and liver protecting properties. Gooseberries are especially useful for reducing cholesterol, fighting the development of plaque in the arteries and preventing oxidative stress on cells. By decreasing cholesterol, gooseberries can contribute to lowering plaque buildup in the arteries. A 2008 study found that people who consumed dried gooseberry extract showed a decrease in LDL cholesterol after six months and an increase in HDL (“good”) cholesterol. There has been research indicating that they may slow the growth of cancerous tumors as a result of the antioxidants in gooseberries that play a role in protecting cells from the damage.  As if these weren’t enough reasons to add Indian gooseberries to your diet, there have been indications that gooseberries are beneficial for people with diabetes and diabetic complications. A study published in 2012 stated that gooseberries had positive effects on fasting glucose levels.  A 2011 study found that taking gooseberry extract and green tea decreased measures of diabetes while improving oxidative status, which is the degree to which there is cumulative damage to the body by free radicals, which can occur in people diagnosed with diabetes.

Gooseberries pair well with other berries such as raspberries or strawberries. Since early gooseberries are quite tart, they work best in recipes where they are first cooked in sugar as you would fresh cranberries. Here’s an easy recipe that teams Indian gooseberries with other power foods such as rolled oats, ground flax seed, cinnamon, walnuts and Greek yogurt. The sweet-tart of the gooseberries goes beautifully with crunchy nuttiness of the crisp while the Greek yogurt provides a creamy counterpoint. This is great for dessert or brunch. 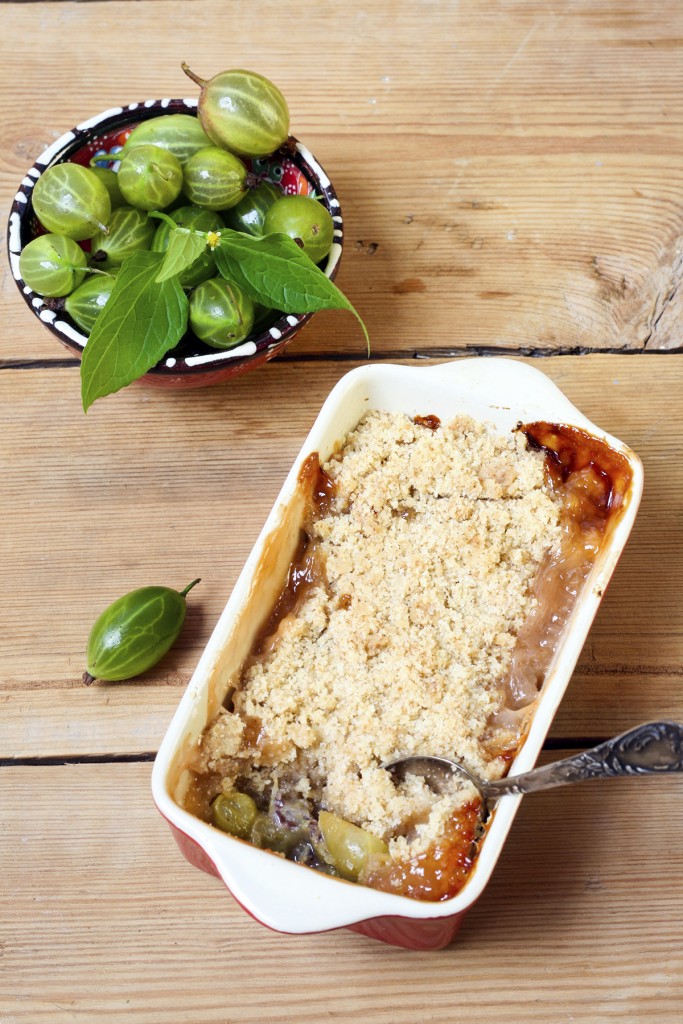