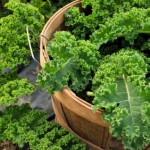 I like to frequently use an ancient Socrates quote to my patients when I try to drive home the importance of eating the right foods to both preserve and heal their health.  The saying, roughly, goes, “Let your food be your medicine” and with these 2 nutritional powerhouses, that I’m going to tell you about here, old Socrates couldn’t be closer to the truth.  These 2 simple foods are quinoa – an ancient supergrain – and the beautiful kale plant.  They not only taste great but I’m going to tell you how they can actually save your life.

I’m always baffled when I see this highly nutritious food being used as a garnish on restaurant entrees.  Kale’s deep green-blue- purple color adds a colorful backdrop/bed for your rice or other vegetables, yet it’s often the most nutritious item on the entire plate!  The truth is, Americans eating out in restaurants rarely eat the kale garnish humbly adorning the other food on their plate and it gets thrown out as garbage!

Similarly, it’s deep, majestic blend of colors inspires gardeners to use kale as focal point in fall planters.  But guess who’s getting the nutritional benefit out of it? Squirrels and rabbits!  It’s true – animals eat more kale out of gardens than humans do at their dinner table! They must know something most Americans don’t and researchers are just waking up to.

Kale hasn’t been studied as much as broccoli or cabbage, but lately food biologists have come to put kale under the microscope a lot more.  They’ve found out some pretty impressive health-boosting qualities of this inexpensive, easy to cook common garnish including:

1.  Fights Inflammation and DNA Damage.  First, kale belongs to the cruciferous family of vegetables, like broccoli or cauliflower.  It’s been shown in research to contain over 45 different disease-fighting flavonoids including kaempferol and quercetin.  These 2 natural food-based “medicines” fight tissue and DNA damaging inflammation and oxidation throughout your body.  Inflammation has been proven to lead to disease and DNA damage makes you age faster, more profoundly.  Both set you up for the bad diseases of aging like cancer and heart disease.  Kale also contains good amounts of carotenoids which protect against cataracts, pulmonary disease and hardening of arteries.

3.  Heart Healthy.  Steamed kale has been shown to bind to bile acids during the digestive phase and move them out of the colon. The result is lowered “bad” LDL cholesterol levels and healthier coronary arteries.

Now let’s also look at quinoa – the ancient supergrain that the Incans revered as “gold”.

Quinoa has been around for over 4,000 centuries that we know of.  It was first used as a food by the ancient Inca Indians who discovered that golden quinoa seeds cooked could actually be used as human food.  The Incan warriors ate it before going into battle, claiming it boosted their stamina.  And, it’s true; quinoa has some major nutritive, energy and health-boosting assets:

1.  High protein – contains all the essential 9 amino acids and is especially high in lysine, beneficial for tissue repair and growth.  Lysine is crucial for older people to get enough of to help prevent weakening of muscles, ligaments and tendons.

2.  High fiber – contains more than twice the amount of fiber of other grains. Like kale, eating a serving of cooked quinoa a day can help remove toxins from your colon, relieve constipation, and help lower bad LDL cholesterol levels. Built up toxins and high LDL cholesterol, result in diseases like cancer and heart disease that start showing up in older years.

3.  Iron and B vitamin booster – older Americans need iron in balanced, lower amounts, than younger people and quinoa contains good levels of it.  It can also help to supplement mostly vegan diets that may be iron deficient. It contains B2 that helps boost energy.

So, the next time you’re in the produce section of your supermarket, take a whole new look at that big leafy bunch of kale sitting there as it can offer you some incredible disease and  anti-aging benefits.  Then, take a walk down to the grains aisle and pick up a box, or bag, of quinoa.  Cook them both for dinner and combine their multiple health benefits into a meal fit for an Incan warrior!