Oregano Is a Spice for All Seasons 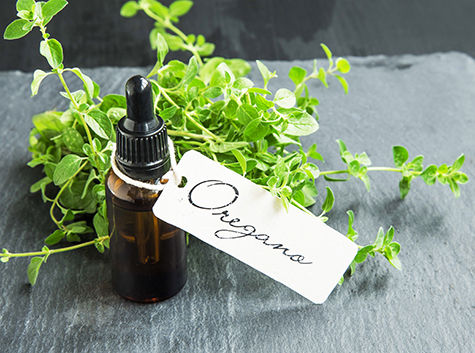 Oregano is a common spice you likely have in your kitchen for seasoning savory Italian or
Mediterranean recipes. The oregano plant is native to warm climates in southwestern Europe and the Mediterranean and currently Greece, Israel and Turkey are main producers of both the spice and essential oregano oils.

Oregano is closely related to other spices like mint, thyme, marjoram, basil, sage, and lavender and goes well with these flavors in food. This common spice is used in the culinary setting for a variety of savory baked goods, vegetables, pizza and pasta sauces, and protein like chicken and fish. Like most herbs, oregano also has some medicinal properties and the essential oil extracted by steam distillation may have antimicrobial activity, studied as a food preservative.

Ancient Greek and Roman empires used oregano medicinally as an antiseptic for skin sores. It was also used for stomach troubles and respiratory disease like the flu, croup or even the common cold. Of course, there are considerations for safety so read on for a 360 view of oregano.

Nutritionally, using oregano in the kitchen is a good thing: 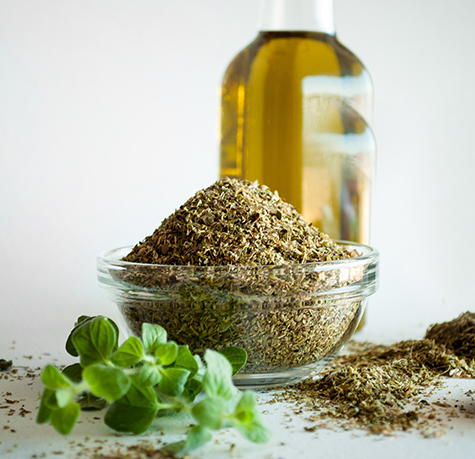 Try adding oregano to spice up bread or dinner rolls, as a seasoning for grilled meat or tofu, or in dressings and marinades including pesto. Using fragrant herbs is one tactic to add flavor as you cut down on sodium in the diet.

Using oregano medicinally is different than using it in the kitchen; doses are often more concentrated and safety considerations change. The properties that contribute to oregano’s medicinal benefits include tannins which are potent plant compounds heightened in concentrated sources or extraction. Oregano tannins may in fact interfere with the absorption of minerals in the diet such as iron and zinc.

Some of the possible health benefits of oregano include: 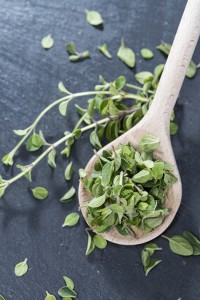 Both the leaf and oil of oregano have Generally Recognized as Safe (GRAS) status in the U.S. meaning that they are safe to use in culinary form. Safety starts to waver when oregano is used topically or orally in medicinal amounts. Concentrated forms can be irritating to the skin.

Like other herbs, oregano may interact with medications or supplements when used in concentrated medicinal forms. Oregano used medicinally has a mild blood thinning and blood sugar lowering effect so there are moderate interactions with drugs or supplements that are anticoagulants or used to treat diabetes or high blood sugars.

Other dietary supplements commonly used to treat elevated blood sugars include alpha-lipoic acid, bitter melon, chromium, devil’s claw, fenugreek, garlic, guar gum, horse chestnut, Panax and Siberian ginseng, psyllium, and many others so be sure to discuss with your pharmacist or treating physician before adding in a product like oregano.

Whether you use oregano in a sauce or seasoning this summer or experiment with using it as a marinade for grill favorites, the opportunities are many. Given the versatility of oregano will you incorporate it this summer?

NOTE: Want to taste a delicious recipe using oregano? Try Grace O’s Mushroom Medley, which delivers all of the incredible benefits of mushrooms, too.