These 4 Common Fruits Can Keep Your Bones Strong

You may already be including these fruits in your diet because you like them.  But if not, you’ll want to be sure to eat more of them because, as you’ll see, they are particularly good at maintaining bone health.  Here they are… 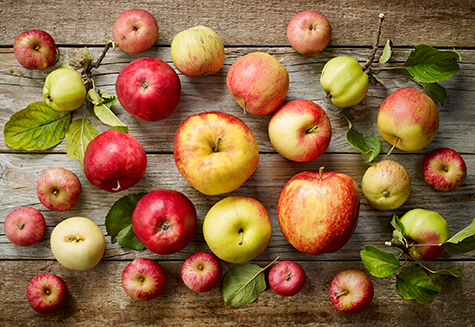 1.  Apples.  Yes, the humble little apple that, now that it’s fall, is pretty plentiful.  You’ve probably heard or read about antioxidants and how important they are to your overall health.  They fight free radicals from damaging your DNA and making you more susceptible to the bad diseases of aging like heart disease, Alzheimer’s, diabetes and even cancer.  Apples, like many fruits, contain a certain type of antioxidant called flavonoids.  Yet, the apple contains an abundance of the particular flavonoid – phloridzin – that is very beneficial to your bones.

Phloridzin increases bone density and helps fight inflammation that can weaken bones.  French researchers recently discovered that postmenopausal women who ate more apples had better bone density than those who didn’t.  Now, many people peel apples and throw them away – but the peel is where the highest concentration of phloridzin and other beneficial polyphenols are.  So, wash your apples well before eating, or you can use a vinegar and water mix to remove any pesticides and dirt, from the peel before you eat it.  Apple varieties with the highest amounts of phloridzin and other polyphenols are Rome Beauty, Cortland, Golden and Red Delicious, Fuji. 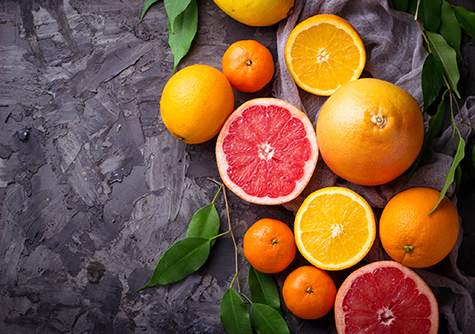 2.  Grapefruit.  Over the years, we’ve all heard that grapefruits are good for weight loss, but bone health? Yes, it’s true.  Grapefruit, the pink and red varieties, contain lycopene which is an antioxidant that stimulates the production of osteoblasts – immature bone cells that then form into stronger adult bone cells.  Studies have shown that people, who consumed more lycopene through their diet, or supplements, had much less urinary levels of a bone-damaging protein NTx.  Lycopene, luckily, is a nutrient that is easily absorbed by your body, but cooking, or heating, its food source increases the release of lycopene more easily.  You may want to try broiling your red or pink grapefruit with a little cinnamon before eating. 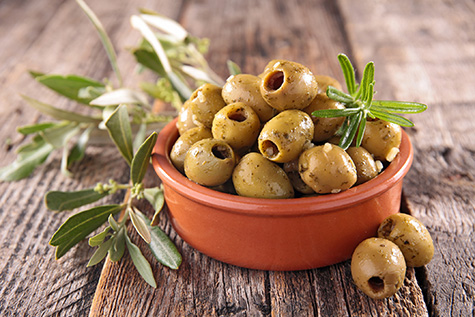 3.  Green Olives.  Spanish researchers found in a 2012 study that older Mediterranean men had far lower levels of osteoporosis.  They wondered if it had to do with the amount of olive oil that they consumed in their diet.  They found that, yes; these men had much higher levels of osteocalcin – a bone health marker – circulating in their blood. Yet, as good as the oil is, the source of the oil – green olives – seems to be the real key to bone health.  Most people think of olives as vegetables, but they are actually a fruit from the amazing Olea europea tree that lives for centuries.

Green olives are the raw state of olives, which later oxidize through curing and turn black. They can also stay green, depending on the level of maturity at which they’re picked.  Olives contain high amounts of an antioxidant that is exclusive to them alone – hydroxytyrosol.  This substance has been recognized as a potent cancer prevention nutrient. Recent lab studies have shown that it also has bone loss prevention properties as well.  It helps with the deposit of calcium into bones and decreased loss of total bone mass.  Olives also contain oleuropein another powerful antioxidant that helps fight inflammation that can weaken bones. Green olives make tasty additions to salads or just eaten as a snack. 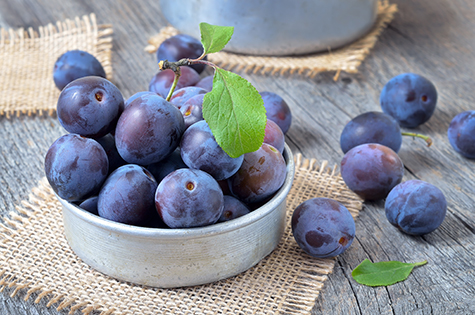 4.  Plums/Prunes. Some people are unaware that prunes are just dried plums.  Whichever form of them you eat, they are one of Nature’s bone builders.  In a 2011 study published in the British Journal of Nutrition, researchers revealed that postmenopausal women who ate more dried plums (prunes) had higher BMD (bone mineral density) levels than those who didn’t eat the fruit.  The increased densities were more notable in the ulna – the long bone of the wrist particularly prone to fracture in older women – and in the spine, also prone to compression fractures as you age.  They had much less decreased serum markers of specific bone-turnover/destruction markers.  Personally, I like to eat plums in their natural state, but prunes are great too, as long as they’re not covered in sugar.  Two medium size dark purple “black” plums, or a serving of prunes, a day can help your bones stay strong and your colon healthy too.

There’s an old saying I’m sure you’ve heard, ‘An apple a day keeps the doctor away’.   Now we should add to that, an apple, olive, plum and grapefruit a day.  I’ve been recommending to my patients that they consume at least 1 serving of each of these fruits at least 5 times a week.  After reading the surprising bone building and preserving properties of these amazing fruits, I hope you’ll do the same to keep your bones strong and at less risk for fracture.