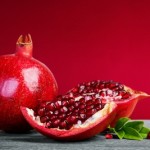 An abundance of clinical data has established pomegranate as a broad-spectrum, multi-modal defense against the leading causes of death in the Western world, from atherosclerosis to cancer and diabetes.

In the last decade alone, more than seven times as many studies have been published validating pomegranate than in all the preceding years combined.

The bulk of this research has focused on the benefits of pomegranate juice and fruit extracts. Now scientists are discovering a novel source of pomegranate’s myriad benefits: the various botanical components of the pomegranate tree, particularly its seeds and flowers.

For example, a 2009 pre-clinical model found that extracts from pomegranate flowers reduced hardening of the arteries by 70%, while juice alone reduced it by only 40% compared to controls. In addition, flower extracts were found to significantly decrease blood lipid and glucose levels.

In this article, you will learn the latest scientific evidence of pomegranate’s life-saving effects, along with new studies exploring various constituents of the plant and their power to combat a host of degenerative diseases through distinct physiological pathways.

The polyphenolic content of pomegranate juice and pulp have historically aroused the greatest scientific interest. In particular, the formidable antioxidant capacity of their ellagitannin content has been credited with much of pomegranate’s health-promoting power.

Polyphenols and other components in pomegranate juice exert beneficial effects that extend beyond the cardiovascular system. Numerous phytochemicals in pomegranate juice—ellagic acid in particular—have been shown to disrupt cancer development at multiple stages. Another polyphenol unique to pomegranate is punicalagin, which converts into molecules known to slow prostate cancer cell growth. These act by inhibiting pro-inflammatory NF-kB, a cytokine implicated in the development of numerous forms of cancer.

Scientists have also focused on pomegranate’s antimicrobial potential. Polyphenols contained in the juice inhibit the growth of a number of pathogenic (disease-causing) bacteria, fungi, and parasites.

The global epidemic of metabolic syndrome and its associated pathologies—obesity, type 2 diabetes, and cardiovascular disease—has lent new urgency to the discovery of anti-diabetic agents with low toxicity suitable for long-term use. New research points to extract of the pomegranate flower as an attractive, safe, low-cost intervention.

Indian researchers have demonstrated the capability of flowers from male pomegranate plants to influence blood sugar in normal and experimentally diabetic rats.

In 2005, researchers in Australia demonstrated that 6 weeks of supplementing obese diabetic rats with pomegranate flower extracts prevented blood sugar increases following a glucose-laden meal—but had no such effect in normal rats.

The same researchers convincingly demonstrated that extracts of pomegranate flower reduce cardiac muscle triglyceridecontent in diabetic rats, simultaneously lowering triglyceride and total cholesterol levels in the blood. Normalization of these vital lipid parameters occurred through upregulated expression of PPAR-alpha, the gene transcription factor that controls how cells take up and utilize fatty acids. These twin findings have profound implications: drug companies have spent millions in the effort to find a pharmaceutical that could induce these effects. As a dual PPAR-alpha and PPAR–gammaactivator, pomegranate flower extract offers potential realization of that effort through a safe, low-cost, natural intervention.

These results were attained via alterations in gene expression, in this case through downregulation of genes that produce the stiffening proteins collagen and fibronectin. Pomegranate flower extract also reduced heart muscle signaling of endothelin-1, a vasoconstrictor (blood vessel-narrowing) peptide implicated in cardiac fibrosis. Additionally, the extract reduced gene expression of the inflammatory regulatory molecule NF-kB, which plays an important role in controlling the inflammation and metabolic alterations associated with obesity.

Inflammation is the target of another newly discovered component of pomegranate flowers—punicanolic acid, a member of the triterpene family of beneficial essential oil molecules. In laboratory studies, punicanolic acid inhibits production of the potent inflammatory mediator TNF-alpha, which is found at increased levels in overweight and obese people and contributes to insulin resistance.

The inflammation observed in obese and overweight people not only adds to insulin resistance. It also underlies the increased risk of cardiovascular disease seen in obese individuals and in animal models of type 2 diabetes. The condition is characterized by substantially elevated blood sugar levels, LDL, very low-density lipoprotein (VLDL), triglycerides, and oxidized fats. At the same time, beneficial HDL and cellular antioxidant systems are found to be depressed in such individuals.

Oral administration of pomegranate flower extract reversed all of these conditions in a laboratory rat model of type 2 diabetes, highlighting its potential utility for aging individuals at risk for diabetes and its cardiovascular complications. The extract also helps ameliorate fatty liver disease, the most common cause of liver function abnormalities in people with obesity and type 2 diabetes.

Pomegranate flower extract is a potent inhibitor of the digestive enzyme alpha-glucosidase. Alpha-glucosidase breaks complex carbohydrates into their simple sugar components for absorption into the blood. Inhibiting its action slows the rate at which free sugar is absorbed into the bloodstream.

The practical effect of this beneficial action was apparent in an animal model: in diabetic rats fed a carbohydrate-rich meal, oral administration of the flower extract markedly lowered plasma glucose levels during the postprandial (after-meal) period. This is a vitally important finding, because postprandial blood sugar elevations contribute greatly to the tissue damage caused by high glucose levels (glycation). Postprandial sugar spikes are also responsible for excessive insulin release that can cause a subsequent drop in glucose levels, triggering inappropriate hunger and further eating.

Additional multi-targeted effects of pomegranate flower extract are emerging rapidly: phenolic compounds from the flowers exhibit numerous anti-atherosclerotic effects even in non-diabetic animal models, reducing the size and number of atherosclerotic plaques by up to 70%.

The data on pomegranate seed oil’s cancer fighting potential is most compelling in tissues of the male and female reproductive systems. Pomegranate seed oil is a potent inhibitor of aromatase, the enzyme that produces estrogen from testosterone, and 17-beta-hydroxysteroid dehydrogenase type 1, which is responsible for the conversion of estrone to potent estradiol. This enzymatic blockade contributes to pomegranate seed oil’s ability to inhibit growth of estrogen-dependent breast cancer cells in culture. It also reduces the cancer cells’ invasiveness (ability to cross barriers). A separate mechanism is also clearly at work here, because the oil also increases cellular suicide (apoptosis) even in cancer cells that lack estrogen receptors.

Cancer cells need to grow new blood vessels to support their rapid growth and tissue invasion (angiogenesis). They typically do this by ramping up production of a variety of growth factors, including vascular endothelial growth factor (VEGF) andinflammatory interleukins.

Pomegranate seed oil powerfully inhibits production of VEGF while upregulating production of migratory inhibitory factor (MIF) in breast cancer cells. In a laboratory model of vessel growth, these modulations translated into a significant decrease in new blood vessel formation. Pomegranate seed oil’s capacity to block breast cancer development was also demonstrated in an organ culture model of mouse breast cancer. Treating the glands with the oil prior to exposure to a powerful carcinogen resulted in an astonishing 87% reduction in the number of cancerous lesions compared with controls—substantially greater protection than has been previously reported for derivatives of pomegranate juice.

As with flower extracts, pomegranate seed oil contains a number of unique chemical constituents with potent biological effects. Punicic acid is an omega-5 polyunsaturated fatty acid that inhibits both estrogen-dependent and estrogen-independent breast cancer cell proliferation in lab cultures. Punicic acid also induced apoptosis at rates up to 91% higher than those in untreated cell cultures—effects which appear to be related to fundamental regulation of cancer cell signaling pathways.

Another common malignancy that often depends on sex hormones for its growth is prostate cancer, a leading cause of cancer-related mortality in American men, accounting for more than 29,000 deaths each year. Because of its slow rate of growth and appearance later in life, prostate cancer has been identified as an ideal target for nutritional chemoprevention.

Pomegranate seed oil sharply inhibits proliferation of a number of human prostate cancer lines through changes in the cell growth cycle and also by inducing apoptosis (cell death). At the same time, it has been shown to powerfully suppress cancer cell invasion. Pomegranate oil also acts in synergy with other pomegranate components, suppressing prostate cancer proliferation and metastatic potential more effectively than each component individually.

An abundance of data supports the power of pomegranate extract as a broad-spectrum, multi-modal defense against multiple diseases of aging. It has been shown to inhibit pro-inflammatory nuclear factor-kappaB (NF-kB), downregulate production of certain cancer-stimulating androgens, and upregulate expression for the paraoxonase molecular complex associated with artery-cleansing HDL.

The most recent research suggests that the various botanical components of the fruit tree may be required to obtain pomegranate’s full protective benefit, in particular its flowers and seeds.

Extracts from pomegranate flower have been shown to suppress signaling of endothelin-1, a blood vessel-narrowing peptide implicated in cardiac fibrosis (abnormal thickening of the heart valves) and to help arrest the onset of metabolic syndrome as well as its associated pathologies of obesity, type 2 diabetes, and heart disease.

There is now solid published data to support the value of supplementing with pomegranate fruit extract, along withpomegranate flower and seed oil extracts.