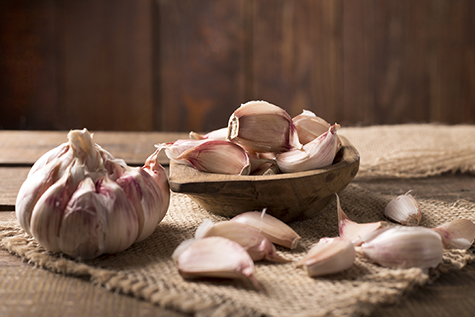 Findings published on August 29, 2017 in the journal Scientific Reports support the ability of garlic to combat undesirable bacteria.

Professor Michael Givskov of the University of Copenhagen and colleagues found that ajoene from garlic interferes with communication systems in the bacteria Staphylococcus aureusand Pseudomonas aeruginosa byinhibiting small regulatory RNA molecules. The sulfur-rich compound also inflicted damage on the bacteria’s protective biofilm, rendering it more susceptible to attack. “The two types of bacteria we have studied are very important,” noted first author Tim Holm Jakobsen of the University of Copenhagen’s Department of Immunology and Microbiology. “They are called Staphylococcus aureus and Pseudomonas aeruginosa. They actually belong to two very different bacteria families and are normally fought using different methods. But the garlic compound is able to fight both at once and therefore may prove an effective drug when used together with antibiotics.”

In 2012, Professor Givskov’s team patented the use of ajoene to fight bacterial infections, and the use of the patent was licensed to a company whose product NX-AS-401 has obtained orphan drug designation to evaluate in people with cystic fibrosis. “We really believe this method can lead to treatment of patients who otherwise have poor prospects, because chronic infections like cystic fibrosis can be very robust,” Dr Jackobson predicted. “But now we, together with a private company, have enough knowledge to further develop the garlic drug and test it on patients.”

“Our findings show that small regulatory RNAs across bacterial species potentially may qualify as targets of antivirulence therapy and that ajoene could be a lead structure in search of broad-spectrum compounds transcending the Gram negative-positive borderline,” the authors conclude.