What You Can Do To Stop Food Insecurity 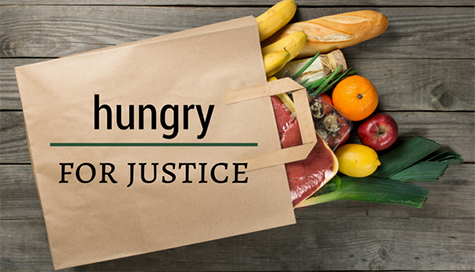 On an especially cold morning last winter, Nancy arrived for her minimum-wage job as a mail clerk for a large company in downtown Nashville, Tennessee. As she was hanging up her threadbare jacket in the break room, trying to thaw out from a night spent shivering under a thin blanket in her chilly apartment, she overheard some coworkers talking about a breakfast meeting they had just returned from. “Why is there always so much food at those things?” one woman complained. “I’m so full I could burst,” laughed another, as she dropped a tray of leftover bagels onto the counter.

Nancy recalls thinking that she would have happily traded places with either of these women; she couldn’t remember a time in her life when she felt completely full of food. Her dinner the night before had been half of a peanut-butter sandwich, she hadn’t eaten breakfast that morning, and for her lunch, she had packed only an apple, which she would eat with the bagel she snatched off the tray after the women left the room. (“I actually took two bagels,” she admits sheepishly. “It was probably wrong of me, but I figured I could save the second one for dinner.”)

It’s one of the most appalling and difficult-to-understand social injustices in the world today: Food is necessary to sustain life, yet some people are stuffed, gorging on three full meals per day and mindlessly munching on snacks in between, while others are starved, not knowing where their next meal is coming from, or the one after that.

And, as an ad campaign by the Greater Chicago Food Depository illustrated, “food shouldn’t feel like a luxury.” Eating should be the right of all human beings and not something reserved only for those with enough resources. 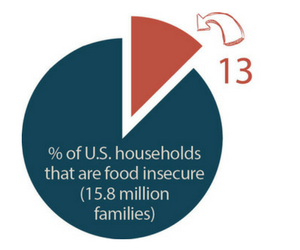 “Most Americans are not aware that the U.S. is affected by a food crisis,” says Cat Cora, acclaimed chef, television star and founder of Chefs for Humanity, a nonprofit that helps to provide immediate and reliable access to food and water in the United States and worldwide. “We equate hunger with third-world countries or distant foreign lands that don’t affect our day-to-day life.”

“Hunger impacts one in seven [people] nationwide,” U.S. Rep. Alma Adams, D-N.C., said in 2015 when introducing a resolution aimed at highlighting the issue of hunger in her district and across the country. “The issue of food insecurity is a serious problem that has been ignored far too long by too many policymakers in Washington.”

According to a USDA report published in 2016, nearly 13 percent of U.S. households (15.8 million families) are food insecure, meaning it’s difficult for them to access adequate food because of a lack of money and other resources. A lack of healthy and nutritious food, in turn, leads to preventable health issues like diabetes, anemia and a weakened immune system, which then leads to the need for good health care, something these families also cannot afford. Chronic hunger also decreases mental focus, which translates to poor learning experiences for hungry children in the classroom; without essential nutrients, young brains cannot properly develop, harming learning abilities over the long term.

But while poverty is a major barrier to food access, it isn’t the sole reason why so many people are going hungry. The Food and Agriculture Organization of the United Nations reports that although 1 billion of the world’s 7 billion people in the world suffer from hunger (also referred to as undernutrition), Earth actually has the capacity to successfully feed 10 billion people—the world’s projected population by the year 2050. The problem isn’t supply; it’s a two-fold issue of access and waste. 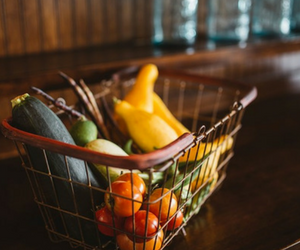 According to the USDA, more than 23 million people in the United States live in a food desert—a census tract, normally a low-income one, where at least 500 people or 33 percent of the tract’s population reside more than one mile from a supermarket or large grocery store that offers affordable, healthy, fresh food options. Many of the residents of these neighborhoods also lack reliable transportation to get to a large store; faced with the option of not eating at all, they often turn to convenience stores, small corner markets and fast-food restaurants and end up paying higher prices for less-healthy options like fatty and salty processed foods.

Fortunately, the issue is not going entirely unnoticed. Take, for example, Brahm Ahmadi. Soon after Ahmadi moved to West Oakland after college in 2002 to do community organizing work, he realized something very important—the area was a food desert. So he took action, partnering with other entrepreneurs to found People’s Grocery, a nonprofit with a mission to “improve the health and local economy of West Oakland” through programs like The Mobile Market, a van that brings affordable, fresh groceries into underserved neighborhoods. Then, in 2010, the organization introduced the concept of a food market, café and social hall in the same neighborhood; after years of setbacks and hurdles, People’s Community Market is scheduled to open in 2018.

“The purpose of this project is to give the people of West Oakland the chance to have dignity, respect and equality through something that most communities take for granted: a grocery store,” Ahmadi says. “Our goal is to build community in West Oakland, enhance the health and quality of life of local families and empower them with knowledge about food and health.”

Fifty million Americans are food insecure, yet an estimated 40 percent of all food produced in the United States is wasted, according to Food Shift, a California-based nonprofit with a bold mission to reduce waste and increase access to nutritious food.

“Food waste is destructive to the environment and to the health of our communities,” says Dana Frasz, who launched Food Shift in 2012.

Food Shift recently opened The Food Shift Kitchen near San Francisco; Frasz describes it as an innovative social enterprise that uses cosmetically imperfect produce to create nourishing meals for the community, while also providing on-the-job culinary training to individuals with barriers to employment.

“We believe that by trimming waste and diverting food loss, we can not only fight hunger, but also create jobs, combat climate change, conserve natural resources and cultivate more sustainable communities,” Frasz adds. 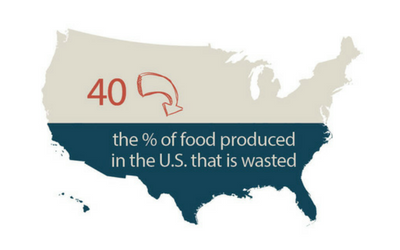