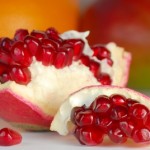 Pomegranates are the epitome of a super food — for no small reason.

In fact, these bright red fruits are one of the richest sources of antioxidants known.

They’ve been shown to protect against a variety of diseases including heart disease, diabetes, and atherosclerosis.

But the benefits of pomegranate don’t stop there. In fact, pomegranate juice may slow prostate cancer growth, according to research from UCLA.

Let’s take a look at the research.

In the study, investigators from UCLA recruited men with a prior history of prostate cancer. They had undergone cancer surgery or radiation, but their PSA levels (a prostate tumor marker) were quickly rising. They were given 8 ounces of pomegranate juice daily for several years.

What they found was striking: The men who drank the juice had slower rising PSA levels. Specifically, it took 54 months for their PSA levels to double rather than the average 15 months prior to drinking pomegranate juice.

This wasn’t the only human study to find positive results. A more recent one conducted in 2012 showed that pomegranate extract reduced PSA increases as well.

The goal of prostate cancer therapy is to keep PSA levels as low as possible. And slower increases are a positive sign. But just what is it about pomegranate that makes it so beneficial? Laboratory studies may offer clues.

The best way to attack cancer is through a multi-targeted approach. Cancerous cells work through different mechanisms to grow and spread.

That’s why it’s important to tackle different mechanisms simultaneously for the best results — an approach which is rarely utilized by conventional medicine.

This is also why pomegranate looks so promising — it attacks prostate cancer in a variety of ways:

The primary benefits of pomegranate are attributed to their ellagitannin content, which are phytochemicals with powerful antioxidant properties. Other powerful compounds they contain include caffeic acid and luteolin.

The goal of prostate cancer therapy is to keep PSA levels as low as possible, as rising values can indicate recurrence. To keep levels from increasing, doctors often prescribe therapies such as hormone deprivation, which can produce undesirable side effects.

Regardless, significant strides in prostate cancer research have been made within the last few decades. The five-year survival rates have increased remarkably since the 1970s, though it still remains a top killer.

That’s why it’s important that men take a multi-modal approach in treating their disease.

The results of the UCLA study are truly remarkable and show promise for men with this condition. Although the pomegranate juice wasn’t “a cure” per se, it significantly delayed PSA values without any dangerous side effects to speak of.

Not bad at all for a fruit, wouldn’t you say?