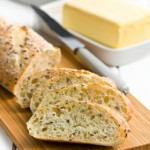 Chromium is a mineral whose name derives from the Greek word chroma, meaning colored, referring to the red compounds the mineral is found in.

The intense red color that defines rubies is, in fact, due to their chromium content.

While the dangers of hexavalent chromium became widely known with the film Erin Brockovich, the version found in food (trivalent chromium) is safe and healthy.

Trace amounts of chromium are helpful in maintaining normal blood sugar levels in diabetics and people who have hypoglycemia.

Chromium’s effect on glucose might be a reason for its ability to extend life.

In a cross-over study, diabetics and nondiabetics who received 400 micrograms of chromium daily experienced a decrease in fasting sugar, post-meal glucose, and insulin levels.

In a different study, diabetics given a daily combination of 600 micrograms of chromium plus two milligrams of biotin had lower levels of glucose and hemoglobin A1c (a measure of long-term glucose control) in comparison with those who received a placebo.

Chromium appears to lower glucose levels by enhancing insulin’s action rather than stimulating insulin secretion. This could be the factor behind chromium’s ability to reduce carbohydrate cravings.

How to Get More Chromium

Chromium is abundant in brewer’s yeast, which can be mixed into drinks or sprinkled onto food. It’s also found in a number of multivitamin formulas.

Chromium is available in different forms including chromium polynicotinate, chromium picolinate, and as “GTF” (glucose tolerance factor), a combination of trivalent chromium and amino acids. (GTF chromium was identified as a compound in yeast and other foods that reversed glucose intolerance in rats.)

Should You Supplement With Chromium?

While overt chromium deficiencies are rare, subclinical deficiency is believed to exist in most Americans. The current Recommended Dietary Allowance (RDA) is 35 micrograms (mcg) per day for men and 25 mcg for women aged 19 to 50 years. (After the age of 50, the recommendation drops by 10 mcg.)

The RDA was calculated by levels obtainable in the diet, but it is well below what many would consider optimal.

According to Nicholas V. Perricone, MD, chromium is best taken away from milk and from foods high in phosphorus or phytic acid, which is found in unleavened bread, raw beans, nuts, seeds, grains, and soy isolates.