6 Restaurant Chains Are Getting Rid of Artificial Ingredients 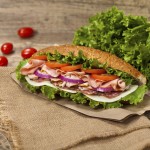 The public is becoming more and more savvy (and knowledgeable) when it comes to what they are eating. The documentaries about healthy, natural food and the research done on pesticides and preservatives have changed the way we view what we eat.

The large chain restaurants, such as McDonalds, have experienced a significant drop in sales since the beginning of the year. McDonalds has plans to lure customers back into their stores by tidying up their menus, closing weak stores, and bumping up the minimum wage salary for employees. Some of the other chains are taking a healthier approach by removing artificial ingredients from their menus.

Subway recently announced plans to remove all artificial colors, flavors and preservatives from their menu over the next 18 months. Everything from salads to cookies will be affected by the new standards. The company says the process is more difficult for the chain than many other quick service restaurants, due to the chain’s size and breadth of ingredients. To kick off the process, Subway is introducing a new roast beef recipe, roasted with garlic and pepper, which the company describes as the latest example of menu improvement at the chain.

Noodles & Company plans to remove all artificial colors, flavors and preservatives from its soups, sauces and dressings by the end of the third quarter this year. The chain is also testing naturally raised, antibiotic-free chicken in some restaurants in Colorado, and is working with suppliers to make the switch system-wide over this year and next. The chain already uses antibiotic-free, vegetarian-fed pork.

Chipotle has long had the reputation of leading the pack in terms of fresh, sustainable food, so it’s not surprising that the chain’s plan to go back to the basics in terms of food emerged in a slightly different form. In April, the company became the first national chain to cook entirely with non-GMO ingredients. Chipotle’s next target: artificial preservatives, which the company still uses in their burritos.

Panera Bread recently released a “No No List” that details exactly what ingredients are being left off of their menu now and which ones will be in the future.

It’s not surprising that more and more chains are coming around to natural menus. It’s the only way they can all keep up and compete with each other. This change in healthy eating is a win for all of us really and gives us hope for a complete overhaul towards the way we think about our food.