The Anti-Aging Revolution is Focus of New Book 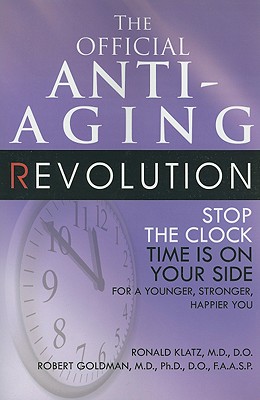 When it comes to anti-aging medicine, The Official Anti-Aging Revolution by Ronald Klatz, M.D. and Robert Goldman, Ph.D. may be one of the most complete books on the subject to date. The book covers all areas of anti-aging medicine from theories on aging to hormone therapy, through lifestyle choices (exercise, sleep, stress, skin-care) and even into biotech-human enhancements.

Their book is packed with information, but because FoodTrients is focused on nutrition and aging, we will concentrate on the chapters about nutrition and diet. In Chapter 10, which deals, with Vitamins, Co-Vitamins, and Cofactors, doctors Klatz and Goldman explain their stance on vitamin supplements. “For best results, each of us should, first and foremost, make an effort to consume a daily diet that is as high in fresh, unprocessed fruits and vegetables as possible. Then, we can get extra boosts of nutrients that might benefit our bodies, by supplementing with high-quality, natural dietary supplements, the selection of which should be matched to our individual health needs by a qualified anti-aging physician.”

They describe vitamins, co-vitamins (like alpha lipoic acid and coenzyme Q10), minerals, and amino acids (such as acetyl L-carnitine and lysine) in detail in several chapters, discussing the role of each in anti-aging protocols. The doctors also describe symptoms of specific vitamin/mineral/amino-acid deficiencies and recommend dosages for each along with side effects.

In the book, the doctors outline additional beneficial anti-aging nutrients like flax oil, aloe, cayenne, garlic, ginger, green tea, hops, jujube, apple cider vinegar, soy isoflavones, resveratrol, and so much more. The authors say that the capsaicin in cayenne peppers has many anti-aging effects: “When taken orally, cayenne stimulates circulation, aids digestion, and promotes sweating . . . There is also evidence to suggest that cayenne may be useful in the treatment of obesity.” Hops, used most commonly to flavor beer, gets attention from the authors because, they say, “Its mild sedative properties result in it being a common ingredient in herbal sleeping remedies. It is also used to soothe the stomach and aid digestion.” Jujubes, a Chinese fruit, get a shout-out for the healing properties found in their seeds. Apple cider vinegar is lauded because “it creates an internal pH environment that microbes cannot tolerate.” The authors explain that the acetic acid and butyric acid in the vinegar promote the growth of friendly bifidobacteria. They go on to say that, “The vinegar has both antiseptic and antibiotic properties, and can be helpful in treating sore throat, cuts, wounds, digestive problems, and gum infections.”

“The Long-Life Diet” is the focus of a later chapter. The doctors open with a discussion on the dangers of obesity and how it undercuts longevity. They did find hope for people who are making an effort to lose weight. “In a study of 6,000 obese and overweight people aged thirty-five and older who were followed for nine years, Dr. Edward Gregg of the Centers for Disease Control and Prevention (Georgia) found a 24 percent lower death rate in overweight/obese men and women who lost weight intentionally than in people whose weight remained steady during the course of the study.” Doctors Klatz and Goldman summarize their thoughts on eating a proper diet with this: “No matter the amount of research that scientists do into anti-aging medicine, no matter how skilled physicians become in using these tools, if people will not turn their own attention to changing their diets for the better, there can be no completely successful cases in the realm of longevity medicine. It’s just that important.”

The Official Anti-Aging Revolution is published by Basic Health Publications.