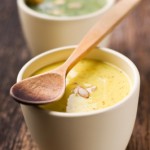 An international coalition of researchers has proved in the laboratory that a comprehensive ‘cocktail’ of nutritional supplements significantly increased youthful life span.

Since aging is a multifactorial process with overlapping causes, scientists formulated a 30-ingredient nutrient mixture with overlapping benefits designed to halt or slow the major causes of aging.

The nutrient mixture, developed by a team of life scientists led by Dr. C. David Rollo of McMaster University in Canada, targets five key mechanisms of aging. Researchers postulated that by slowing or reversing these five universal processes, they could slow or reverse the major factors of aging.

While this research was initially conducted on animals, every one of the 30 nutrients is already in human use as a supplement. All have established records of safety and effectiveness at promoting health and preventing specific disease processes. Many of the nutrients are already known to improve cognition, enhance mobility, slow aging, or extend life spans. Others have clear-cut beneficial effects on one or more of five key aging mechanisms, adding value to the combination as a whole.

The implications that this nutrient cocktail has on human longevity are profound.

Let’s look now at these five fundamental causes of aging to understand the multiple ways that this nutrient mixture attacks them.

Dr. Rollo’s researchers recognized that, while aging is a complex phenomenon, most of its manifestations could be traced to a relatively small number of basic processes. Among these, there are five that account for most of the tissue, organ, and system dysfunction that produces chronic disease and untimely death. These five are well known to Life Extension® members: oxidative stress, inflammation, mitochondrial dysfunction, insulin resistance, and integrity of membranes.

No single mechanism alone accounts for any one specific disease process. Instead, all five mechanisms interact with one another to produce both general aging and specific conditions that limit activity, cognitive function, and ultimately life span.

The scientists recognized that these specific mechanisms accounted for the vast majority of age-related, longevity-impairing conditions. In this way, the researchers cast a wide net to encompass as many disease states of aging as they could. Additionally, they chose laboratory mice to study the impact of the nutrients on aging because of the animals’ short normal life span. This would help the researchers learn the most in the least amount of time. A mouse is considered ‘old’ by age 2 years, providing a convenient and realistic setting for the study of age-related conditions. A human study might have taken decades before they could draw meaningful conclusions.

Next, the researchers needed to establish markers of progressive aging. They wanted to know not only how long the animals lived, but also how well they functioned as they grew older. Most importantly, they needed measures that were equally applicable to both mice and to humans. Based on the work of others, Rollo’s group decided that those criteria could be met by measuring how much the aging animals moved, and how their cognitive function changed with time.

All animals, from worms to insects to humans, change in very similar fashions as they succumb to the five key mechanisms of aging. In particular, changes in mobility and cognition provide reliable ways to measure the impact of aging on an individual’s function.

As they grow older, all animal species move about less and less each day, spending more and more time at rest or in sleep. Reduced mobility is an excellent marker of aging, because it is closely linked to overall metabolic rate, feeding, fat storage, brain neurotransmitter levels, mitochondrial function, and cardiovascular and skeletal muscle systems. And loss of mobility in humans is associated with muscle wasting, bone thinning, and other changes that increase the risk of other negative outcomes such as fractures, pneumonia, and skin infections.

Cognitive function also declines with age in all animal populations. Younger animals typically learn faster, requiring fewer repetitions to master a task. They can also bring up important memories faster and more accurately, allowing them to find food, escape threats, and protect other members of their species. Studies show that preserving cognitive function into older ages is associated with longer life spans.

Thus, by choosing to examine the animals’ mobility and cognitive function, in addition to their longevity, Dr. Rollo’s research group was able to measure how their mice were aging in ways that are likely to be applicable to humans as well.

Let’s see how the mice did.

After devising their 30-ingredient nutrient cocktail based on the five key mechanisms of aging, Dr. Rollo’s group soaked the mixture into small pieces of bagel, which they then fed to the mice; control mice were fed only the bagel bits without the supplement.

First, they determined the effect of the supplement on longevity. They used both normal mice and a special strain that demonstrates accelerated aging as a result of excessive sensitivity to all five aging mechanisms. Compared with control animals, the supplemented mice of the accelerated aging strain lived 28% longer. Supplemented normal mice survived 11% longer than their controls.

Rollo’s researchers then turned their attention to the animals’ mobility as one measure of their general function with aging. They placed the mice in a system of transparent chambers, where they were given food, water, and an exercise wheel. Then they recorded the amount of time each animal spent moving about the enclosure over a 24-hour period.

Normal, unsupplemented mice showed a progressive decline in activity; by 24 months their mobility was roughly half that of younger normal animals. By 24 months of age, supplemented normal mice were moving roughly three hours more per day than were unsupplemented animals. No other treatment has ever been found that ameliorates declining mobility to this extent.

Rollo’s group also measured biochemical markers that might explain the differences in mobility between supplemented and unsupplemented animals. Supplemented older mice had:

Taken together, the results of this study provided compelling evidence that the multi-nutrient mixture could slow down and perhaps even stop many age-related changes that contribute to the dangerous loss of mobility so common in older individuals.

Rollo’s next study investigated the effects of the nutrient mixture on the cognitive decline that also threatens both quantity and quality of life as we age. Just as in the previous study, the researchers provided the nutrient mixture soaked onto bagel pieces, giving control animals plain bagels. Next, they tested the mice on a ‘water maze’ that required the animals to find and remember the location of a platform submerged just below the surface of a pool filled with water. This simple exercise, which tested the animals’ learning skills as well as their memory, was repeated each day for five days.

As one might expect, on day 1 all of the mice had trouble finding the platform at first, taking an average of 81 seconds. By day 5, young mice had learned and remembered enough to find the platform 43% faster than on day 1. Older unsupplemented mice, however, showed no significant improvement in the time it took them to find the platform, indicating age-related impairments in learning and memory.

But with supplementation, old mice showed a level of learning almost identical to that of young mice; in fact on day 5 they took an average of 46% less time to find the platform than they did on day 1. In other words, supplemented old mice showed the same ability to learn and remember new tasks as did young animals.

As with their previous study, Rollo’s researchers also sought biochemical and structural explanations for the observed improvements in the supplemented animals’ behavior. They found that:

Together, Rollo’s findings present a remarkable picture of our emerging ability to control not one, but five of the key pathways to an aging body and mind. In their papers, the researchers freely admit that they don’t yet have precise knowledge of exactly how each nutrient is working in their experimental model. But they recognize the great importance of addressing multiple aging pathways each through multiple mechanisms. 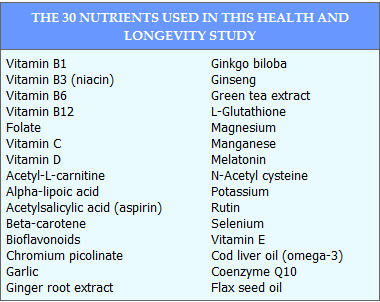 Growing scientific evidence connects most of the chronic diseases, and even longevity itself, with five key mechanisms of aging.

By devising a supplement formula comprised of multiple nutrients that attack these five mechanisms through multiple pathways, international researchers have significantly lengthened the life span of experimental animals. Just as importantly, the nutrient mixture markedly enhances animals’ overall mobility and cognition, restoring function in those areas to youthful levels.

The marked benefits demonstrated in response to this 30-ingredient nutrient cocktail help explain why studies with single-agent compounds do not always produce meaningful longevity-enhancing results.

All of the individual nutrients in the mixture are known to be safe and effective in humans, though time will tell if the specific combination of all thirty will prove as effective in humans as it has in mice. The preponderance of the evidence, however, suggests it may live up to expectations.