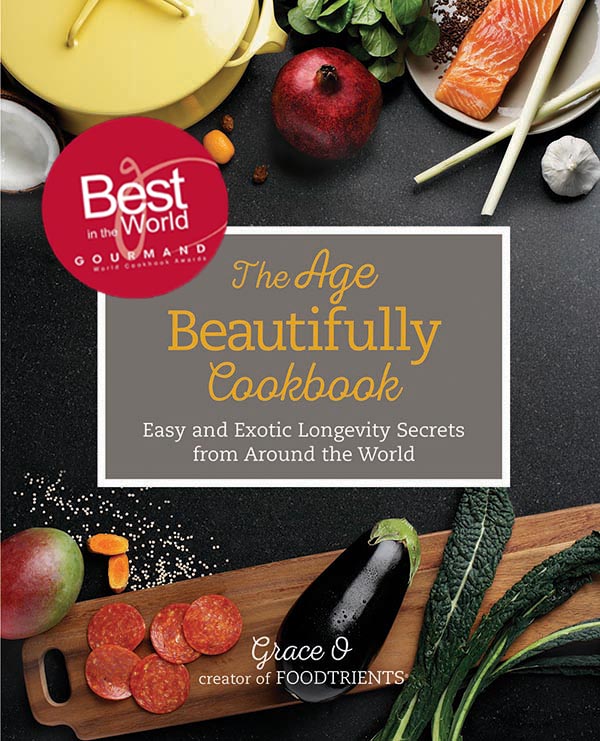 The Gourmand International Cookbook Awards have been called the “Oscars” of the food world, and we are pleased to announce that Grace O’s The Age Beautifully Cookbook: Easy and Exotic Longevity Secrets from Around the World earlier this year won the National Award in the INNOVATIVE category for this year’s competition and now has been awarded, “The Best in the World” by Gourmand World Cookbook Awards 2017!

The Age Beautifully Cookbook was also awarded Gold in the Specialty Cookbook category of the Living Now Book Awards presented in September, 2016, and is available in both hardcover and eBook on Amazon, Barnes & Noble and other bookseller sites.

Inspired by the Olympic Games and their global spirit, the Gourmand World Cookbook Awards were founded in 1995 by Edouard Cointreau. Every year, they honor the best food and wine books, printed or digital, as well as food television. Last year, books from 211 countries competed in this prestigious awards competition, which is free, and open to all languages.

Each year, Gourmand gives the awards in a very special location for gastronomy attended by hundreds of publishers, authors, chefs and journalists who take part in the event. In past years, the awards ceremony has been located around the world in cities including Paris, London, Barcelona, Kuala Lumpur, Frankfurt, and Grythytan, Sweden. This year, the Gourmand Awards Ceremony was held in Yantai, China on May 27 & 28.

With the huge network created around the Gourmand Awards, Mr. Cointreau decided to launch the Paris Cookbook Fair in 2010, which is now the World Cookbook Fair, which takes place at the annual Frankfurt Book Fair.

People don’t have a choice when it comes to aging, but they can choose HOW they will age – the foods they eat, exercise, and healthy habits can have dramatically positive effects on aging. That’s why Grace O created FoodTrients®, a website and cookbooks dedicated to great-tasting recipes that also deliver age-defying benefits.

Eating well doesn’t mean sacrificing the foods people love or satisfying meals. The Age Beautifully Cookbook provides one hundred-plus, easy-to-make recipes that promote health and well-being. The recipes are built on foundations of modern scientific research and ancient knowledge of medicinal herbs and natural ingredients from around the world. And consumers won’t believe how good they taste, too!

Since the publication of her first anti-aging cookbook, Grace O has identified eight categories of FoodTrients that are essential to age-defying and healthier living – Anti-inflammatory, Antioxidant, Disease Prevention, Immune Booster, Mind, Beauty, Strength, and Weight Loss. Specifically designed logos represent each category and are indicated with every recipe along with summaries of the recipe’s healthful properties.  These benefits show how specific foods, herbs, and spices in the recipes help keep skin looking younger, prevent the diseases of aging, and increase energy and vitality. By incorporating these properties in an everyday diet, people are more likely to look and feel younger, have more energy, and improve their mood and mind.

The cookbook also includes Grace O’s Feel-Good Formula for Longevity, Beauty and Wellness, and lists of the top age-fighting fruits, vegetables, grains, spices, and proteins. Plus, a guide to age-defying FoodTrients and their benefits, a list of ingredient resources, and menus for entertaining.

Who knew that the right foods in sufficient amounts could do so much good for your body? Now there is the science to prove it.