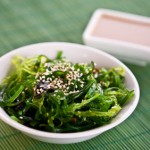 Increasingly, my patients have become more and more interested in trying to improve their health using natural foods and supplements.  Lately, several of them have asked me about seaweed – the centuries old staple of Chinese, Korean and Japanese cultures revered for its many health benefits.  As I tell my patients, seaweed – a sea vegetable – has many outstanding nutritional benefits that are worth taking advantage of.  Here’s what you should know about seaweed.

If you’ve ever eaten sushi – a traditional Japanese food – you may know that the edible wrapper that surrounds the fish, called nori, is made from dried seaweed. Their slightly salty taste also makes nori good snacks in place of potato chips.  Or, if you’ve ever eaten miso soup – another traditional Japanese food – you’ve eaten ground-dried seaweed along with the soy it contains.  A traditional Japanese dessert – agar-agar – a kind of cross between jello and lemon meringue pie – also contains seaweed.  All of these foods have a high vitamin and mineral content which Asian people eat daily and to which they attest their good health and longevity.

In fact, the Japanese people credit miso soup with the survival of an entire group of people hospitalized after the nuclear bombing of Hiroshima at the end of WWII.  Not surprising, as seaweed contains alginic acid which is able to bind with dangerous heavy metals (mercury, lead, barium, cadmium, and radioactive strontium) to make them indigestible and remove them from your body through elimination.

Other forms of seaweed-based “sea vegetables” that you can find at health food markets that carry organic vegetables, or Asian supermarkets, include:

Sea vegetables are usually sold in their dried form and can be reconstituted by placing in water.  You can also crumble and use in salads or other vegetables.  Powdered seaweed can also be taken as a supplement as well which is available in health food stores and more comprehensive vitamin outlets.

The Many Health Benefits of Seaweed

As I mentioned earlier, seaweed has long been used in Asian medicine, particularly Traditional Chinese Medicine, or TCM, which categorizes seaweed as having a salty and cold temperament.  Formulas containing seaweed are used to treat conditions like upper respiratory congestion, and dissolving nodules and cysts.  It is also thought beneficial in:

As I recommend to my patients, seaweed is a nutritional superfood that has many health-boosting properties.  In Okinawa, Japan, there is a mountain town called Longevity Island that has the lowest rates of diabetes, heart disease, cancer and stroke in the world. Obesity is not an issue there. In fact, 40,000 Japanese people are over age 100! The Japanese attribute their good health and longevity, at least partially, to a diet rich in seaweed and its amazing health benefits.

As a doctor who promotes preventative measures in maintaining health, I feel that seaweed can play an important part in keeping you healthy well into your old age.