The FoodTrients team attended the Natural Products Expo West at the Anaheim Convention Center held March 7-10. We found a mountain of interesting new, all-natural and organic products that will be hitting store shelves in the months to come.

The show is one of the biggest gatherings of the top existing brands and newcomers in the natural and organic product category. Over 62,000 people from the industry and the media attended the four-day event. We discovered even more FoodTrients-filled foods than ever – from the exotic to re-created classics. It’s clear that today’s shopper is savvier than ever and looking for great-tasting foods that are safer, healthier and labeled with transparency.  “No GMOs” was a battle cry for many of the vendors who exhibited there.

What follows are just a few of the highlights of the great-tasting, good-for-you foods we found. 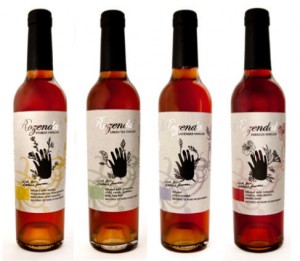 A company from South Africa called Rozendal (rozendalvinegar.co.za/home) is making botanical vinegars that are mellow and infused with teas and herbs. They start with Merlot and Cabernet grapes, add herbs like rosehip, elderflower, and lavender, and then ferment the vinegars in small barrels for 12 years. The flavors are astonishingly good. We’ll be developing recipes around some of them, like the Green Tea Vinegar and the Hibiscus Vinegar. 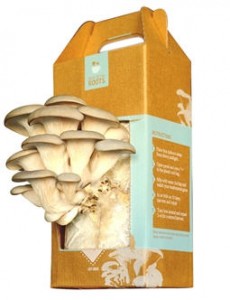 The ‘grow-your-own” food trend was well represented with companies offering products like Micro Greens kits , MushroomGardens, and the Fresh Life Spouter (sprout growers). There was even a Do-It-Yourself Pickling Kit that will be hitting stores soon.

We came across many artisan food companies which were demonstrating original and delicious products we hadn’t seen before. Sosu Artisan Sauces out San Francisco had outstanding artisanal ketchup, sriracha sauce, and Thai ketchup. Al Dente Artisanal Pasta had a new line of fettuccine made with ground chia seeds. The pasta wasn’t gritty like some whole-grain pastas can be. One of the chia pastas was also flavored with spinach.

New and unusual drinks were plentiful. Reed’s, the company that makes tangy ginger brews has perfected komucha—a fermented beverage full of probiotics. Kombuchas can have a very vinegary taste and uneven texture. Reed’s has a Cabernet Grape Kombucha that drinks almost like a wine. The Cranberry Ginger flavor is also mellow and very pleasant to drink. We  tasted a new, experimental line of Mangosteen Super Fruit Juice Drinks from Amy & Brian. Fresh mangosteen is hard to come by, but quite tasty and good for you. These drinks, also flavored with goji berries, passionfruit, or pomegranate, deliver on mangosteen flavor and nutritional benefits.

Products made from grass-fed cows turned up on quite a few aisles. Teton Waters Ranch raises cattle on grassy pastures in Idaho without growth hormones or antibiotics. The resulting steaks, ground beef, and hot dogs are high in omega-3 fatty acids and low in saturated fats. Organic Valley showed off its Grassmilk, non-homegenized whole milk, 2% milk, and fat-free milk. Rumiano Family Organic Cheese had a whole line of organic, certified non-GMO cheeses made with grass-fed-cow’s milk, including mozzarella, sharp cheddar, pepper jack, and colby. 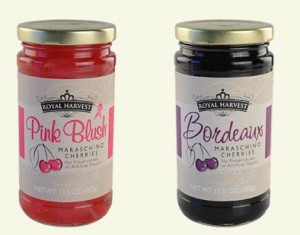 Finally, we found some sweet treats that were exciting. Everywhere we turned there was frozen yogurt and ice “cream” made with coconut milk instead of cream. Much of it was wonderful. We were thrilled to see that the Oregon Cherry Growers had developed an all-natural maraschino cherry line called Royal Harvest. They had a dark Bordeaux flavor and the yellow Rainiers in jars. From Armenia came Harvest Song with its whole, green, walnuts preserved in sugar syrup and its Tea-Rose-Petal Preserves. Over in Arizona, the Almond Brothers had gotten their hands on a German copper kettle roaster and were duplicating with perfection the addictive, hard-glazed nuts sold on the streets in Europe. One bite will take you back to Paris or Munich or Luxembourg City in a heartbeat.