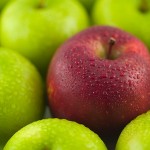 Researchers at the University of Iowa have found a positive effect for ursolic acid, found in apple peel, on preventing weight gain in mice. The findings were reported online on June 20, 2012 in the journal PLoS ONE.

Associate professor of internal medicine Christopher Adams, MD, PhD and his colleagues fed mice a high fat diet and gave half of the animals ursolic acid for six weeks. Although the mice that received ursolic acid consumed more food than those that did not receive the compound, they gained less weight by the end of the treatment period. They also had greater skeletal muscle mass, grip strength, exercise capacity and brown fat as well as improved glucose tolerance and less liver fat.

“From previous work, we knew that ursolic acid increases muscle mass and strength in healthy mice, which is important because it might suggest a potential therapy for muscle wasting,” Dr Adams stated. “In this study, we tested ursolic acid in mice on a high-fat diet–a mouse model of obesity and metabolic syndrome. Once again, ursolic acid increased skeletal muscle. Interestingly, it also reduced obesity, pre-diabetes and fatty liver disease.”

“Since muscle is very good at burning calories, the increased muscle in ursolic acid-treated mice may be sufficient to explain how ursolic acid reduces obesity,” he added. “However, we were surprised to find that ursolic acid also increased brown fat, a fantastic calorie burner. This increase in brown fat may also help protect against obesity.”