By FoodTrients
What’s That Smell? Has Your Food Gone Rancid? 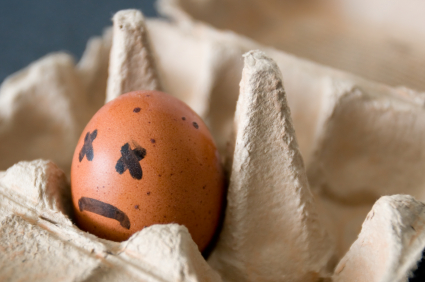 Does your cupboard hold a package of unfinished crackers? An old bag of whole grain flour? Some leftover nuts from holiday baking? Or perhaps a bottle of vegetable oil you’ve been slow to finish?

If so, you may be harboring dangerous, rancid foods.

Protecting against rancidity — which occurs when oils oxidize — has long been a challenge for home cooks, but a recent perfect stew of factors has made the issue more serious. Strangely enough, this situation comes courtesy of the rising popularity of “healthy” polyunsaturated fats, whole grain flours and warehouse stores — not bad developments on their own, but taken together they’ve resulted in American pantries full of food that goes rancid much faster than we’re used to.

Add to that Americans’ growing acclimation to the taste of rancid foods, and the problem gets bigger.

“There are at least two,” says lipid specialist and University of Massachusetts professor Eric Decker. “One is that they lose their vitamins, but they also can develop potentially toxic compounds” that have been linked to advanced aging, neurological disorders, heart disease and cancer.

The growing problem comes as a byproduct of Americans and food manufacturers swapping trans fats for polyunsaturates in their products over the past 10 years. This has resulted in a whopping 58 percent drop in trans fatty acid consumption in the U.S. in the past decade, according to a recent government report. But for all of their artery-blocking evil, trans fats had at least one big benefit: They were very stable, meaning they took forever to go rancid. The same is true of highly refined white flours.

But when these flours and fats were replaced with whole grain flours and polyunsaturates, such as corn and soybean oil, that shelf stability collapsed.

“Manufacturers noticed this and had to change their delivery schedules and formulations,” says Kantha Shelke a food scientist and spokeswoman for the Institute of Food Technologists. “And some consumers became irrationally angry that their food was not lasting as long as it had before.”

“People buy these huge containers of oil (at warehouse clubs) and just don’t realize that there’s no way they can use it before it goes rancid,” Decker says. “They don’t recognize it as a problem.”

While monounsaturates (like olive or peanut oil) also can go rancid after about a year, they are still 10 times more stable than polyunsaturates, according to Decker.

“People need to minimize their use (of polyunsaturated oils),” Weil says. “And if you do use them, keep them in the refrigerator in the dark, and buy only small amounts that you use up quickly.”

And while some consumers can sniff out (and toss out) rancid foods, many don’t know the telltale stale, grassy, paintlike odor. Others may not be able to detect them through layers of other flavorings. And still others might feel compelled to consume them out of thriftiness or hopes that a strong sauce will mask the taste.

Because air, light and heat speed up oxidation, it’s normally a bad idea to, for example, buy vegetable oil in a clear bottle and place it on the counter in a warm kitchen for several months.

Exotic oils (macadamia, walnut, sesame, fish, flaxseed, etc.), nuts and whole grain flours are also major candidates for fast rancidity, and should all be stored in the refrigerator or freezer. Whole intact grains and nuts in their shells, however, last much longer.

“When grains are ground, their interiors are exposed to the air,” says food scientist and author Harold McGee. “The whole grains contain the germ and the bran, both of which are rich in oils, that are especially prone to oxidizing and going rancid. So you end up with off flavors very quickly in whole grain flours compared to refined flours.”

Frequent shopping for small quantities of fresh and freshly processed foods has served much of the world well in avoiding rancid food. Americans, however, favor a different grocery-shopping pattern that involves less-frequent trips for larger quantities of shelf-stable foods.

Trans fats, preservatives and refined flours combined to train a couple of generations of Americans that “chips, cakes, cookies and crackers could last for months,” Shelke notes, “and we became accustomed to that.”

Those habits may change in time, but until they do, Weil suggests that consumers train their “noses to recognize the smell of rancidity even in parts of a dish.”

Though some hope that our sense of smell and taste can help us avoid rancid foods, recent studies raise doubts. Shelke notes that new immigrants to America often think peanut butter — now often made with polyunsaturates — smells rancid while American natives think it just smells like peanut butter.

McGee notes that the problem extends to rancid olive oils, which, in a 2011 University of California study, were actually preferred by 44 percent of American tasters.

“We assume that rancid flavors are normal,” McGee says, “because, in some cases, that’s what we’ve gotten used to.”

A rancid food is “the smell of oil paint,” says integrative medicine specialist Andrew Weil. “Linseed oil, which is the same as flax oil, is the basis of oil paint. It’s highly unsaturated and so it oxidizes fast when exposed to the air.”

How long is this good?

Although the FDA oversees advice on the safe storage of food at home, it has not updated its recommendations since the gradual switch from saturated fats to unsaturated fats in food production.

Experts advise paying close attention to “use by” and “sell by” dates on packages, which may have changed in recent years because of new formulations.

In general, buy products that contain oils or fats in small quantities.

Store most cooking oils in a cool, dark cabinet — not next to the stove.

Store nuts and whole grain flours in the freezer.

Combining her passion for food and a lifelong commitment to promoting a healthy lifestyle, Grace O has created FoodTrients®, a unique program for optimizing wellness. Grace O is a fusion chef with a mission: to cook up recipes for sustaining a long and joyful life that are built on a foundation of anti-aging science and her work in the health care industry. Mixing foods and unique flavors culled from a lifetime of travels from Asia to Europe and America, Grace O encourages young and old to celebrate a full life that embraces diversity. Lifestyle tips, age-defying recipes, and secrets of the healing properties of food are the centerpiece of FoodTrients™–all available through cookbooks, e-newsletters, and FoodTrients.com. foodtrients.com
What Do FoodTrients Do?