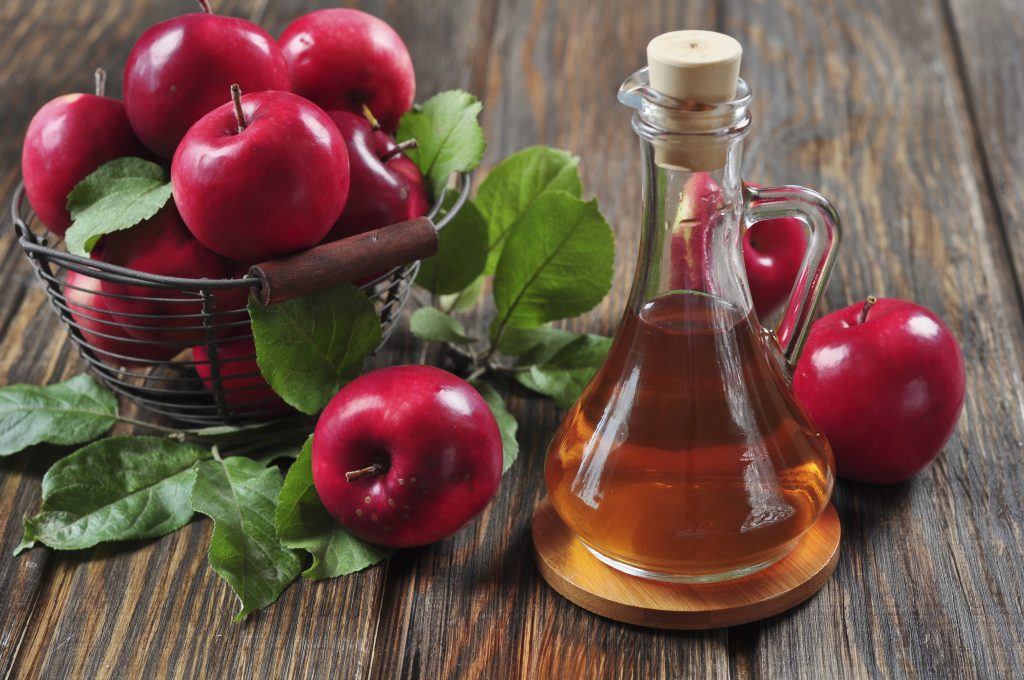 When I attended the Natural Products Expo in Anaheim, CA back in March, I came across a number of exhibitors sampling beverages containing apple cider vinegar. Organic apple cider vinegar is recognized as a healthful ingredient, and it’s amazingly versatile in cooking and as a natural health and beauty aid. I always have a bottle on hand.

Most vinegar starts out as fermented grapes, but it can be made from any number of fruits, even honey. It’s good for you because it is infused with minerals, vitamins and amino acids, plus it helps fight bacteria and aids digestions as well as other healthful properties. The most beneficial vinegar is made from apples.

Hippocrates, the father of modern medicine used vinegar as an antiseptic. Unpasteurized vinegar may contain up to 50 different nutrients, including those from its source, like apples. It’s important to use unpasteurized, un-distilled apple cider vinegar because it still contains the ‘mother’ that is created when acetic acid bacteria and a type of cellulose develop during the fermentation process. It makes the vinegar look cloudy and unappetizing, but believe me, that’s where the good stuff is.  Pasteurizing vinegar kills the microorganisms, but it also kills enzymes and heat-sensitive vitamins. White, distilled vinegar has had the natural, toxin-fighting malic and tartaric acids destroyed. Without these you lose much of vinegar’s ability to inhibit harmful bacteria.

Here are 11 more reasons to make a place in your pantry for apple cider vinegar:

Try my delicious, anti-aging recipe for Chicken Adobo that includes apple cider vinegar. This Philippine adobo is inspired by the original Spanish version. In the Philippines an adobo is meat cooked in a mixture of soy sauce, vinegar, and garlic. I like to top this chicken adobo with onion rings that I’ve dehydrated and dried garlic slices.

1. Place the chicken parts in a large, enamel-covered cast-iron pan with a fitted lid. Add the remaining ingredients except for ¼ cup of the oil.
2. Bring the sauce and the chicken to a boil over high heat. Leave the pan uncovered.
3. Reduce the heat to low and simmer for 30 minutes or until the poultry is cooked through.
4. Once the poultry is cooked, remove the cover from the pan and simmer another 10–15 minutes or until the sauce is thick.
5. Remove from the heat and stir in the remaining oil.
6. Roast the garlic and onions in a 300 degree oven for 20 minutes. Garnish the chicken with the garlic and onions.

GRACE O is the creator of FoodTrients®, a unique program for optimizing wellness and longevity. She is the author of two award-winning cookbooks – The Age Gracefully Cookbook and The Age Beautifully Cookbook, which recently won the National award for Innovation from the Gourmand World Cookbook Awards. She is a fusion chef with a mission to deliver delicious recipes built on a foundation of anti-aging science and her 20 years in the healthcare industry. Visit FoodTrients.com to learn more. Email us at info@foodtrients.com
What Do FoodTrients Do?