Depression: Not A Normal Part of Getting Old 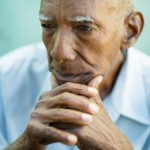 If Grandpa is sleeping more and eating less, if he simply doesn’t enjoy the grandchildren and the golfing as he used to, this is more than a phase of aging. And if Tio Gus is irritable and restless, complaining that life isn’t worth living, it’s not because he is old and cantankerous.

They may be suffering from depression, a mental illness that is often overlooked by family members who dismiss the telltale symptoms as one more indicator that their loved one is growing old.

“Depression is not a consequence of aging,” says Dr. Leonard Gralnick, a psychiatrist and associate professor at Florida International University’s Herbert Wertheim College of Medicine. “But too many people chalk it up to a normal part of the process and that’s a big mistake.”

Depression often expresses itself atypically in seniors, making it more difficult for relatives — and even doctors — to recognize. Even an older man suffering from depression may shrug off what is a potentially dangerous mental illness. “Elderly men are terribly bad at asking for help,” says Dr. Charles Nemeroff, professor and chairman of psychiatry and behavioral sciences at the University of Miami Miller School of Medicine. “In the macho kind of culture we live in, there’s still a stigma.”

But identifying and treating depression in older men is critical because they are disproportionately more likely to die by suicide. Though women develop depression at more than twice the rate, four times as many men as women actually die from suicide .

Yet depression can be effectively treated and experts say about 80 percent of older adults who develop the illness improve with anti-depressant medication, psychotherapy, or a combination of both. Time is of the essence, too. Depression is a risk factor for coronary disease, heart attack and stroke.

“The longer you go without treatment, the harder it is to manage,” Nemeroff adds.

In some cases, treatment actually gets more complicated because some men self-medicate with alcohol or drugs.

Depression is more common in older men who have had recurrent episodes throughout their lives because of a family history of mental illness, but those who have never been clinically depressed can also develop the illness in their later years.

In some cases, this may be due to biological factors.. Diabetes, for example, doubles the risk for depression. And low testosterone — by the age of 70, one in four men will experience low levels of this hormone — can also cause depression, as can certain vitamin deficiencies, vascular disease and thyroid problems.

“For many men a diagnosis of certain illnesses triggers a feeling that this is the beginning of the end,” Nemeroff says.

Men also must cope with different stressors as they age: the loss of job and identity when they retire and the loss of a spouse or other loved ones. In cases such as these, it may be normal to experience temporary sadness, grief and “blue” moods. But major depression is much more than that.

And while older men may complain of physical symptoms — GI problems, pains and headaches — they may not necessarily say anything about overwhelming and persistent feelings of sadness. Studies have shown that more than 70 percent of older suicide victims visited their primary care physician within the month of their death. In many of these cases, the illness went undetected.

Experts say that if you spot any warning signs or changes in behavior, encourage your loved one to schedule a full medical workup. While there are no cures, the illness is something that can be treated.

“We talk of it as an illness that we manage like diabetes or rheumatoid arthritis,” says FIU psychiatrist Gralnick.. “You have it, but you can treat it and go on with your life.”