This Could Lead To Blindness As You Get Older 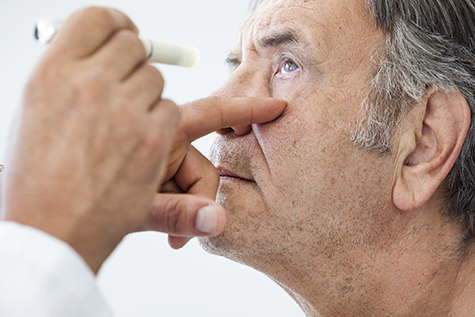 I’ve mentioned several times how getting older can affect your eye health. That’s why I’m interested in keeping your eyes, as well as the rest of you, healthy.  I’ve just learned of new research that sheds some light on a certain risk factor – especially for men – for developing cataracts.  I think you’ll be as surprised as I was to learn what this risk factor is…

Men and Eye Disease:  Your Waistline May be The Culprit

Think about it.  What would your life be like if your vision became so impaired that it stopped you living like you do now? There’d be many things you’d have to give up, or start doing differently.  You may lose the ability to drive and have to be driven everywhere.  You may no longer be able to work. You may even have to start hiring people to do all your household chores like mowing the lawn or all those little fix-it jobs you enjoyed doing.

Vision damage, and its effect on your independence as you get older, can be a frightening prospect.  One that you may not have given much thought to ever happening to you. Yet,  EyeCare America says that about 7 million Americans are clinically, or legally, blind already – about half of them men age 18 through 64 – from common eye diseases like cataracts, AMD (age-related macular damage), or retinal damage.

Cataracts alone steal vision from tens of thousands of people every year.  It is the most common eye surgery performed in America and one of the leading costs for Medicare.  The good news is that you don’t have to be part of these grim statistics.  You can prevent cataracts as you get older if you start taking preventative steps right now.  One important way is to decrease the size of your waistline.   Yes, really…your waistline.

What Your Waist Knows About Your Eye Health

Cataracts are a clouding of the lens of the eye.  This clouding occurs as the result of an oxidation process that accelerates with certain activities as well as just getting older.  This includes too much time in the bright summer sun without good UV ray blocking sunglasses;  exposed to toxins in your environment (chemical fumes, paint sprays, smog, exhaust, factory pollution), and especially if you smoke or are exposed to secondhand smoke. In addition, if you hadn’t been getting enough antioxidants in your diet, through food or supplements, you’d be at even greater risk.

But now, researchers from the Medical Research Council out of the United Kingdom, report another previously overlooked risk factor – especially in men who have double the risk – your waist size.  For men, this would be a waistline 40.2”, or higher.  The risk affects women too – with a waistline of 34.6” or higher.

The UK team found that 7% of men, overweight with large waists, developed type 2 diabetes within 10 years. Women had almost half the risk with 4%, overweight with large waists, developing type 2 diabetes in 10 years.  The development of diabetes puts both men and women, at much higher risk for the development of cataracts – as well as retinal disease (AMD, retinopathy, retinitis) and increased intraocular pressures (glaucoma).

A previous study published in the 2000 Journal of Clinical Nutrition seemed to lay the groundwork for the Medical Research Council’s findings.  Yet, this prior study went a little farther in assessing cataract risk in men.

After 14 years of study, the team found that greater height in men – 6’ or taller – as well as greater waist size, and body fat distribution – were proven independent risk factors for a man to develop cataracts.  They reported that a large WHR (waist to hip ratio) in men is a valid measure of abdominal fat predominance.

This “belly fat” factor was noted in both studies as a strong risk factor for ‘type 2 diabetes and high blood pressure’ – two conditions of metabolic syndrome. Metabolic syndrome, or MetS, has also been research proven to be a predictor of who will develop cataracts.

MetS is a constellation of conditions that includes greater abdominal obesity, high LDL “bad” cholesterol and low HDL “good cholesterol; hypertension, increased inflammation blood markers (C-reactive protein and myeloperoxidase) which can herald risk for eye disease and sudden heart attack.  MetS can result in plaque build up in arteries that restrict blood flow throughout the body – including the eyes. This results in decreased oxygen and antioxidants to the eyes.

In a study out of Sydney, Australia (Investigations of Ophthalmologic Visual Science, January 2013), researchers followed 49 people with MetS for 10 years. After 5 years, the participants had an increased development of the types of cataracts commonly seen in aging.

Additionally, high LDL cholesterol and high glucose levels were associated with an increased 10-year occurrence of the same types of cataracts.  The researchers concluded that MetS would be an accurate predictor of who would likely develop cataracts.

To decrease your risk of vision robbing cataracts, your best bet is to make some life style changes right now by doing the following:

1.  Lose weight.  Even a 5-10% reduction in your current body weight can help your body start to use insulin properly again.

4.  Supplements. A February 2014 study by Harvard Medical School, in the Physician’s Health Study II, concluded that taking a good daily multivitamin can be especially helpful to men.  Men, who took a daily multivamin, and other eye-support vitamins/minerals, had a 13% decreased risk of developing nuclear cataracts and AMD. The most important vitamins included Vitamin C, E, beta carotene (or lutein and zeaxanthin).

If your waist size is in the “vision impairment danger zone”, make an effort to get rid of that health-damaging belly fat sooner than later.  Good vision is just as important to a long, healthy life as your heart or bone health is.  It can allow you to be the guy you want to be – independent and able to take care of yourself and your family.