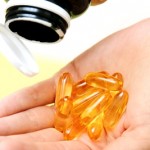 Vegetarians are onto something. Not only do they have lower rates of heart disease and cancer, but they also tend to be slimmer than their

However, there’s something very important that may be missing from their diets; the essential fatty acid commonly known as omega-3. In particular, the omega-3 called DHA that’s found in fish oil.

Below we’ll explore a convenient, meat-free solution for vegetarians looking to get enough DHA.

Sorting Out the Omega-3 Fats

Omega-3s are found in different foods. You’re probably most familiar with the omega-3s found in fish oil, EPA and DHA. Also, the plant-based omega-3, ALA has risen in popularity.

It’s important to note that there is much less information available regarding the health benefits of plant-based omega-3s. That isn’t to say they aren’t beneficial, but we know far more about the benefits of fish-based EPA and DHA. As such, it’s usually preferable to consume animal sources of omega-3 fatty acids.

This presents a challenge for vegetarians. Fortunately, DHA is available from a non-animal source: algae.

Fish actually derive their omega-3s from algae. The difference is that DHA is more concentrated in fish oil versus algae sources. Knowing this information, vegetarians don’t have to run the risk of living with a DHA deficiency.

Vegetarians run the risk of being DHA-deficient. Relying on dairy and eggs alone is insufficient, because they can only supply a small daily amount equal to approximately 20 mg.

This can put them at risk for different health problems, including depression and Alzheimer’s disease.

In contrast, DHA benefits diseases such as hypertension, arthritis, atherosclerosis, and even some cancers.

While it is true that your body can convert ALA (plant-based omega-3) into DHA, the conversion rate is not efficient. According to one study involving men, between 0% and 4% of dietary ALA converts to DHA.

The conversion is slightly better for women, at 9%.

An easy solution would be to take algae derived DHA. Just as little as 200 mg per day has been shown to boost blood levels significantly.

The DHA in algae sources is just as good for you as the DHA found in fish oil. Your body actually can’t tell the difference.

Recent technology has made algae derived DHA more accessible. On top of that, it’s an environmentally friendly alternative to fish oil. Everyone wins!