Is Swimming Best for Lifelong Health? 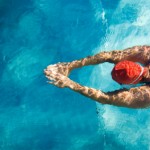 A recent article by Judy Foreman in the Boston Globe examines a report by Steven Blair, a leading exercise scientist from the University of South Carolina, that featured data pointing to the fact that people who swim for exercise may live longer than those who run, walk, or don’t exercise at all.*

The study, which was funded by the National Institutes of Health and the National Swimming Pool Foundation, followed 40,547 men ages 20-90 who completed health exams between 1971 and 2003. Over the course of the research, 1,336 of the 20,356 runners (or 6.6%) had died, while only 11 of the 562 swimmers (1.9%) died. While no specifics could be drawn from the study, the researchers pointed out that swimming may be more beneficial from running because of the full-body nature of the workout, as well as the lack of pounding and wear and tear on the body that many runners suffer.

In a phone interview with the Boston Globe, Blair, while remaining cautious, said that the study does show that “swimmers have lower death rates” than sedentary people.