Skipping A Beat Is No Cause For Alarm. Usually 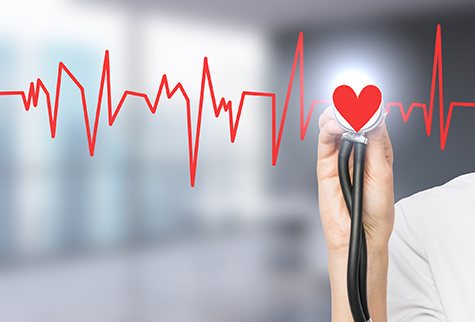 You might feel them as skipped heartbeats or unusually forceful beats. One friend describes her heart palpitations as a soft fluttering that starts in her chest, moves to her neck and sometimes makes her cough. Another says her heart feels as if it’s flipping over in her chest. Mine come in a “pause-thump” pattern that occasionally make me lightheaded.

“Heart palpitations” is a catchall term used to describe anything unusual that people feel in the rhythms of their hearts. And pretty much everyone has them at some point, said Gregory Marcus, a cardiac electrophysiologist at the University of California at San Francisco.

But palpitations vary in what causes them and how serious they are – ranging from benign to a sign of a serious problem. And even though they are exceedingly common, medical knowledge about heart rhythm abnormalities, called arrhythmias, lags behind the understanding of other heart problems such as arterial blockages and congestive heart failure.

That mismatch between experience and awareness extends to the general public.

“There’s a misconception that if something is wrong with the heart, it means someone is going to die or have a heart attack,” Marcus said. “But there are primarily electrical problems that, most of the time, are completely separate from blood flow to the heart.”

Over the course of a day, a person’s heart beats about 100,000 times, and each beat begins with an electrical signal generated in the sinus node in the heart’s upper right chamber. But any heart muscle cell can beat on its own in a petri dish, Marcus said, and any one of those cells can initiate a wayward heartbeat that temporarily interrupts the muscle’s normal beating rhythm.

Depending on where they happen, these extra or early beats are called premature ventricular contractions (PVCs) or premature atrial contractions (PACs). These palpitations can feel like a pause, a big boom or both, as the heart fills with blood while its electrical system resets.

But they don’t feel the same to everybody. Friends have described them to me as hamsters running on wheels inside their chests, birds trying to fly out of their necks or a feeling that their heart is beating backward. Some people become extremely bothered by palpitations that are harmless, while others have serious arrhythmias that they never notice. Marcus has seen patients who report symptoms that don’t show up on an electrocardiogram, or EKG, which records electrical activity in the heart.

PVCs and PACs are so common that, when study participants wear portable, rhythm-tracking devices called Holter monitors, virtually everyone gets at least one premature beat over a 24-hour period, Marcus said. “We always see these early beats,” Marcus said. “It’s part of being human.”

With age, people tend to get more premature beats, added Hugh Calkins, director of the electrophysiology lab at Johns Hopkins Medicine in Baltimore. The great majority of the time, they are not imminently dangerous or life-threatening, especially when they total fewer than 1,000 a day. Even when people get up to 20,000 early beats a day, Calkins said, treatment is warranted only if they coincide with significant symptoms or serious heart disease.

But extra beats can be a sign of a problem. Some research has linked a greater number of PVCs with a higher risk of heart failure and death. In other work, Marcus’s team has found an association between more frequent PACs and a higher risk for developing a type of arrhythmia called atrial fibrillation 10 years later. One research goal, Marcus said, is to figure out whether certain types of PACs and PVCs are riskier than others.

And it’s not just early beats that can cause a weird feeling in your heart. Atrial fibrillation, which is an irregular or rapid heart rate, is one of the most common types of palpitation-causing arrhythmias. About 9 per cent of people older than 65 have AFib, which affects between 2.7 million and 6.1 million people in the United States, according to the Centers for Disease Control and Prevention.

When the heart is not beating efficiently during an AFib episode, blood clots can form, raising the risk of a stroke fivefold, Calkins said. That increased risk becomes concerning when someone also has other risk factors, such as high blood pressure or diabetes.

Other potential causes of palpitations include paroxysmal supraventricular tachycardia, or PSVT, an extra-fast heart rate that can suddenly come and go, as well as genetic conditions such as Long QT syndrome and Wolff-Parkinson-White syndrome. Palpitations can also be set off by heart failure, chronic lung disease, thyroid conditions, smoking, and alcohol and drugs.

Although EKGs can help diagnose the cause of palpitations, doctors can’t always say for sure what causes or triggers them. Still, there are plenty of clues — and myths. Caffeine, for instance, is a stimulant often blamed for early beats — possibly because powerful stimulants such as cocaine and methamphetamine can cause lethal arrhythmias.

But in a 2016 study, Marcus and colleagues collected data from 24-hour Holter monitors on more than 1,300 people and found that coffee, tea and chocolate consumption made no difference in the total number of PACs or PVCs people had.

Chocolate is likely to make a difference only because of its calories, Calkins said: Obesity is a known risk factor for atrial fibrillation, and some studies have found that weight-loss can help prevent it. Alcohol, too, has been linked to a higher risk for AFib, and Marcus is conducting a randomized trial to understand the connection. In other work, endurance athletes have exhibited elevated rates of AFib. In some cases, the first sign of a serious arrhythmia is sudden cardiac death.

Anxiety is another potential cause of palpitations. In the midst of panic or extreme emotions, your heart may beat rapidly because of a release of adrenaline. Anxiety can also make you aware of sensations in your heart that you may not have noticed before, Calkins said. But the hallmark symptom of PSVT is a suddenly racing heart. And doctors often confuse PSVT and anxiety, especially in women.

In one 2017 study, Swedish researchers found that 17 per cent of women with PSVT reported that their doctors attributed their symptoms to anxiety, stress, depression or panic attacks — more than twice the rate of misdiagnosis for men.

“If a woman comes in and says, ‘Doctor, my heart is racing’, a lot of doctors will say, ‘Well, dear, you must be anxious. How is your family life?’” Calkins said. “It still happens.”

The future of arrhythmia research includes a new generation of technologies, Marcus said. So far, only one has been approved by the Food and Drug Administration. Called Kardia, it uses a smartphone or special Apple Watch band to take EKGs that, according to its maker, Alivecor, are as good at diagnosing AFib as a Holter monitor.

Marcus also encourages people to sign up for the Health eHeart study, which is attempting to enroll a million people to better understand and end heart diseases, including arrhythmias.

Whether you own wearable tech or not, doctors suggest seeking help if palpitations interfere with your normal activities; if you also have other cardiovascular problems; if you feel pain, faint or out of breath when you have them; or if palpitations make you pass out. Treatment options include medications and a surgical procedure, catheter ablation, that destroys small areas of heart tissue that are causing rhythm problems.

There is a good chance that palpitations are nothing to worry about, Marcus said, especially if you are younger than 65, with no family history or past experiences of passing out. But if you’re worried, get checked out.

“You don’t want to miss the rare person,” he said, “who would really benefit from seeing someone.”