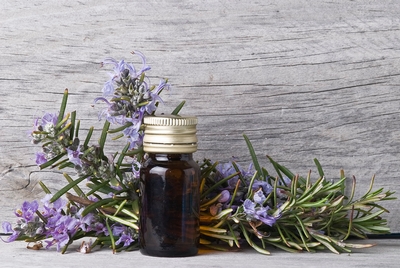 It’s no coincidence that the smell of coffee wakes you up in the morning or that the scent of lavender relaxes you.

And it’s no secret that scents can have a powerful effect on the body, and rosemary is no exception.

According to the results of a study, the scent of rosemary may help to boost your cognitive function.

Captured your attention? Then please keep on reading!

Scientists recruited 20 healthy participants and placed them in an area where rosemary essential oil was being diffused. The volunteers were not aware of the true nature of the study. They were told it was to examine the effect of mood on cognitive function.

They were given different tests to measure their mental speed, accuracy, and mood. A component of rosemary essential oil called 1,8-cineole was measured in their blood.

People with higher blood levels of 1,8-cineole performed better on cognitive tests. Both the speed and accuracy of mental performance improved and an effect was observed on mood.

The active component of rosemary essential oil, 1,8-cineole, is absorbed into the blood through inhalation where it is able to cross the blood-brain-barrier and enter the brain. It inhibits acetylcholinesterase, the enzyme that breaks down the neurotransmitter acetylcholine.

Acetylcholine plays an important role in memory and cognitive function. Certain neurological diseases such as Alzheimer’s are linked to low levels of acetylcholine in the brain. A medication that treats Alzheimer’s called Aricept works by inhibiting acetylcholinesterase.

How does all of this apply to you? For one, you could try diffusing rosemary essential oil at work or at home when faced with a difficult mental task. Students can also try it while studying. After all, there’s no better way to test something than by giving it a shot yourself.

Not into the scent of rosemary? Other herbs contain 1,8-cineole too. They include sage and eucalyptus.

It seems that most of us are looking for some kind of cognitive boost, in some shape or form. With all of our present day demands, a little bit of extra brain power can really go a long way.