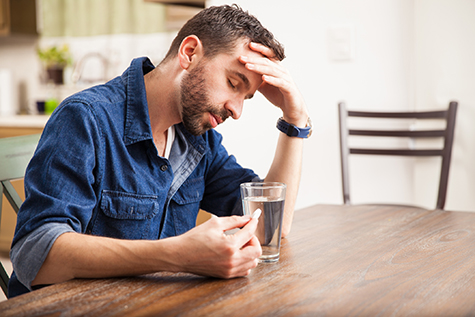 Chronic liver disease appears to be promoted by taking stomach acid blockers known as proton pump inhibitors, according to a study led by University of California San Diego researchers.

The drugs, including such best-sellers as Prilosec, Nexium and Prevacid, change the population of gut microbes. This leads to overgrowth of a bacterium that causes liver inflammation and cell death, the study found.

The study was published in Nature Communications. It was performed with mouse models, healthy human volunteers, and data from chronic alcoholics. Bernd Schnabl, M.D., was the study’s senior author. Cristina Llorente, also of UCSD, was first author.

Proton pump inhibitors are the most effective class of acid reducers, used for such conditions as acid reflux. Unlike antacids such as Tums that neutralize acid, they prevent it from being produced in the first place. And they’re widely prescribed or bought over the counter. An estimated 10 percent of the general population takes them.

However, a series of studies has found evidence of potential harm from these drugs. Most of these studies examine correlations, so they don’t establish cause and effect. They do suggest that proton pump inhibitors should only be taken when there’s a good medical reason.

Long-term use of proton pump inhibitors is associated with a higher death rate, according to a study released in July. Another correlational study published in 2015 found that who take the drugs have a higher rate of heart attacks.

Other health concerns linked to use of proton pump inhibitors are vitamin B12 deficiency, reduced effect of chemotherapy for cancer, and increased risk of chronic kidney disease.

Changes in the gut’s microbial population, or “microbiome,” associated with taking these drugs has come under increasing scrutiny as a potential cause of some of these ill effects.

Meanwhile, various liver diseases, both caused by alcohol abuse and other factors, have been increasing in prevalence.

Around 75-100 million Americans are estimated to have Nonalcoholic Fatty Liver Disease, or NAFLD, characterized by excessive fat deposits in the liver. It may not produce symptoms, but in about 25 percent of cases, it can progress to more serious diseases.

Previous research indicates that the liver acts as a “firewall,” capturing gut bacteria escaping into the bloodstream. This establishes a link between what happens in the gut and in the liver.

A 2014 study from the Mayo Clinic found that regular users of proton pump inhibitors have a less diverse microbiome, putting them at higher risk for infection by dangerous microbes such as Clostridium difficile, along with vitamin deficiencies and bone fractures.

The new UCSD-led study found that proton pump inhibitors allow greater growth of Enterococcus in the intestine. Some of the bacteria migrate to the liver, causing inflammation.

In the mouse models, liver inflammation promoted progression of Non-Alcoholic Fatty Liver Disease, Non-Alcoholic Steatohepatitis, and alcoholic liver disease. The mice were either given a proton pump inhibitor or genetically engineered to lack acid production. Some were also given alcohol, to cause alcohol-induced liver disease.

Data from healthy human volunteers indicated that the mechanism found in mice could be at work in people. These volunteers, who were not previously taking proton pump inhibitors, took the commonly used generic PPI omeprazole for 14 days. Levels of Enterococcus rose after the treatment, according to stool samples.

Records of 4,830 chronic alcoholics were examined for the study to assess their risk for a diagnosis of alcoholic liver disease over 10 years. For the 1,024 active PPI users, the risk was 20.7 percent. For the 745 who had previously used proton pump inhibitors, the risk declined to 16.1 percent. And for the 3,061 who had never used PPIs, the risk fell to 12.4 percent.

“Although obesity and alcohol use predispose a person to acid reflux requiring antacid medication, many patients with chronic liver disease take gastric acid suppressive medications without appropriate indication,” Schnabl said in a UCSD statement. “We believe clinicians should consider withholding medications that suppress gastric acid unless there is a strong medical indication.”

In some cases, those with acid reflux or heartburn can reduce or eliminate symptoms without drugs, by changes in diet or by losing weight.