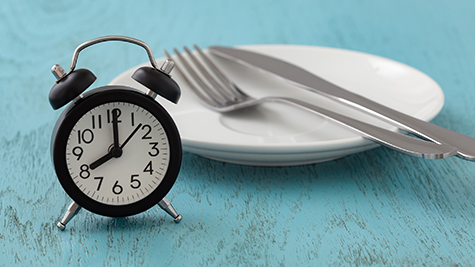 Various versions of the intermittent fasting diet appear to have weight loss benefits. A new study investigating why they work concludes that circadian rhythms are key. Intermittent fasting has become popular, but how does it work? While the modern world appears awash with fad diets, people seem to be giving a fair bit of attention to intermittent fasting. As its name implies, intermittent fasting involves eating nothing for extended periods of time. Some studies have found that this type of diet is beneficial, but exactly why it benefits health is not yet clear. Recently, a group of scientists at the University of California, Irvine investigated the impact of fasting on our circadian clock.

[For more information of fasting and different methods of fasting, the FoodTrients team is reporting on the latest research and encouraging results of fasting. See FASTING – IT’S EXPANDING LIFESPAN AND ‘HEALTHSPAN’  and WHY FASTING MIGHT BE THE BEST MEDICINE FOR LONGEVITY]

Daily sleep-wake cycles, or circadian rhythms, drive the ebb and flow of human life; they control much more than just our sleepiness levels. Our 24-hour cycles involve metabolic, physiological, and behavioral changes that impact every tissue of the body. Perhaps the most well known way to influence the clock is via exposure to bright lights, but this isn’t the only way; food intake also impacts the clock. We are slowly beginning to understand how eating plays a role in modulating circadian rhythms, but we know even less about how a lack of food might affect rhythms. Fasting and circadian rhythms The authors of the new study were particularly interested in learning about how fasting influenced circadian rhythms in the liver and skeletal muscles. The researchers published their findings in the journal Cell Reports. Fasting is a natural phenomenon for most animals, because food is not always readily available. In times of hardship, certain metabolic changes occur to allow the body to adapt. 16:8 fasting diet actually works, study finds According to a recent study, the 16:8 fasting diet could help people with obesity lose weight and lower their blood pressure. For instance, when glucose is scarce, the liver begins to create ketones from fatty acids, which the body can use as an emergency energy source. A host of fasting-induced transcription factors drive these metabolic changes.

These transcription factors also seem to influence circadian rhythms. As an example, one study split mice into two groups; the researchers put one on an intermittent fasting regime, and they allowed the second to eat whenever it liked. Both groups consumed the same amount of fat and calories; however, despite having the same energy intake, mice in the fasting group did not develop obesity or metabolic disorders as the other mice did.

Also, importantly, the authors noted that the animals’ circadian oscillations were more robust in the fasting group. As the authors of the recent study point out, “Fasting appears to be a strong metabolic cue to entrain rhythmic gene expression.” Scientists believe that having more clearly defined cycles might be part of the reason that fasting promotes good health. Rhythmic fasting genes The most recent study also involved mice. While the animals adhered to 24- hour periods of fasting, the scientists measured various physiological functions. They saw that while fasting, mice used less oxygen and energy. However, as soon as the mice ate, these gene-driven physiological changes were reversed.