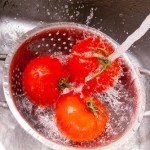 “Depending on where you live, you and your family could be drinking a cocktail of various contaminants,” says Paul Pestano, an Environmental Working Group (EWG) research analyst and a lead researcher on the new EWG’s Online Filter Guide. The guide offers options and tips to people who want to provide clean drinking water to their families.

A glass of water from the kitchen sink can often contain a number of contaminants, including known and probable carcinogens, substances toxic to the endocrine and nervous systems and chemicals that may have risks to pregnancy and development. Tap water contaminants come from a wide variety of sources. Among the major culprits are pesticides and chemicals from fertilizer- and manure-laden farm runoff; factory discharges; polluted runoff from wastewater treatment plants; and pollutants that leach from pipes and storage tanks.

As many people are unaware, one important source of tap water pollution is the treatment process itself.  Municipal water treatment plants use chlorine or a chlorine compound called chloramine to kill disease-causing bacteria in source water.  But when these chemicals react with rotting organic matter such as manure, sewage, dead animals and plants, they form toxic pollutants called trihalomethanes and haloacetic acids. Technically, these unwanted chemicals are known by the euphemism, “disinfection by-products,” but we call them what they are:  water treatment pollutants, or toxic trash.

Scientists suspect that trihalomethanes in drinking water may cause thousands of cases of bladder cancer every year. These chemicals also have been linked to colon and rectal cancer, miscarriages, birth defects and low birth weight. California public health officials reviewed the research around trihalomethane contamination in 2010 and determined that to reduce the risk of bladder cancer to no more than 1 in a million, the drinking water standard would need to be set at 0.8 parts per billion, which is 100 times lower than the current legal limit set by EPA.

“We must do a better job of keeping farm runoff, sewage and other pollutants from getting into our drinking water in the first place,” said Renee Sharp, a senior scientist at EWG.  “By failing to do so, Congress, the EPA, and polluters leave no choice for water utilities but to treat dirty water with chemical disinfectants. Americans are left to drink dangerous residual chemicals generated by the treatment process.”

EWG is calling on federal officials to:

To reduce exposure to trihalomethane and many other pollutants in drinking water, EWG recommends consumers use a water filter system. EWG has released its online water filter guide, which helps consumers figure out which filter is best for themselves and their families.