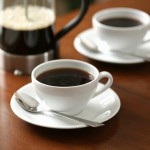 The journal Diabetologia recently published the finding of Harvard researchers of a reduction in the risk of developing type 2 diabetes among men and women who increased their daily intake of coffee.

For the current study, Drs Frank Hu and Shilpa Bhupathiraju of Harvard School of Public Health’s Department of Nutrition and their associates utilized data from 48,464 participants in the Nurses’ Health Study, 47,510 women enrolled in the Nurses’ Health Study II, and 27,759 men who took part in the Health Professionals Follow-Up Study. Dietary questionnaire responses provided by the subjects every four years for two decades or more were analyzed for the intake of regular and decaffeinated coffee.

Over the studies’ follow-up period, 7,269 men and women were diagnosed with type 2 diabetes. Among those who increased their coffee intake by one cup or more per day over four years, the risk of diabetes over the following four year period was reduced by 11% in comparison with those whose intake remained unchanged. Decreasing coffee by a cup or more was associated with a 17% greater risk of developing the disease. Drinking at least three cups coffee per day was associated with a 37% lower risk than consuming one or fewer cups daily.

The authors observe that “These changes in risk were observed for caffeinated, but not decaffeinated coffee, and were independent of initial coffee consumption and 4-year changes in other dietary and lifestyle factors.”