Food From Cans Lined With Bisphenol Can Increase Your B.P. 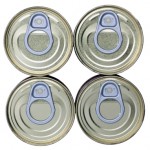 Having food or drinks from cans lined with the chemical Bisphenol A (BPA) could heighten your blood pressure, says a new study.

BPA, a chemical used as an epoxy lining for cans and plastic bottles, is everywhere, and its consumption has been associated with high blood pressure and heart rate variability.

The researchers conducted a randomized crossover trial recruiting 60 adults, mostly Korean women, over the age of 60 from a local community center. Each trial member visited the study site three times and was randomly provided with soy milk in either glass bottles or cans. Later urine was collected and tested for BPA concentration, blood pressure and heart rate variability two hours after consumption of each beverage.

Soy milk was the ideal beverage for the test because it has no known ingredient that elevates blood pressure, researchers said.

Hong suggests consumers to try to eat fresh foods or glass bottle-contained foods rather than canned foods in the hope that manufacturers would develop and use healthy alternatives to BPA for the inner lining of can containers.

The findings are reported in the American Heart Association’s journal Hypertension.