Don’t Let Jet Lag Be A Drag On Your Vacation 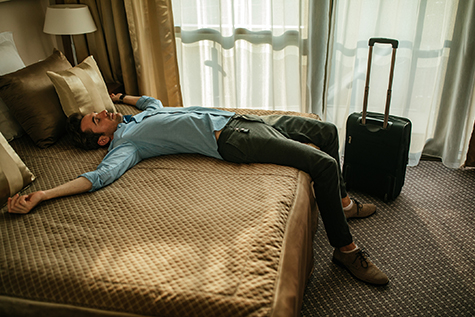 We like to think we have control over our bodies, but the opposite is often true. Such is the case with circadian desynchrony, commonly known as jet lag.

Exhaustion. Gastrointestinal discomfort. Headaches. Difficulty concentrating. Trouble falling asleep or staying asleep. These common jet lag symptoms have the power to put a damper on a dream vacation or ambitious business trip. Unless you figure out how to game your own system.

Senior experimental psychologist John Caldwell has spent the bulk of his career researching the effects of sleep deprivation and sleep restriction, while also studying countermeasures that sleep-deprived people can use to function better. Much of his research was conducted within the military aviation community, and it helped fuel insights for the book “Fatigue in Aviation: A Guide to Staying Awake at the Stick,” which he co-wrote with J. Lynn Caldwell.

Caldwell says that while our bodies are able to adjust to about one time zone change per day, jet lag sets in when we cross three or more of them because it wreaks havoc on our circadian rhythms. That’s a fairly new phenomenon, historically speaking. “People now can fly from New York to Paris in nine, 10 hours, whereas in 1923 you did it on a ship and it took you six days to get over to Europe,” Caldwell says. “We just haven’t evolved to the point where we can rapidly change those rhythms because it’s a relatively recent thing.”

While you can’t banish the effects of jet lag completely, scientists and physicians agree that there are things you can do to help adjust to a new time zone more quickly. Here’s what the professionals suggest to combat jet lag. 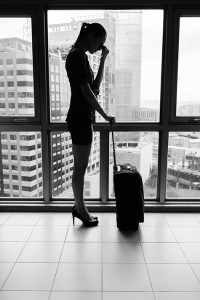 Work to align your sleep schedule with your destination: Because your body can naturally adjust to about only one time-zone change per day, you’ll want to manually adjust your schedule, and that means changing your bedtime to be better mesh with the destination to which you’re traveling. Ranit Mishori, a professor of family medicine at Georgetown University School of Medicine, travels frequently to Europe, Africa and the Middle East for both personal and professional reasons. To be ready to hit the ground running when she arrives, she starts adjusting her bedtime two to five days in advance to match the local time at her destination. “That means going to bed earlier when going east and waking up much earlier,” she says. “When I come back to the U.S., I do the same but in reverse.”

Caldwell creates a timetable so that, at a glance, he can see what time it is at home and at his destination and plan accordingly. “A lot of times, when you look at that table, right away you’re going to see where you’re going to have your biggest problems,” he says. If he’s just traveling for a quick work trip and will only be gone a couple of days, he avoids gradual adjustment. Instead, he tries to plan any meetings at a time when he would be awake and alert back home.

Time your light exposure right: Circadian rhythms are influenced by sunlight. While travel may make those rhythms hurly-burly, you can help get them on track either with exposure to or avoidance of light, says Pradeep Bollu, associate director of the University of Missouri Health Care Sleep Disorders Center in Columbia, Missouri. When traveling east, your biological clock will be behind. “Melatonin and avoiding bright light in the evening can help with advancing our biological clock,” he says. “Similarly, bright light exposure after waking up also will help advance our biological clock to suit the new time zone.” When traveling westward, he adds, the biological clock is ahead of the latest time zone. He suggests gravitating toward bright light in the evening and exercising to stay awake later and sleep longer.

An online calculator, such as Jetlagrooster.com, can also be helpful. It provides a brief plan to avoid jet lag, sharing the ideal time to get to sleep and the ideal time for light exposure.

Pack the melatonin: A number of physicians interviewed for this story suggested taking melatonin, which is a hormone that is produced naturally in the body and helps you sleep. “Taking a very small dose helps to recalibrate its release so that it is in sync with the time zone of your destination,” says Kern Singh, a spine surgeon in Chicago with Midwest Orthopaedics at Rush. Singh says he takes 5 milligrams of melatonin on the plane and then again when he lands. “I time the dosing depending upon the time zone of my destination. For example, if I am leaving for Europe and it’s 3 p.m. in Chicago but its 9 p.m. in London, I take the melatonin right away so I fall asleep at the appropriate time of where I am traveling to,” he says.

Turn your wine into water: Having a glass of wine or two on the plane may sound tempting, but it could negatively affect your sleep, which could worsen jet lag, says Quay Snyder, president and CEO of Aviation Medicine Advisory Service of Centennial, who advises pilots on staying in top condition while in the air. “It definitely has a sedating effect as far as getting someone to sleep, but it destroys their rapid eye movement sleep so their actual mental recovery is reduced,” he says. Instead, he says, be sure and drink plenty of water so that you stay hydrated while traveling.

Seek medicinal help: You can always ask your doctor for some, if you’re so inclined. Bruce Stephen Rashbaum, owner and medical director of Capital Center for Travel and Tropical Medicine in Washington, D.C., regularly counsels patients on jet lag. He considers prednisone, which is a prescription corticosteroid, to be the most effective tool for jet-lag recovery. He instructs patients to take the medication when they land, which is typically early in the morning, and again in the late afternoon and the next day. “Our bodies have a gland called the adrenal, which releases a prednisone equivalent around 5 a.m. and 5 p.m.,” he says, adding that the addition of a little extra prednisone, by prescription, mimics what the adrenal gland would normally do on its own and can help reset the body’s clock. “It is this simple ritual that works nearly every time,” he says. Caldwell, the sleep researcher, says that if he has a meeting or presentation abroad, he’s not averse to using prescription medications to help him sleep. “I’m actually not a medication phobic person, so my go-to is sleep medication at night with lots of caffeine during the day,” he says.

Everyone responds to jet lag differently. For those who suffer, the first week will usually be the most challenging, but after that, your body should start to bounce back. Maybe it’s the excuse you need to book that longer vacation and make the most of it.