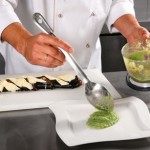 Chemotherapy took its toll on Steven Satterfield. The co-owner and executive chef of Miller Union in Atlanta lost his hair, his spunk, and his skin turned grayish-green.

But Satterfield, a local and nationally acclaimed chef, battled back by turning to what he loves and understands well _ the health benefits of eating nutrient-dense, fresh, and locally grown fruits and vegetables.

Diagnosed in February 2012 with stage III testicular cancer, Satterfield underwent surgery and three rounds of chemotherapy _ one week on, and two weeks off. By day 6 and 7 during the on-weeks, Satterfield, known for boundless energy, was virtually bedridden.

During chemotherapy, Satterfield gave in to weird cravings _ like sudden urges for spicy Thai food. But he also satisfied his continuous yearning for carbs by filling up on vegetable-laden pasta dishes and a Gumbo z’Herbes, a green gumbo, traditionally served at Lent and packed with greens _ collards, kale, turnip greens and spinach.

The way he nourished his body during his cancer journey helped him get through a tough time and paid off in health.

Just one week after completing chemotherapy in June of last year, Satterfield returned to work at the restaurant full-time. During a recent afternoon, clad in jeans and plaid shirt, and sipping sparkling water, the chef said he believes his vegetable and fruit diet helped him bounce back fast.

Satterfield is part of a growing number of cancer patients paying closer attention to nutrition every step of their journey. It’s no longer considered, “alternative” care according to doctors. Instead, eating a well-thought out diet is playing a more central role in overall care.

Shayna Komar, a registered dietitian who works at the Cancer Wellness center at Piedmont Hospital in Atlanta, said healthy foods keep the body strong during treatment. Studies show people who are well nourished have shorter hospital stays after surgery compared to those who arrive at the hospital malnourished, she said. Healthy eating also helps wounds heal faster. On the flip side, patients with poor diets including those who lose too much weight during chemotherapy sessions may need to put their treatments on hold.

“They ask me what should I eat?” said Kucuk. “And generally, the first thing I say is ‘eat a healthy diet.’ Eat 8 to 9 servings of fruits and vegetables a day, or at least five.” But knowing the importance of healthy eating is just the first step. Kucuk believes doctors need to help patients turn that knowledge into changes in diet. He said he makes good nutrition a priority, giving the subject just as much attention as discussing chemotherapy, radiation and treatment side effects. Kucuk believes the vast majority of doctors still fall short in giving nutrition enough consideration when discussing care with patients.

He said the anti-cancer properties of a diet full of fruits and vegetables can help prevent disease as well as offer therapeutic benefits while a patient undergoes cancer treatments. He’s seen firsthand how soy and tomatoes help minimize side effects from treatment. So when a prostate cancer patient complains of losing muscle or feeling depressed, he doesn’t immediately think of a pill to make them feel better. He encourages the patient to drink more soy milk _ a protein and vitamin rich drink.

Of course, it’s not always easy to eat a well-balanced diet during cancer treatments. It’s common for cancer patients to experience side effects such as nausea or food might taste “off.” Sometimes food tastes too salty, and Komar suggests drizzling the food with agave nectar can help offset that. She encourages a colorful plate with lots of color _ reds and greens and yellows, like a rainbow. She also recommends lean protein such as chicken, fish, nuts, seeds and eggs. And she encourages 5 to 6 mini meals throughout the day which can be easier on the stomach.

Satterfield has teamed up with Komar to teach a healthy cooking class revolving around fresh produce. The summer-time cooking demonstration included a zucchini dish with mint and garlic-chile oil, and a mix of purple and golden heirloom new potatoes with a lemon vinaigrette. Attendance for Satterfield’s class quickly filled up, and healthy cooking classes at Cancer Wellness center at Piedmont Hospital has doubled or even tripled in recent years, Komar said.

Now 43, Satterfield has been cancer-free for one year. He is working on a cookbook he calls a “field guide to Southern produce,” that will include a guide to shopping at farmer’s markets and making the most of community supported agriculture programs, where buyers pre-pay to get boxes of whatever is fresh off local farms.

Satterfield’s obsession with the freshest seasonal produce continues to be the centerpiece at his restaurant, which has been featured in national magazines such Food & Wine. The menu includes a cucumber, tomato and blackberry salad along with a griddled pastured chicken with grilled squash, cherry tomatoes, feta cheese, mint and almonds.

These days, he’s on the go. He tries to either run before work or bike to work when the weather is nice.

He continues to work on his book, and he’s at his restaurant at least 10 hours a day. The chef often begins his day with a fruit smoothie made with banana, frozen organic berries and almond milk. From there, he fills up on generous helpings of in-season fruits and vegetables and small amounts of protein ie., organic, humanely raised chicken and fish. He snacks on peaches and almonds. But he still gives into cravings from time to time _ whether it’s fried food or ice cream.

“I think it’s all about balance,” he said. “I try to make the most of my day by appreciating the amazing ingredients we get to work with… It’s nice to be able to truly enjoy life and be thankful for what you have.”

Here’s a look at power foods to fuel your body. (They are also considered cancer-fighting foods) Apples: They contain the antioxidant quercetin, which helps fight inflammation and are high in fiber and are lower in sugar than other popular fruits like grapes and bananas.

Cruciferous vegetables: We should be eating cruciferous veggies every day in some form. This group includes Brussels sprouts, broccoli and cabbage. They contain organosulphur compounds _ cancer can’t live in that type of environment.

Dark berries, such as blueberries, strawberries and raspberries: These have the highest concentrated amount of flavonoids (plant-based compounds with powerful antioxidant properties).

Dark greens, especially kale: Other dark greens include Swiss chard, spinach and collards. Greens essentially have no calories and carbs but are rich in vitamins, minerals and fiber.

Teas: Green tea and white tea have food enzymes and chemicals that have the potential ability to fight cancer and heart disease. Tea contains antioxidants, including EGCG, which is a unique catechin. It helps fight free radicals in our body that damage our DNA and potentially cause cancer. To add extra health benefits, try cooking with green tea.