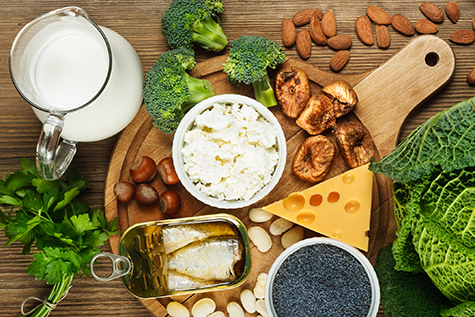 An article appearing on May 10, 2017 in the American Journal of Clinical Nutrition reports a lower risk of early menopause among women who consumed higher amounts of vitamin D and calcium. Premature menopause, defined as the cessation of ovarian function prior to the age of 45 years, affects approximately 10% of women.

“Laboratory evidence relating vitamin D to some of the hormonal mechanisms involved in ovarian aging provided the foundation for our hypothesis,” commented leader author Alexandra C. Purdue-Smithe. “However, to our knowledge, no prior epidemiologic studies have explicitly evaluated how vitamin D and calcium intake may be related to risk of early menopause.”

The investigation included 116,430 women who were between the ages of 25 and 42 years upon enrolling in the Nurses’ Health Study II. Questionnaires completed by the participants at enrollment and every two years thereafter provided information concerning lifestyle and medical conditions. Dietary information was collected five times during the course of the 20 year study.

Early menopause was experienced by 2,041 subjects over follow-up. Among women whose calcium was categorized as high, the risk of early menopause was 13% less than among those whose intake was low. Having a higher intake of vitamin D was associated with a 17% reduction in risk.

“The large size of this study allowed us to consider a variety of potential correlates of a healthy lifestyle that might explain our findings; however, adjusting for these factors made almost no difference in our estimates,” Dr Smith remarked. “In addition to placing women at higher risk of adverse future health outcomes, early menopause is also problematic as women are increasingly delaying childbearing into their later reproductive years . . . As such, it is important to identify modifiable risk factors for early menopause, such as diet.”