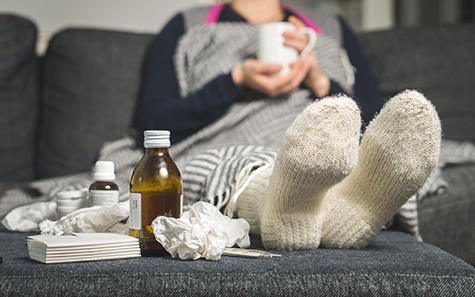 The graphic is called the “Geographic Spread of Influenza as Assessed by State and Territorial Epidemiologists.”

And it’s a doozy.

The interactive map on the Centers for Disease Control and Prevention website shows a yellow splotch in Colorado in October, then South Carolina, then California, and soon the flu is spreading across the nation, blanketing every state with misery, bringing us one of the most severe flu seasons in years.

In every pocket of the continental United States, people are experiencing flu symptoms right now, the first time that has happened in the 13 years of the CDC’s current tracking system.

The rate of flu hospitalizations — the number of people hospitalized with flu per 100,000 — nearly doubled earlier this month from 13.7 one week to 22.7 the next.

According to the health-news website STAT, there’s a “difference between an active flu season — when a large number of people get sick — and a severe season, when the numbers of people hospitalized for flu or who die from the infection are unusually high. It can be hard to tell in real time where a flu season will fall on the severity scale, because sometimes reports of influenza hospitalization and deaths — especially deaths among children — lag.

The report goes on to say that “this year is starting to look like a severe season, and maybe more severe than last year, which was also bad, said Dr. Dan Jernigan, head of CDC’s influenza division. ‘There’s lots of flu in lots of places,’ he said.”

CNN reported that as of this past Friday, Jernigan said the “this is the first year we’ve had the entire continental US at the same level (of flu activity) at the same time.” It has been an early flu season that seems to be peaking now, he said, with a 5.8% increase in laboratory-confirmed cases this week over last.

And according to USA Today, the CDC estimates that influenza has caused 9 million to 35 million illnesses, 140,000 to 710,000 hospitalizations and 12,000 to 56,000 deaths in the United States each year since 2010. In many cases, hospitalizations and deaths do not show up in official reports, for a variety of reasons — including the fact that most people with flu are never tested for it and that states are not required to report adult flu deaths.