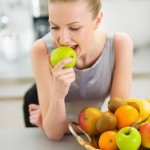 A new study suggests that women who ate a diet high in fresh fruits and vegetables as young adults were much less likely to have plaque buildup in their arteries 20 years later, compared with those who consumed lower amounts of these foods.

Previous studies have found that middleaged adults whose diet consists of a high proportion of fruits and vegetables are less likely to have a heart attack or stroke, but the relationship between fruit and vegetable consumption during young adulthood and heart disease later in life was less clear.

To study this concept, researchers evaluated the association between dietary intake of fruits and vegetables in young adults and the presence of coronary artery calcification (CAC) 20 years later. CAC scores, which were obtained using a CT scan, provide a direct estimate of the amount of plaque in the coronary arteries.

“It’s an important question because lifestyle behaviours, such as a heart healthy diet, are the foundation of cardiovascular prevention and we need to know what dietary components are most important,” Michael D. Miedema, M.D., M.P.H., a cardiologist at the Minneapolis Heart Institute, and the lead investigator of the study said.

Specifically, women who reported consuming the most fruits and vegetables (eight to nine servings a day for a 2,000calorie diet) in their 20s were 40 percent less likely to have calcified plaque in their arteries in their 40s compared with those who ate the least amount (three to four servings a day) during the same time period.

This association persisted even after researchers accounted for other lifestyle behaviours, as well as for their currentday diets, further demonstrating the role dietary patterns at younger ages may play.

Fruits and vegetables are packed with vitamins, minerals, fiber, antioxidants and other things that are known to promote good health. Plantbased diets in general have also been linked to greater longevity, less cancer, lower cholesterol, lower blood pressure and healthier body weight.

The research is set to be presented at the American College of Cardiology’s 63rd Annual Scientific Session.