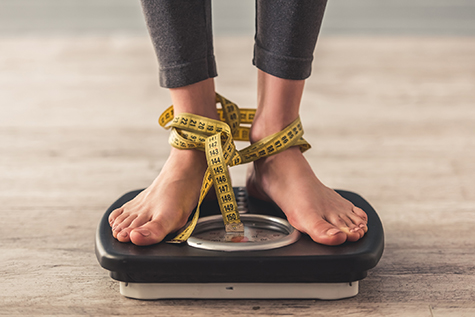 Weight gain isn’t just a number on your bathroom scale.

A new Stanford study has found that the entire body undergoes microbial, molecular and genetic changes changes for the worse when people pack on the pounds. When weight is lost, the systems return largely to their original state.

Even just a modest weight gain of about six pounds, researchers found, alters the body’s basic biology. — potentially boosting the risk of heart disease and diabetes. Bacterial populations morph. Inflammation patterns shift. There are genetic changes in the cardiac system.

“Your body is responding to a very stressful event,” said lead researcher Michael Snyder, a professor of genetics at Stanford. The study was published in Wednesday’s issue of the journal Cell Systems.

Previous research tended to link obesity to disease in a very general way, warning us that fat is a killer. But technological advances make it possible, for the first time, to record and compute the vast amount of information generated inside a thickening — or thinning — body.

Standing on a scale just offers one metric; a conventional blood test might measure 20 more. But new tools can now track fluctuations in millions of molecules in blood.

“We see the nuts and bolts of what’s happening,” Snyder said.

Trained at the California Institute of Technology, Snyder is a leader in the convergence of fast-moving scientific fields: genomics (the study of one’s DNA), metabolomics (study of metabolism) and proteomics (study of proteins).

In 2012, Snyder made headlines by analyzing, with unprecedented detail, his own blood. A team of 40 other researchers scanned Snyder’s blood, taken 20 different times, to learn more about the hidden dance between biochemistry and health.

This detailed view could lead to better health care, said Dr. Wendy Scinta, president of the Obesity Medicine Association, based in Syracuse, N.Y. While cautioning that the study is small, Scinta said it suggests why yo-yo diets can be harmful. It could also open doors for the role of microbes in heping control weight.

“It shows us that a little difference in weight can make a huge difference in the way the body functions, in both directions — weight loss and weight gain,” Scinta said. “It is something that we’ve sort of known — and now there is more proof.”

“It’s a landmark paper,” said Leroy Hood, founder of the Institute for Systems Biology, a multidisciplinary institute in Seattle dedicated to examining the interactions between biological information at many different levels. He was not involved in the study.

“Personalized medicine” is expensive but holds great potential, Hood said. “Each individual has to be viewed in the context of what they are by virtue of their genetics and their lifestyle and environmental exposures.”

The team studied 23 people with body mass indexes of between 25 and 35 kilograms per square meter. A BMI of 25 is on the high-end of normal; a BMI of more than 40 roughly equates to morbid obesity.

About half of the people were insulin-resistant or at risk of diabetes. The other half were insulin-sensitive or able to process insulin normally.

From blood samples, they pooled millions of pieces of information from the participants’ bacteria, proteins and molecules that reveal patterns in how genes express themselves.

Then participants received a high-calorie diet — about 1,000 extra calories per day for men, 750 for women — and after 30 days they had, on average, tacked on 6 pounds.

‘It’s not unlike what a lot of us have just done over the Christmas holiday,” Snyder said. “This is not outside the realm of what normally goes on.”

And with weight gain — moderate though it was — the participant’s underlying biological profiles shifted too.

“Most studies look at just one little part of something. It’s like making a jigsaw puzzle by just looking at the edge pieces,” he said. “We are trying to look at the entire puzzle, putting all the pieces together, which lets us see things much better.”

The scientists’ analysis revealed a shift in the body’s microbiome, the vast army of microbes that protect us against germs, breaks down food to release energy, produce vitamins and perform other tasks.

Microbial species changed with weight gain, the researchers found. For instance, populations of a bacterium called Akkermansia muciniphila, which is known to protect against insulin resistance, shot up. “This is a trend that could help understand the underlying dynamics that lead to diabetes,” Snyder said.

Secondly, there was a change in the body’s immune responses. Inflammation flared more in those with extra pounds, they found.

Finally, the molecular pathways associated with heart disease were activated. There was a shift in gene expression associated with increased risk for a type of heart failure called dilated cardiomyopathy, in which the heart cannot pump blood efficiently to the rest of the body.

This might explain, indirectly, why the risk of heart attack climbs with added weight, Snyder said. While the activated pathway is not causing heart issues, “it is a signal of what’s going on.”

Here’s the good news: When participants lost the weight, the rest of their body’s systems recalibrated back to their original states, the study found.

Snyder’s advice: “Don’t gain the weight. Exercise — and the food you eat — are absolutely critical.”

HOW TO FIND THE STUDY