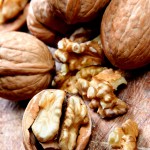 The current issue of the Journal of the American College of Nutrition published the finding of Sheila G. West and her associates at Penn State University of an improved response to stress among those who consumed walnuts and walnut oil.

“People who show an exaggerated biological response to stress are at higher risk of heart disease,” explained Dr West, who is an associate professor of biobehavioral health. “We wanted to find out if omega 3-fatty acids from plant sources would blunt cardiovascular responses to stress.”

In a crossover study, Dr West’s team gave 22 healthy men and women with elevated cholesterol an average American diet, the same diet in which walnuts and walnut oil substituted for some of the fat, or the same diet in which some of the fat was substituted with walnuts, walnut oil and flax oil for six weeks. After each six week period, participants received a different diet, so that each subject received all three diets by the end of the study.

Stress was induced in the study by asking participants to give a speech and by immersion of a foot in cold water, during which blood pressure was measured to evaluate the subject’s response. For those who received walnuts and walnut oil, both resting blood pressure and blood pressure during the stressful event were reduced compared with measurements in those who did not receive walnuts. Participants who received flax oil did not experience further benefits in addition to those conferred by walnuts, with the exception of a reduction in C-reactive protein, a marker of inflammation.

“These results are in agreement with several recent studies showing that walnuts can reduce cholesterol and blood pressure,” Dr West stated. “This work suggests that blood pressure is also reduced when a person is exposed to stress in their daily life.”