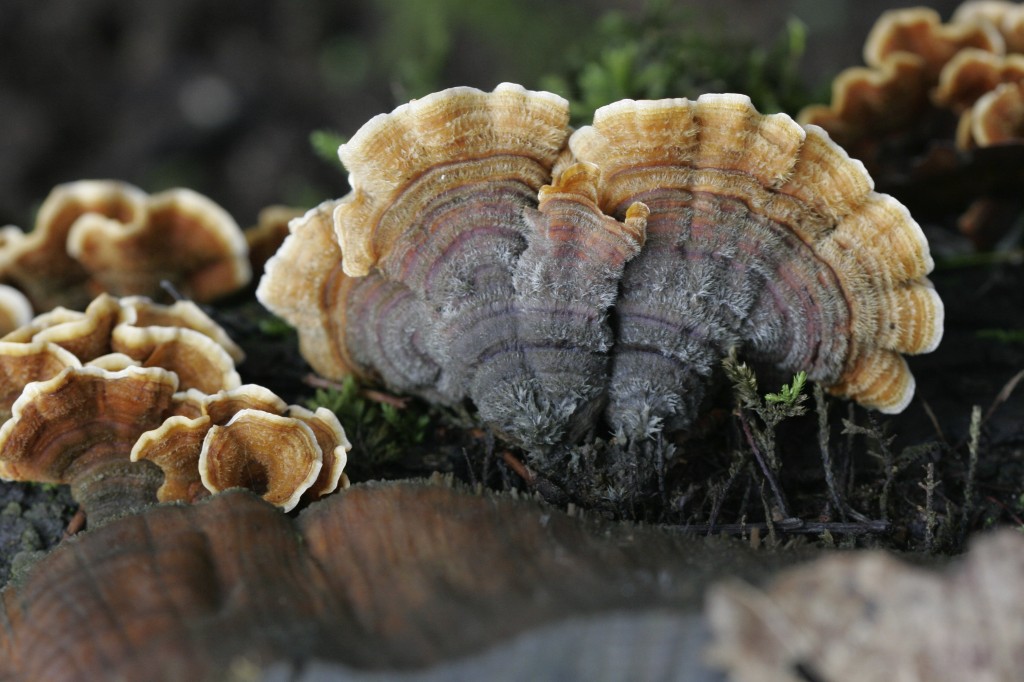 After a 2012 clinical study on the medicinal turkey tail mushroom showed that this functional food does improve the immune system of patients treated for cancer, research continues to grow in support of this healthful fungi. The National Institute of Health (NIH) funded study found that turkey tail mushrooms increased natural killer cells in women with breast cancer before they ended radiation therapy. Turkey tail mushrooms have been used as adjunct therapy to traditional cancer treatments in Japan for years for a variety of types of cancer including breast, head and neck, gastric, colon and liver. Read on to learn more about the power of turkey tail mushrooms and if they may play a role in your health. 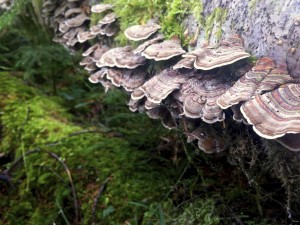 Turkey Tail or Trametes versicolor, otherwise known as coriolus, won’t be found in your local grocery store, though it is a very common mushroom that grows in the forest on stumps and tree branches. Found worldwide and especially in temperate, wooded climates, this mushroom is named for the circular pattern in which it grows which resembles a turkey tail. Like other medicinal mushrooms, turkey tail offers health promoting properties of vitamins, minerals, antioxidants, fiber and immune-boosting compounds like beta-glucans. Beta-glucans are a form of polysaccharide or complex carbohydrate component of the cell wall of mushrooms that has been linked to enhancing natural killer cell function and inhibit tumor cell growth. Beta-glucans are components of all medicinal mushrooms that are strongly linked with human health benefits and immune enhancement. Medicinally, especially in association with cancer, extracts polysaccharide krestin (PSK) or polysaccharide peptide (PSP) are used to support the immune system during treatment.

Turkey Tail mushrooms have been used throughout history in Chinaand Japan, Europe and the Americasfor immune boosting and anti-cancer potential. In Chinese medicine, turkey tail is called yun zhi. Dosing turkey tail extract appears to increase the immune activity through stimulating lymphocyte count, increasing natural killer cell activity, and increasing CD8+T and CD19+B cells – all types of cells that help regulate the immune system. There is also evidence that turkey tail mushrooms contain anti-viral properties, promising for use with the Herpes Simplex Virus and HIV. In addition, this mushroom has been used to treat chronic fatigue syndrome and as an anti-fungal agent. 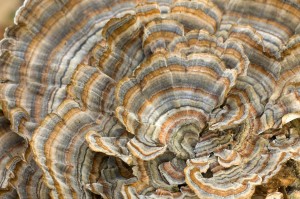 Turkeytail mushrooms are very commonly made into tea or extracts or used dried. In tea form, 20 grams of dried fruiting bodies up to three times per day has been studied. In capsule form, up to 5 grams per day of dried fruiting body has been used. During chemotherapy, many patients are given 3 grams of PSK, though in studies, up to 9 grams has been proven safe for cancer patients without adverse effect. However, it is imperative to discuss with your doctor if any of these preparations are appropriate for you, especially with other medications like chemotherapy. Animal studies including very high doses of turkey tail mushrooms showed no signs of toxicity even at levels much higher than would be prescribed for humans. Because turkey tail mushrooms stimulate the immune system, they may not be appropriate for certain types of cancer, auto-immune conditions, or with certain medications. Keep in mind that some turkey tail mushrooms have tested high in heavy metals such as cadmium, due to environmental pollution in the areas where they grow. It is important to purchase from a reliable source that test their products for contaminants. Further, always use extreme caution when searching for mushrooms on your own as many varieties could be toxic to humans.

References not embedded in the article: 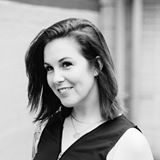 Ginger Hultin, MS, RD, CSO, LDN, is a health writer and owner of Champagne Nutrition specializing in integrative health and whole food-based nutrition. She serves as Immediate Past President for the Chicago Academy of Nutrition and Dietetics, Chair-Elect of the Vegetarian Nutrition Dietetic Practice Group and is a Media Representative for the Illinois Academy. Read Ginger’s blog, Champagne Nutrition, and follow her on Facebook, Twitter, Instagram and Pinterest.