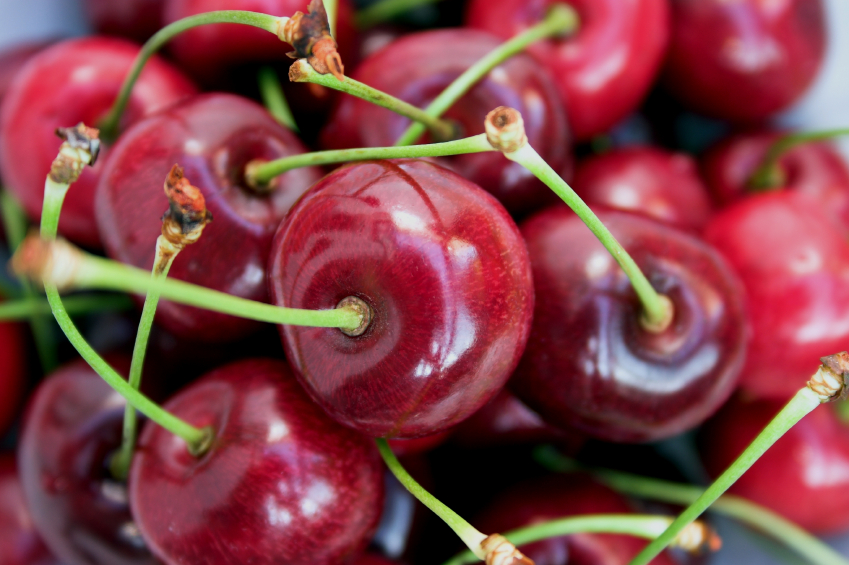 Cruciferous Vegetables:  These include broccoli, cauliflower, brussel sprouts, bok choy, mustard greens. They contain sulforaphane and indole-3-carbinol (antioxidants) and helps to convert unhealthy estrogens into healthy ones. No other group of foods currently has more scientific support suggesting it can help prevent breast cancer. For example, a study in China found cruciferous vegetable consumption was linked to better survival in breast cancer patients. Crucifers also help in the prevention of other cancers.

Cherries:  Contain perillyl alcohol, a powerful inhibitor of many kinds of cancer. Cherries are rich in anthocyanins, which are potent natural anti-inflammatories and antioxidants.  One large study demonstrated that a high intake of cherries and related fruits was linked to low breast cancer risk.

Garlic:  Contains a group of compounds known as organosulfides, which have a multitude of physiological effects such as reducing platelet aggregation, reducing blood lipids, killing bacteria and fungus, and stimulating the immune system. Organosulfides are most potent when the garlic is first crushed or diced and allowed to sit 10 minutes before using. Several studies have shown garlic may help confer some protection against several different cancers, including breast cancer.

Salmon:  Science suggests that women with increased levels of omega-3s (which reduces inflammation) in their tissues lower their risk of breast cancer. A study done at the University of Southern California showed that women who were postmenopausal and ate a small portion of fish daily were less likely to develop breast cancer than women who averaged less than one ounce a day. In addition, one recent randomized controlled trial showed omega-3s help prevent neuropathy in breast cancer patients. Conversely, a higher intake of omega 6’s – known to increase inflammation – has been associated with increased levels of inflammation in breast cancer survivors.

Turmeric:  Contains curcuminoids and other aromatic oils that exhibit anti-inflammatory and anti-cancer activity; as well as protecting against DNA damaging free radicals.  One randomized controlled trial, published in the Journal of Clinical Oncology, suggested that curcumin supplements can reduce skin damage due to radiation therapy in breast cancer patients.

Soy, such as miso, tofu, tempeh:  Contain what are known as phytoestrogens, or weak plant-like estrogens.  These phytochemicals are known as isoflavones; and eating soy foods, especially starting in adolescence, can reduce a woman’s risk of developing breast cancer, as one study of Canadian women suggested.  It’s also important to note that a recent review by the Block Center’s research staff did not find any indication that soy foods are potentially problematic for breast cancer patients (we suggest non-GMO soy foods).

Green Tea:  Contains catechins. Research suggests that catechins can inhibit telomerase (an enzyme) in cancer cells, with the goal of disrupting their immortality, and helping normalize cell replication. Green tea consumption is linked to a lowered risk of breast and other cancers.

Flaxseeds:  Contain significant amounts of cancer-fighting lignans, which may protect due to their estrogen altering abilities, anti-angiogenic properties, and the ability to reduce the chances of cancer cells spreading. In addition, adding flaxseed to the diet increased levels of endostatin, a natural anti-angiogenic, in breast tissue.

Keith I. Block, MD, is an internationally recognized expert in integrative oncology. Referred to by many as the “father of integrative oncology,” Dr. Block combines cutting-edge conventional treatments with individualized and scientifically-based complementary and nutraceutical therapies. In 1980, he co-founded the Block Center for Integrative Cancer Treatment in Skokie, Illinois, the first such facility in North America, and serves as its Medical and Scientific Director. The field of integrative oncology was formally recognized by the launching of Integrative Cancer Therapies (ICT). In 2000, Dr. Block was invited by Sage Science Press to be the founding Editor-in-Chief of this peer-reviewed journal, the first medical journal devoted to exploring the research and science behind integrative oncology. In 2007, ICT was accepted by Thomson Scientific for inclusion in the Science Citation Index Expanded™. Dr. Block is the Scientific Director of the Institute for Integrative Cancer Research and Education, where he has collaborated with colleagues at the University of Illinois at Chicago, the University of Texas M.D. Anderson Cancer Center in Houston and Bar Ilan University in Israel. Dr. Block is also on Dr. Andrew Weil’s faculty at the Arizona Center for Integrative Medicine, the University of Arizona College of Medicine. In 2005, he was appointed to the National Cancer Institute’s Physician Data Query (PDQ) Cancer CAM Editorial Board, on which he continues to serve today. Dr. Block has more than 90 publications in scientific journals relevant to nutritional and integrative oncology. He is also the author of Life Over Cancer, published by Bantam Hardcover Books, in April, 2009. His model of individualized integrative oncology continues to set the standard for the practice of this comprehensive approach to cancer treatment in the U.S.