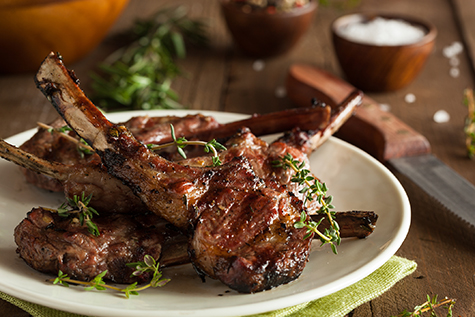 If you’re over 50, you likely grew up eating beef, a staple of most American diets for the last 50 plus years. I know I did.  Steaks on a summer grill and beef hamburgers are as much American tradition as apple pie.  It’s the reason we have so many (beef) burger businesses across the United States.

But there’s another red meat out there that you probably pass right by at your grocer’s.  It not only tastes great but, in many ways, is nutritionally superior to beef.  Let me tell you more about this special red meat and why, now that you’re older, you might want to replace some of your beef with it…

On special holidays when you were growing up, your mother may have cooked a rack of lamb for your family.  You may, or may not, have liked the taste.  Even though it’s a red meat just like beef, lamb comes from 1 year-old sheep.  Its taste is a little milder and sweeter than beef and its texture a little more tender, depending on its cut and how it’s cooked.

Yet, lamb never really gained the popularity of beef in the U.S. and Americans just don’t eat much of it. That could be one of the reasons heart disease levels are so high in America.

In Europe, though, lamb is very popular.  It’s also the preferred red meat in Mediterranean and Middle Eastern cuisines.  It has gained acclaim as one of the reasons the Mediterranean Diet is so heart-healthy.  Here’s why… 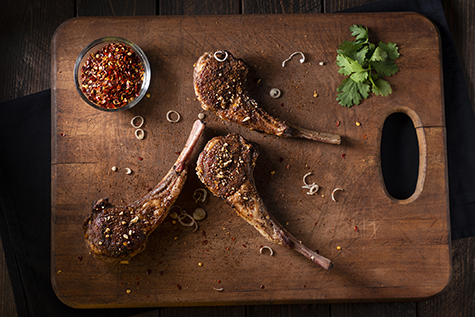 To begin, lamb is a pasture-fed red meat.  That means it free-range feeds on grasses and other plants rather than being fed a grain-based diet. Pastures are full of grasses and plants that are rich in natural phytonutrients that just aren’t in grain feeds.  In fact, these nutrients are ones we’ve come to learn are so healthy for our heart and brain – Omega-3 fatty acids.

Lamb contains high amounts of the energy-producing B-spectrum vitamins, including folate and B12. You need the B vitamins at every age, but they become especially important as you get older.  Niacin, or vitamin B3, is crucial for brain and joint health.  A study out of the University of California Irvine had shown that B3 not only helps prevent Alzheimer’s disease, but significantly reduces symptoms.  It was shown to reduce memory impairment in lab animals with Alzheimers disease.

B3 can also cut your risk of developing osteoarthritis by half.  It can also improve symptoms that you already have.  A recent study published in Inflammation Research journal reported that B3 improved joint movement, decreased inflammation, and allowed for decrease in pain medications.

People over 50 typically have vitamin B12 deficiencies which often result in fatigue, anemia, brain and heart health problems.  Seniors often need B12 injections or supplements.   But lamb is high in B12 and 1-2 servings a week can go a long way to prevent deficiencies.

B12 also helps counter homocysteine – a protein that can buildup in blood and create clots and trouble in the form of heart attacks and stroke.  Seniors typically have iron deficiencies which can result in anemia and its many symptoms – shortness of breath, fatigue, brain fog, heart palpitations, etc.  Lamb contains good amounts of iron that are easily absorbed through your intestine.

Lamb is also high in antioxidants like Vitamin A and the minerals selenium and zinc (from eating all those high A, mineral content plants). These help keep your immune system healthy.

Seniors also face muscle loss as they get older.  That is, if they’re not careful to keep their protein content high and build muscles doing resistance exercise.  Lamb is a lean meat that is high in protein.  In fact, it’s one of bodybuilder’s top choices for building muscle.  One 4-6 ounce serving of lamb can give you up to 30 grams of protein, which is about 1/3 of most senior’s daily needs.

If you like organ meats, the liver and kidney of lamb is milder than beef, and packs a lot of nutrition.   Lamb liver, for example, is high in both protein and Vitamin A.  Lamb kidney is high in protein and iron, but fairly low in calories.  These organ meats of lamb are especially suited for people with diabetes.  But, if you have kidney stones or gout, you’ll want to limit lamb organ meats as they contain a lot of purine and can add to stone formations.

As an American cardiologist, I see a lot of heart disease.  Most of this disease has been caused by diets too high in saturated fats from a lifetime of eating too much grain-fed beef.  The Institute of Food Technologists have reported that much of America’s heart disease could be prevented, or reduced, by replacing saturated fats in our diets with polyunsaturated fats.

If you want to build strong, healthy muscle, prevent anemia, as well as boost brain and heart health, try more of a Mediterranean style diet. Add more vegetables, a little fruit, and replacing 1-2 of your weekly beef meals with 4-6 ounces of lamb.