The Health Power of Coconuts 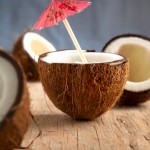 Anyone remember the 1994 exposé of movie theater popcorn? This cinema staple, known for its delicious taste and aroma, had been consumed for years by a public blissfully unaware of the fact that it was loaded with demonized saturated fat.

Movie theatre popcorn was (gasp) popped in coconut oil, an “evil” tropical fat that had no place in a healthy diet. As a result, concession stand popcorn sales dropped by half and many venues scrambled for an alternative.

Fast forward twenty years, and coconuts, which never went out of favor in their native countries, are now touted for their health benefits.

Coconut (Cocos nucifera L.) has nothing to do with cocoa or nuts. “Coconut” actually comes from the word “coco” which refers to the head or skull in Spanish. The coconut tree is a variety of palm that grows readily in tropical areas, particularly in sandy soil.

Known in India as kalpavriksha: the all-giving tree, coconut wood, leaves, sap, and especially the fruit, have been used by humans for a variety of uses for centuries.

Coconut milk has, in just a few short years, become a popular alternative to cow’s milk. Available in the dairy section of any major supermarket, this refreshing beverage contains no lactose and is a good choice for those who are lactose intolerant.

Mineral-rich coconut water has become a popular drink in the United States among health enthusiasts and others looking for a nutritious alternative to sodas.

Investigation of its antioxidant properties found that all varieties tested scavenged free radicals.

Is the Saturated Fat in Coconuts Unhealthy?

Although coconut does contain a high percentage of saturated fat, the majority is in the form of beneficial medium-chain triglycerides (MCTs). There is evidence that MCTs increase the burning of calories, thereby aiding in weight loss.

A randomized trial involving women between the ages of 20 and 40 years old determined that coconut oil reduced waist circumference while elevating HDL, the “good cholesterol”.

A study conducted in the Philippines found an association between increased coconut intake and greater levels of high density lipoprotein (HDL) cholesterol, while showing no significant effects on LDL(the so-called “bad” cholesterol) or triglycerides.

Another study of residents from West Sumatra, Indonesia, (who consume a significant amount of coconut) concluded that the fat from coconut did not predict coronary heart disease.

Coconut oil is also a treasured nontoxic treatment for hair and skin. Apart from its moisturizing effects, it has also been shown to be beneficial in helping complications of atopic dermatitis.

Monolaurin, a derivative of lauric acid found in coconut, has shown antibacterial effects against a number of organisms responsible for skin infections, including Staphylococcus aureus.