The Health Benefits of Citrus 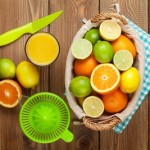 Citrus fruit is a well-established staple of the American diet. Even among those who tend to avoid fruits and vegetables, orange juice is often a favorite.

As it turns out, Citrus fruit, aside from being delicious, is a bountiful source of important nutrients.

Although vitamin C is the first that comes to mind, citrus, which includes oranges, tangerines, grapefruit, lemons, limes and, surprisingly, tomatoes, is also an excellent source of bioflavonoids.

While vitamin C is concentrated in the fruit’s interior, the best source of citrus bioflavonoids is in the peel and the whitish covering that adheres to the fruits’ sections.

The word flavonoid derives from the Latin word flavus, which means yellow. These numerous plant compounds are classified by their chemical structure.

Citrus bioflavonoids enhance the integrity of blood vessels. In fact, bioflavonoids were once labeled vitamin P for “permeability” (of the capillaries); however, this name has fallen out of use.

For the aforementioned reason, bioflavonoids have been suggested for such conditions as dilated capillaries, varicose veins, hemorrhoids,2 bruising, nosebleeds, bleeding gums and lymphedema.

The results of research indicate that citrus bioflavonoids — in particular nobiletin — could benefit people with arthritis.

In an experiment using rabbit chondrocytes (cartilage cells), nobiletin, as well as five other flavonoids, inhibited the production of inflammatory compounds, suggesting an ability to help protect the joints.

Nobiletin has also shown promise for the treatment of Parkinson’s disease. When administered to inflicted mice, dopamine release in the brain was enhanced and motor problems improved.

Research shows hesperidin and hesperetin scavenge free radicals and reduce inflammation, which could benefit a variety of conditions. The bioflavonoid hesperidin has been shown to prevent cognitive impairment in mice whose brains were injected with a drug called streptozotocin.

Animals pretreated with hesperidin demonstrated improved memory and a reduction in oxidative stress, effects which could ultimately prove useful in the treatments of dementia and Alzheimer’s disease.