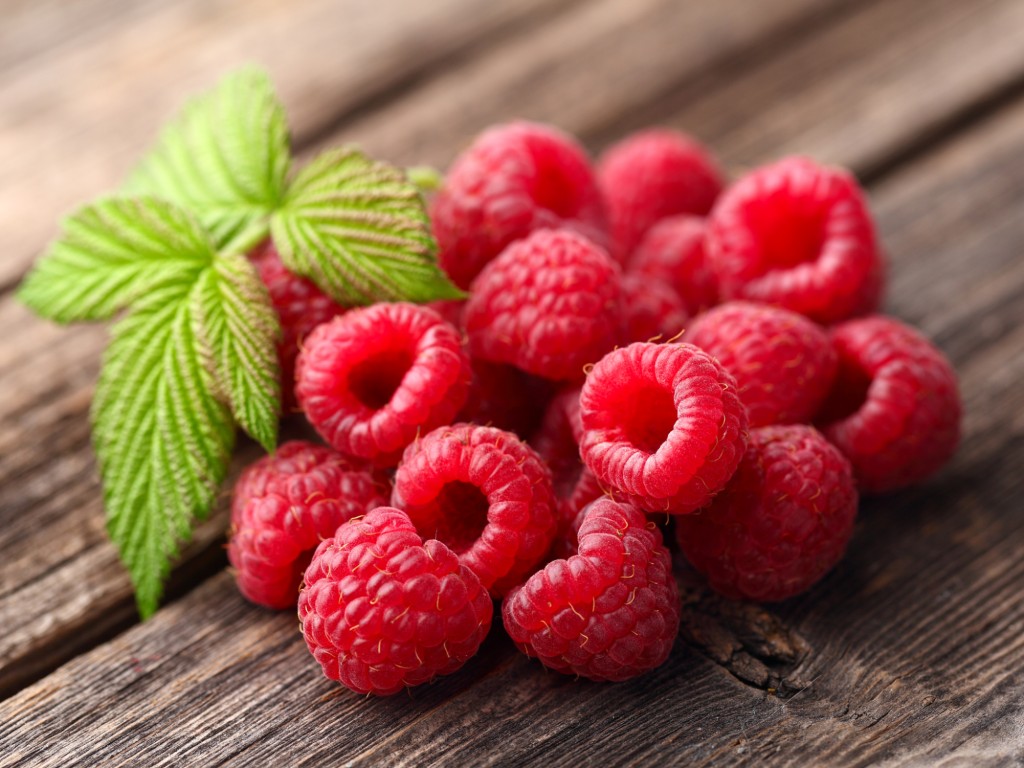 Although the exact origin of raspberries (Rubus spp.) is unknown, it’s believed they were cultivated in Europe more than 2,000 years ago and introduced to North America from eastern Asia through trading. The edible fruit is one of the most popular berries in the world, with top producers in Russia, the United States, Serbia, and Poland. Red and black raspberries are the most common varieties you will find at your local grocery store.

While all berries are recognized for their antioxidant value, raspberries stand out for their large quantities of hard-to-findellagitannins, which provide cancer fighting and anti-inflammatory properties. These potent phenolic compounds, combined with the fruit’s wealth of vitamin C and anthocyanins (evident by its deep rich red color), have contributed to raspberries possessing nearly 50% more antioxidant capacity than strawberries and ten times that of apples, making them one of the richest sources of dietary antioxidants.

Raspberries’ ability to suppress inflammation has sparked interest in its potential to treat arthritic conditions, which affect an estimated 46 million American adults. While non-steroidal anti-inflammatory drugs (NSAIDs) have become a mainstay for treating arthritic conditions by decreasing the production of cyclooxygenase-2 (COX-2), an important enzyme in the formation of inflammatory compounds that induce pain, they are often accompanied by unwanted side effects. Researchers at Michigan State University tested the cyclooxygenase inhibitory properties of anthocyanins in popular fruits, including raspberries, strawberries, blackberries, cherries, and cranberries. The findings showed that raspberries were second only to cherries in their ability to inhibit COX-2, with the fruit reducing the enzyme by 45%. This effect was comparable to NSAIDs and demonstrates that raspberries have promise as an effective and safe alternative to these drugs for quelling inflammation associated with arthritic conditions.

The strong COX-2 inhibitory effect of raspberries might be responsible for the results reported in a study published in the Journal of Agricultural and Food Chemistry. Scientists induced rats with arthritis and administered either raspberry extract or water for 30 days. At the end of the study, the experimental group had less severe arthritis compared to the control group, as raspberry extract significantly decreased inflammation and cartilage damage by 54 and 67%, respectively.

Although cancers differ from one another in certain characteristics, most share the common key initiator of DNA damage. Researchers discovered that mice adhering to a raspberry-rich diet for three weeks significantly reduced DNA damage by 59%. This was attributed to its high ellagic acid content that increased DNA repair, which prevented the occurrence of mutations that lead to cancerous cells.

A recent study published in the journal of Cancer Prevention Research shows promise for black raspberries against colon cancer. Mice were implanted with a specific DNA strand intended to accelerate intestinal tumor progression and then were randomized to a typical Western diet with or without freeze-dried black raspberries for 12 weeks. Compared to the control group, mice supplemented with black raspberries had a 45% reduction in tumor incidence and a 60% decrease in the number of tumors. Researchers believe that black raspberries suppress the production of beta-catenin, a protein involved in promoting tumor growth.

Black raspberries might also reduce cancer-promoting oxidative stress in individuals with Barrett’s esophagus, a complication of gastroesophageal reflux disease (GERD) that induces chronic injury to the esophagus lining and substantially increases the risk for fatal esophageal cancer. In a human study conducted by Ohio State researchers, patients with Barrett’s esophagus consuming 32 to 45 grams of black raspberry powder (equivalent to 1 to 1.5 ounces) for six months lowered 8-isoprostane and 8-OHdG concentrations, both markers of oxidative stress.

Growing evidence indicates that raspberries can favorably affect heart health by modulating high blood pressure and inhibiting LDL oxidation. With one in-three Americans suffering from hypertension, raspberry consumption offers a powerful dietary strategy for combating this silent killer. In a study reported in the Pharmacognosy Magazine, Chinese researchers evaluated the efficacy of raspberry extract to lower blood pressure in hypertensive rats. Compared to baseline, animals supplemented with raspberry extract reduced their mean systolic blood pressure by 12.2-16.1 mmHg after five weeks. The antihypertensive effect of raspberry is accomplished by promoting the availability of nitric oxide to endothelial cells, leading to arterial dilation that helps lower blood pressure.

LDL oxidation is a better predictor of cardiovascular disease than LDL cholesterol levels. Oxidized LDL cholesterol accumulates within macrophages, causing them to turn into foam cells that form the fatty plaques associated with atherosclerosis. Scientists at the University of California found that raspberries ranked second out of five tested fruits for inhibiting LDL oxidation, with a more potent effect than blueberries and strawberries.

Over one-third of adults in the US are obese. Some of the leading causes of preventable death including heart disease, stroke, type II diabetes, and certain types of cancer are related to obesity. Even worse, this epidemic is now spreading to children. Since 1980, the obesity rate for children and adolescents has tripled. Nearly 15% of children under age 19 in the US are obese and obese children are more likely to become obese adults. In fact, childhood obesity is likely to lead to more severe obesity in adulthood.

Raspberry ketone is a major aromatic compound of the red raspberry. Studies using experimental models of obesity have shown that raspberry ketones help prevent obesity and activate lipid metabolism. Specifically, when mice were fed a high-fat diet, raspberry ketones were shown to prevent the high-fat-diet-induced elevations in body weight, reduce accumulation of fat in the liver, and stimulate the breakdown of fat already stored in the fat cells.

While raspberries usually don’t receive the same research attention as other popular berries, they possess numerous health benefits that would match any berry. Their potent antioxidants, including ellagitannins and anthocyanins, along with their powerful ability to suppress inflammation make consuming raspberries an effective strategy for easing inflammatory arthritis, combating cancer, preventing diabetes, and enhancing cardiovascular support.