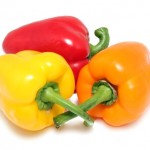 While the bell pepper takes a back seat to chili peppers in the research spotlight due to its limited amount of the compound capsaicin, this versatile vegetable shouldn’t be overlooked as it possesses an overwhelming abundance of powerful nutrients. With over 30 carotenoids, including lycopene, alpha-carotene, cryptoxanthin, beta-carotene, lutein, and zeaxanthin and rich in flavonoids like luteolin, hesperidin, and quercetin, bell peppers are antioxidant powerhouses. The combination of their antioxidant potency, along with their high levels of folate, vitamin A, dietary fiber, vitamin E, and vitamin B6 make bell peppers one of the most effective weapons against cancer, cardiovascular disease, eye disorders, and diabetes.

Bell peppers (Capsicum annuum) are part of the Solanaceae family and have been cultivated for thousands of years, beginning in South and Central America before being brought back to Europe from North America by Christopher Columbus. They are grown throughout the world, but mainly in China, Mexico, and in the United States. While green, red, and yellow bell peppers are the most common ones you are going to encounter at your local supermarket, other varieties such as orange, purple, brown, and black are also grown.

Although bell peppers don’t receive recognition as a vitamin C rich food, they contain a wealth of the vitamin, more thantwice that found in an average orange. Vitamin C is a vital component of any diet aimed at combating inflammation. A study published in the American Journal of Nutrition revealed that men with a higher dietary intake of vitamin C had lower levels of C-reactive protein (an inflammatory marker) and tissue plasminogen activator (a protein that dissolves clots inside arteries) compared to men with a lower dietary intake.

There have been many studies showing that the nutrients found in bell peppers possess strong anti-cancer activity, particularly in prostate, breast, and lung cancer. Dutch researchers treated a group of mice with human prostate cancer cells, and after feeding them both lycopene and vitamin E, the growth of tumors were reduced by 73%. However, each administered independently showed no effect on tumor size, suggesting a synergistic effect of these two compounds.

Apigenin is another component of bell peppers that may reduce breast cancer risk associated with hormone replacement therapy, particularly that which involves the use of a synthetic hormone called progestin that has been linked with the increased rate of breast cancer development in postmenopausal women. In a 2011 study published in the journal Cancer Prevention Research, researchers exposed rats to the synthetic progestin, medroxyprogesterone acetate (MPA), and then treated one group with apigenin. A second group serving as the control group received progestin (as medroxyprogesterone acetate) without apigenin. At the end of the study, apigenin-treated rats developed fewer breast cancer tumors compared to those that did not receive apigenin.

Furthermore, a recent French study involving more than 519,000 people showed a strong connection between vitamin B6 and lung cancer risk. After adjusting for smoking history, researchers discovered a 56% reduction in lung cancer risk in those with the highest plasma vitamin B6 levels.

At the heart of bell pepper’s benefits is its ability to support cardiovascular health. When plasma LDL cholesterol reacts with reactive oxygen species, it undergoes lipid peroxidation and becomes oxidized. Oxidized LDL cholesterol is more readily attracted into the arterial wall and starts the process known as atherosclerosis. Elevated plasma levels of oxidized LDL have been associated with increased risk for cardiovascular disease. With their high quercetin and luteolin content, bell peppers might protect against LDL oxidation. Japanese researchers discovered that luteolin ranked first and quercetin fourth in their ability to inhibit LDL oxidation out of ten tested flavonoids.

Consuming folate rich foods, such as bell peppers, appears to lower the risk for heart attacks as well. In the Kuopio Ischemic Heart Disease Risk Factor Study, researchers uncovered an association between a higher intake of folate and heart attack risk after analyzing data collected from 1,980 men without heart disease at baseline. Taking into account confounding factors of age, family history of heart disease, BMI status, cardiovascular risk factors, and dietary intake of nutrients over the 10-year study, scientists concluded that those with the highest folate intake were 55% less likely to have a heart attack compared to those with the lowest intake of the vitamin.

Folate may also have antihypertensive benefits due to its role in synthesizing nitric oxide, a molecule that dilates endothelial cells and improves blood flow, according to a study published in the journal Circulation Research.

Bell peppers’ arsenal of vitamin E, cryptoxanthin and dietary fiber make it a formidable weapon against diabetes risk. In a study performed by Finnish researchers at the National Public Health Institute in Helsinki, Finland involving more than 4,000 people, a diet rich in dietary antioxidants vitamin E and cryptoxanthin was linked to a decreased risk of type 2 diabetes by 31% and 42%, respectively.

According to research published in the journal Diabetes Care, dietary fiber intake less than 20 grams a day was associated with a significant increase in type 2 diabetes risk in 3,400 older men. Scientists also noted that low dietary fiber intake was correlated with increased levels of C-reactive protein and interleukin-6, suggesting that these inflammatory markers might play a role in diabetes development.

Caffeic acid, a constituent of bell peppers, might have anti-diabetic potential. In research done at the National Taiwan University in Taipei, Taiwan scientists found that caffeic acid stimulated glucose uptake by increasing the availability of glucose transporters in cells.

Two eye carotenoids, lutein and zeaxanthin, present in bell peppers, might protect against common eye diseases including cataracts and age-related macular degeneration. Both are pronounced in the macula lutea region of the retina, protecting photoreceptor cells from damage caused by ultraviolet light. A recent study published in the British Journal of Nutrition that involved 1,600 men and women showed a strong relationship between higher intakes of lutein and zeaxanthin and lower risk of nuclear cataracts. In addition, a study conducted at the University of Sydney revealed that those taking in the most dietary lutein and zeaxanthin reduced their risk of age-related macular degeneration by 65%.

More than just adding color and crunchiness to dishes, bell peppers pack a powerful punch of vitamins, minerals, and antioxidants that protect against the development of heart disease, cancer, and diabetes, three of the most common health problems in America today. Although they don’t receive enough attention in the research world, bell peppers should be an integral part of any healthy diet. To receive their amazing health properties, cook stuffed peppers or simply add the nutritious vegetable to salads, sauces, and main dishes.