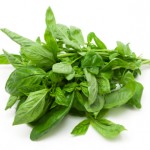 Derived from the Greek word meaning royal, basil is a versatile herb that has lived up to its pedigree. With its wealth of nutrients, from hefty amounts of vitamin K and calcium, to its high antioxidant oils, basil offers an array of health-enhancing benefits ranging from protection against DNA damage to combating stress. In addition, the peppermint-like leaves of basil are loaded with beta-caryophyllene, an anti-inflammatory compound that may treat conditions such as arthritis and inflammatory bowel disease. An abundance of evidence is emerging to support basil’s reputation as an herbal remedy for thousands of years, making this undervalued herb a formidable opponent against some of today’s most prevalent health problems.

Indigenous to Asia and Africa, basil (Ocimum spp.) is part of the Lamiaceae mint family. It’s grown in regions throughout the world, but primarily in France, Greece, Egypt, and United States. There are over 60 varieties of this potent herb, each differentiated by its leaf appearance and pungency. The most common form is sweet basil, which is most notably used in culinary practices.

Among basil’s most prized benefits is its ability to protect DNA, the storage form of genetic information. DNA is packaged in functional units called chromosomes. Chromosomes can be damaged by exposure to radiation, producing free radicals known as reactive oxygen species that alter the genetic material inside cells and cause DNA mutations that are linked to the growth of cancer.

Two water-soluble flavonoids, orientin and vicenin, present in basil, might provide protection against radiation at the cellular level. In a study published in the journal Radiation Research, mice received orientin or vicenin before being exposed to radiation in bone marrow cells. Scientists concluded that both flavonoids significantly reduced chromosomal damage, most likely because of their antioxidant properties.

Numerous studies have shown basil’s potential to inhibit the growth of pathogenic bacteria. These antibacterial effects are attributed to the main constituents in basil’s essential oils, including estragole, eugenol, rosmarinic acid,linalool, methylchavikol, and oleanolic acid. In a study done by Iranian scientists, basil’s essential oils were shown in laboratory tests to be effective in retarding the growth of bacteria strains Staphylococcus aureus, Bacillus cereus andEscherichia coli.

Furthermore, rosmarinic acid was shown to be effective in restricting the growth of Pseudomonas aeruginosa, a bacterium associated with lung infections, according to a research study in the journal Plant Physiology and Biochemistry.

Some species of bacteria have become resistant to multiple drugs such as antibiotics, making them more difficult to treat. Bulgarian researchers discovered that widespread drug resistant bacteria species Enterococcus, Pseudomonas,and Staphylococcus all were inhibited when exposed to basil’s essential oils.

As a rich source of both magnesium and beta-carotene, basil may support cardiovascular health. Increased dietary magnesium intake has been associated with lower levels of inflammation and endothelial dysfunction, according to a review published in the American Journal of Clinical Nutrition.

Researchers at the Netherlands National Institute for Public Health and the Environment (RIVM) assessed the relationship between carotenoids, tocopherols and vitamin C intake and heart disease deaths in elderly men, aged 65 or older, over a 15-year period. Taking into account confounding factors of age and smoking, scientists concluded that an increased intake of carotenoids reduced heart disease mortality by 20%.

Although acute stress is a normal part of life, chronic stress and stress related disorders such as anxiety can initiate changes in immune response that over time lead to suppression of immune function.

Basil has shown the ability to alleviate stress, according to a study published in the journal Evidence-Based Complementary and Alternative Medicine. Scientists examined the effects of basil extract on stress symptoms in 158 men and women. Patients received a placebo or 1,200 mg of basil extract per day for six weeks. At the end of the study, the treatment group showed a 39% decrease in general stress symptoms, such as sleep problems, exhaustion, and forgetfulness, and an 87.5% reduction in stress related sexual problems.

Another study conducted by Indian scientists revealed that 35 subjects with anxiety disorder taking 1,000 mg of basil leaf extract per day for 60 days reduced anxiety by 34.2% and stress by 27.5%.15 Basil leaf extract has a positive impact on the regulation of hypothalamo-hypophyseal-adrenocortical axis (HHA axis), a system that controls reactions to stress.

Basil may also modulate immunity directly. Researchers at All India Institute of Medical Sciences in New Delhi, India provided 22 men and women with either 300 mg of basil leaf extract or a placebo daily for four weeks. Participants who consumed the basil leaf extract had greater improvements in interleukin-4, T-helper cells and natural killers, all immunological parameters, compared to the group taking a placebo.

At the core of any diabetes management plan is the regulation of blood sugar levels. In a 4-week study conducted by Azad University of Agriculture and Technology in Kanpur, India 40 patients with type 2 diabetes received a placebo or2.5 g of a powdered dried basil leaf per day. At the end of the 4 weeks, the treated group recorded a 17.6%reduction in fasting blood glucose levels and a 7.3% decrease in postprandial blood glucose levels.

It is believed that one possible mechanism for basil’s blood glucose lowering effect is ursolic acid, which has been shown to act as an alpha-glucosidase inhibitor, meaning it reduces the absorption of glucose in the small intestine and prevents a rise in blood sugar levels.

While there are multiple compounds in basil’s essential oils, eugenol shows the greatest potential for helping people with arthritis. It has demonstrated the greatest ability of all basil essential oil compounds to decrease the activity of cyclooxygenase (COX), an enzyme that increases the production of pro-inflammatory cells.

A compelling study performed by the University of Science Malaysia in Kelantan, Malaysia sheds light on eugenol as an arthritis fighter. Researchers induced arthritis in the right paw and knee of rats, resulting in increased swelling. After 26 days taking ginger and eugenol oil, researchers observed significant decreases in both paw and knee joint swelling.

Although basil is primarily known as a flavor enhancer, mounting research indicates that adding this herb to your daily diet can provide anti-inflammatory, antibacterial, and anti-stress properties, making it a well-rounded fighter in the battle to improve overall health.